Euromonitor International was pleased to host a cocktail reception on 8 June 2016, inviting those in town for the Internet Retailer Conference and Exhibition. Michelle Grant, Head of Retailing at Euromonitor, and Zandi Brehmer, Consulting Practice Manager – Innovation at Euromonitor, presented along with JJ Hirschle, the Retail Industry Director at Twitter. The presentation focused on social media’s role in the digital retail revolution with a closer look at Twitter as a case study.

Still early stages for the digital revolution in retailing

The global retail industry is still in the early innings of the revolutionary shift from in-store purchases to digital purchases. In 2010, the penetration of digital commerce (the combination of e- and m-commerce) was only 3%. In 2015, it grew to 7%. By 2020, it’s expected to be 11%.

As digital commerce has grown, social media’s role in the path to purchase has increased in parallel to this growth. It now plays a key role in product research, the breadth of product selection, the purchase process, and post purchase.

Social Media’s Role in the Path To Purchase 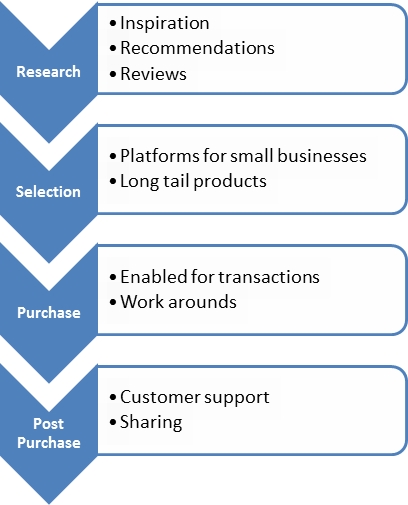 In a partnership with Twitter, Euromonitor Consulting studied holiday shopping behavior among Twitter users to identify where and how Twitter fit into the gifting season. 84% of Twitter shoppers used Twitter while planning their holiday shopping, and 71% of Twitter shoppers leveraged the tool in-store to: 1) look for retailer deals/coupons, 2) read product reviews, and, 3) compare prices.

User engagement with Twitter is consistent throughout the season. Post-holiday, top uses of Twitter were to share about gifts, conduct product research, and write reviews. Twitter shoppers describe the tool as helpful, convenient, and entertaining – further highlighting the strength and influence that social media brings to the path to purchase.

Social media will continue to grow in influence and impact on retailing – primarily around what and where to buy. Insights from the Twitter study revealed that 23% of users received a new mobile phone or tablet as a gift for the holidays, and the number one downloaded app was social media followed by games, email, and music/radio stations. While retailer tools are still relevant, social media is the fastest route to consumers in an increasingly noisy digital world.

The future of social media in the digital revolution

The second theme is social media’s role in creating a personalized retail experience. There will be constant innovation from social media companies to leverage their data to better drive sales for retailers.

The third key theme is that social media will evolve as new platforms become available. Online social behavior is ingrained now and here to stay. Any new platform, such as virtual reality, augmented reality and internet of things, will incorporate social features and it will be important for retailers to have strategies in place for all of them to address their use cases.

Coronavirus (COVID-19) has shaken up the consumer goods, services and payment industries in Sub-Saharan Africa, putting pressure on supply chains and depressing…

Retailers’ constant experimentation with new concepts and formats helps lay the groundwork for the industry’s future. For this reason, Euromonitor profiles…