In late December 2015, Procter & Gamble filed a lawsuit on behalf of its subsidiary Gillette against the Dollar Shave Club, seeking an injunction and damages due to alleged patent infringement.

An outside observer might wonder why Procter & Gamble bothered. Gillette has dominated the American razor market for over a century. Its razors are used by an estimated 750 million men in over 200 countries and it sold US$2 billion in razors and blades in 2014 in the US alone. The Dollar Shave Club, meanwhile, is an online outfit established in 2012 with a fraction of those sales, best known for a YouTube video in which founder and former improv comedian Michael Dubin danced with a bear and proclaimed “Our blades are f-[bleeped] great.”

But that silly video set off a chain reaction that shook the very foundations of the US$3 billion dollar US men’s shaving industry and led directly to December’s lawsuit.

With its simple subscription-based business model and memorable marketing, the Dollar Shave Club exploded in growth. From a self-reported US$4 million in sales in 2012, Dollar Shave now generates US$153 million in annual revenue, is valued at well over half a billion dollars, and has nearly three million subscribers (and it is no secret that the majority of these men were once using Gillette’s blades). 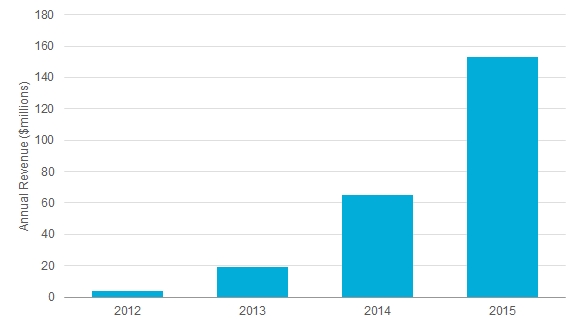 Others, seeing an opening, followed in Dollar Shave’s wake. The number two online shave club, Harry’s, is more tight-lipped about its sales, but is probably selling about US$50 million a year. It has a million subscribers of its own, plus its own factory in Germany. Other online sellers, including 800Razors and Bevel, continue to spring up as well.

Just a few years since the launch of Dollar Shave, online shave clubs are now a firmly established part of the shaving landscape in the US.

It is difficult to speculate on the outcome of the lawsuit itself (although Procter & Gamble has had some success before filing lawsuits to protect brands such as Oral-B from upstart competitors), but the main point of the lawsuit is symbolic: the years of professed indifference from Gillette and long-time number two Schick towards their online rivals are over. It is impossible to ignore the threat that Dollar Shave and Harry’s pose to the traditional business model of the men’s shaving industry in America any longer.

It is notable that the lawsuit is about intellectual property, as that highlights a key area of difference between the Gillette and the shave clubs: technological innovation. Gillette is known to go to extraordinary lengths in developing its new razors, reportedly maintaining top-secret research facilities where it employs aerospace engineers and uses razors with microscopic cameras so as to better understand how men shave. This devotion to research and development does not come cheap: the Mach3 is estimated to have cost three quarters of a billion dollars to develop (to say nothing of the cost of marketing it). With research expenditure like that, it is no wonder that Procter & Gamble places such great importance on protecting its intellectual investments.

Technological innovation remains a core of Gillette’s strategy and one that the shave clubs do not have the resources to match. Amid much fanfare, Gillette recently rolled out the FlexBall, a new way to adapt the razor to the curves of the face, and the ProShield, a cartridge innovation designed to reduce irritation when shaving over an area multiple times. Early indications are that both are selling well.

Impressive as these products are from a technical standpoint, however, product innovation can only do so much to stem the bleeding. Dollar Shave has been successful in realising that there is a large segment of men that have become jaded with regard to the latest shaving wizardry and no fancy new razor, no matter how impressive, is going to change that. Product innovation, though clearly important, will not by itself win back the men who have jumped ship.

The launch of the Gillette Shave Club in mid-2015, though, could do just that. Offering a similar service to Harry’s and Dollar Shave (automatically delivering cartridge refills to your door), it is unmistakably an attempt to take on the shave clubs on their own turf. At the same time, Gillette has begun introducing hard tags on its blades sold at offline retailers, removing the need to place them behind lock and key. These two moves will go a long way to removing the convenience gap that previously existed between Gillette and the online shave clubs, robbing the shave clubs of what has previously been a potent weapon in their marketing arsenal and making it more difficult to lure new customers.

That is related to another concern looming for the shave clubs, but more of their own making: marketing costs. There may not be a young man with internet access in America today who has not seen a sidebar advert for Dollar Shave or Harry’s, the direct result of the massive amounts of money they are both spending on advertising. An article in Advertising Age estimates that Harry’s spent US$63 million on advertising in 2014, well above its total revenue for the year, and that Dollar Shave is outspending even Gillette on television advertising, despite vastly smaller resources. If this advertising spending is translating into long-term subscribers, that should not present a problem. But if anything Gillette does convinces large numbers of men to defect back or substantially reduces the flow of new customers, this could become quite a serious issue.

So is the future bleak for Harry’s and Dollar Shave? Not necessarily. There are still plenty of reasons to assume that they can continue to grow strongly, even in the face of increased competition from Gillette.

Even with their millions of current subscribers, there are still tens of millions of American men who could conceivably be convinced to join an online shave club. That is not even counting the potential growth in the female market, where women are also frustrated with the razor status quo (exactly how many of Dollar Shave’s gender-neutral blades are being used by women is unknown, but could be as high as one fifth). The shave clubs’ marketing may be expensive, but it remains fresh and appealing, and the patent lawsuit only further plays into the David and Goliath narrative that has always been a key part of the shave clubs’ appeal.

The takeaway, then, is not that Dollar Shave and Harry’s are doomed – far from it. Investors are still willing to put money into them and their fundamental business models seem solid. Rather, it is that both have benefitted from being viewed as little upstarts undeserving of sustained attention from Gillette and Schick. But they are not upstarts any more, and that will mean playing a great deal more defence than they have had to previously.

The most important question in the US men’s shaving industry over the next few years is how well they can adapt to that new reality.

How Personalisation is Shaping Health and Beauty Sectors

Global Consumer Trends for 2022 in Eyewear

Following the sales decline in 2020 against a backdrop of gym closures and lockdowns due to the pandemic, a recovery was seen in 2021 as vaccination programmes…

2022 saw the beauty market recover, as pent-up demand was released. The outlook is, however, still challenging. With inflation-driven rises in the cost of…