For the past two years at least, the beer industry’s biggest talk has been about a potential consolidation move between Anheuser-Busch InBev and SABMiller Plc. For banks, the world’s number one brewer buying out or merging with the world number two brewer is a very lucrative financing deal. The latest estimate for financing required by A-B InBev has reached US$122 billion for buying a company valued at almost US$4.8 billion, according to 2013-2014 profits.

It might seem like a shrewd decision for the two brewers to combine, as SABMiller’s biggest competitor is A-B InBev competing in beer markets totalling at over US$20 billion. This is 35% of retail value sales for the British brewer and 15% for the Belgian-Brazilian entity. According to Euromonitor International, the overlap occurs in at least 67 markets, illustrating the degree of market commonality for both companies, as reflected by the bubble size below. 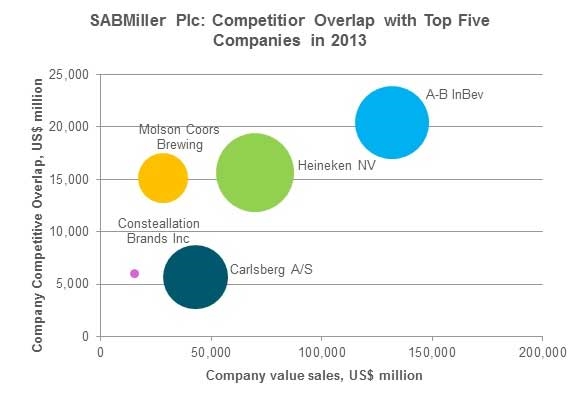 It seems that such a consolidation move is more enticing for A-B InBev than for SABMiller. The latter has shown signs that it seeks to avoid a takeover, as reflected in its action in 2014 to raise its market value. The merger of its bottling assets with Coca-Cola in South and East Africa in 2014, or its rebuffed bid for Heineken NV earlier the same year can be attributed to a defensive action against a takeover. Although SABMiller’s CEO, Alan Clark, has announced that the company is seeking more profitable options to counterbalance a stagnant beer market, and soft drinks are one of the options he has mentioned.

The combined share of the brewers will be a significant legal issue in their biggest market, the US. SABMiller’s MillerCoors joint-venture in the US with Molson Coors Brewing will raise an anti-trust issue considering A-B InBev’s almost 50% share of the US’s market volume. It might have to drop SABMiller’s US joint-venture deal. Another issue is the conflict that SABMiller’s partnership with Coca-Cola in Latin America presents, as Anheuser has a bottling and distribution deal with PepsiCo in the region.

A key gain for both companies comes from an increased geographic footprint, over market depth, as a consolidation move will increase their market presence in Africa and Latin America. The greatest gain for A-B InBev would be in the Middle East and Africa, since SABMiller sold over 5 billion litres of beer in 2013 as the region’s top brewer. Whereas SABMiller’s biggest gain would be in Latin America, with 15 billion litres of volume sales by A-B InBev, the region’s number one brewer. It is obvious there is much to gain in market presence for both companies, especially in emerging markets. The graph below highlights the potential advantage to A-B InBev in the MEA that can be derived from SABMiller’s extensive footprint in the region. 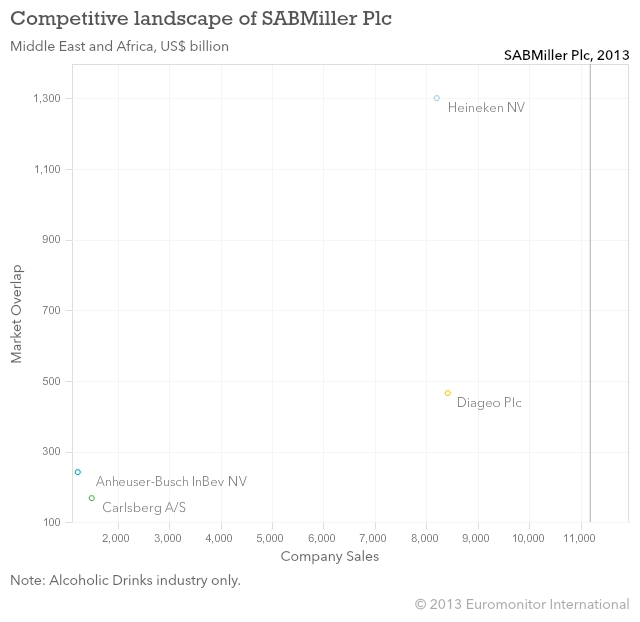 With A-B InBev set to gain from this venture, what’s in it for SABMiller? The issue goes beyond whether there is a mutually-beneficial relationship in such a merger. Even if mutually-advantages, would it be feasible considering the potential divestment required in key markets such as the US? A-B InBev might change its mind and avoid an expansionary strategy within a stagnant beer market and possibly opt to diversify its portfolio, as with SABMiller’s move toward the more dynamic soft drinks industry.