As explored in Euromonitor International’s new global briefing, “Analgesics Part 1: Global Trends”, although the global market for over-the-counter (OTC) analgesics is outsized within consumer health by cough, cold, and allergy medications (CCAs), the category totalled USD22.5 billion in 2016 global retail sales, an 11% increase since 2011. Driven by an ageing population as well as a high chronic disease burden from ailments, such as cardiovascular disease, obesity, and cancer, the market for analgesics is predicted to grow steadily over the coming years. 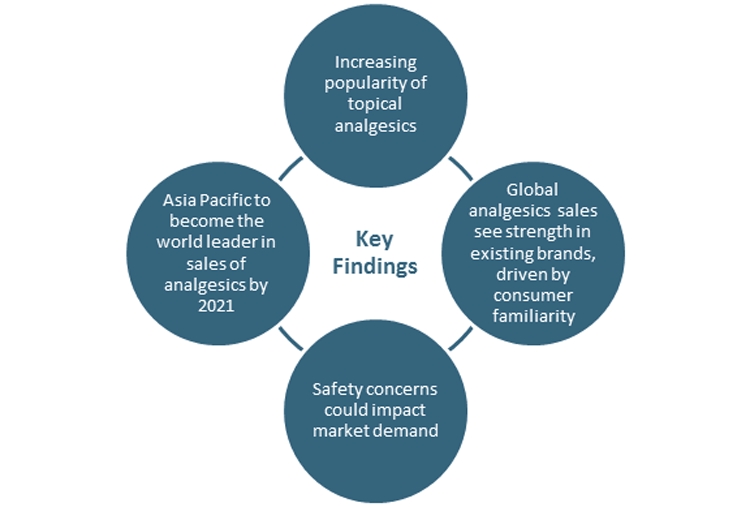 Analgesics is a large and diverse category which has seen slow but steady growth at a constant value CAGR of 2% over the review period and is expected to continue to grow at a projected CAGR of 2% looking forward to 2021. Globally, acetaminophen and ibuprofen remain the most popular OTC analgesics, though diclofenac and ketoprofen are both experiencing strong growth in regions  where the drugs are readily available on the OTC market. Because of the strength of the ingredients commonly used in OTC analgesics, as well as their potential for their overuse or misuse, access to analgesics can vary widely, even across markets with fairly similar macroeconomic and demographic characteristics. Many markets restrict the sale of analgesics to only chemists/pharmacies or drugstores/parapharmacies, where trained pharmacists can provide expert advice on proper usage.

Four countries (the US, China, Brazil, and Japan) individually generated sales of over USD1 billion in 2016 and together accounted for 40% of the total analgesics market. Though growth is expected to continue in these regions, the market will see the greatest overall increase in sales in the Asia Pacific region over the forecast period, leading Asia Pacific to take North America's place as the global leader   in analgesics sales by 2021, driven in large part by the growing popularity of topical analgesics. That said, the market is expected to grow fastest in the Middle East and Africa, with a forecast constant value CAGR of 5% to Asia Pacific's 4%, driven by the popularity of Western medicines and combination analgesics that are perceived to be more effective than single-ingredient  products.

Global sales in analgesics are heavily influenced by demographic and epidemiological factors like the increasing incidence of chronic non-communicable diseases (NCDs) like cardiovascular disease, obesity, and cancer. The global population of later-lifers (aged 60 ) is expected to grow to 2.2 billion by 2021, particularly in developing economies such as China, India, and Russia, which are expected to account for 60% of the growth in the later-lifer population by 2021. Additionally, a changing regulatory landscape hints at stricter times to come in many nations as both consumers and governments grapple with the side-effects of many OTC analgesics.

Trends toward healthier lifestyles will continue to influence both   the growth of topical analgesics as well as the type of ingestible analgesics consumers prefer, as consumers become more aware of the potential side-effects associated with their routine usage. Across regions, known and familiar brands will continue to be popular and expect to see positioning around demographic and lifestyle categories continue to grow as manufacturers work to customize analgesic offerings to specific groups.

Part 1 of this global briefing series explores the global and regional trends and developments in the analgesics market over the review period of 2011-2016 and the dynamics that will influence these products in the near future. Part 2 of the series will dive deeper into some of the other factors affecting the analgesics market, including the continuing influence of opioid products, the varying patchwork of drug regulations across regions, and trends in innovation among  analgesics.