A decade ago, there was skepticism at the idea of selling clothes online. However, apparel is now one of the biggest growth stories on the product-based side of the digital commerce universe.

Euromonitor International estimates that a total of US$1.7 trillion in goods will be purchased over the internet in 2020, representing an estimated 11% of total retail sales. Of all product-based categories purchased in the digital channel, the apparel and footwear category will contribute the most in terms of absolute value sales with an estimated US$142.1 in digital purchases expected to be added in the next five years. 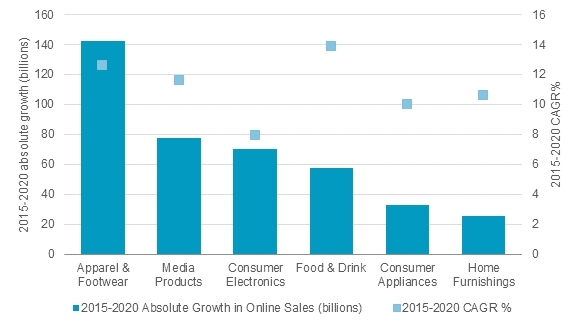 Digital’s role in the shifting apparel and footwear landscape

While digitally driven apparel retailing has benefited from website improvements such as, more detailed sizing information, the use of “virtual fitting rooms” and more favourable exchange and returns policies, the store-based shopping experience is nevertheless not being replaced by digital. Given that shopping for fashion continues to be a popular leisure activity in many markets, these expanding digital operations are being used to enhance the store experience and enable around-the-clock purchases.  As such, outlets are gradually evolving from mere transactional spaces to entertainment destinations. Start-ups such as Grabble, as well as buy-buttons from players such as Facebook and Twitter, are also helping to drive digital commerce in this category as apparel players embrace the direct connection to consumers that these sites provide.

As of 2015, 12.1% of apparel and footwear purchases globally were made through a digital channel, led by Asia Pacific, Western Europe and North America. Consumers in Western Europe and North America are comfortable with the multi-channel strategy by key players and the continual integration of physical and digital operations. As a result, services like click-and-collect, store pick-ups and store returns are becoming the “new normal” in the most developed part of the world. That being said, Asia Pacific with its rising middle-class and mobile-first mindset is a key region driving the expansion of online apparel and footwear sales over the forecast period.

While online sales in this category represent only a small percentage of total sales in many Asian nations, more than 20% of apparel and footwear sales in China and South Korea were made through the digital channel in 2015.  In particular, the online appetite for apparel and footwear in China has grown rapidly and sales are now higher than in the US. Euromonitor International predicts this trend will continue over the forecast period with China contributing half of the world’s absolute value growth for internet-based footwear and apparel purchases.

Chinese consumers are changing their consumption and lifestyle habits, as more industries embrace digital connectivity and anytime, anywhere commerce. Owing to the economic downturn and the increasingly rapid pace of working and living, digitally savvy Chinese consumers have been seeking more efficient, convenient and cheaper ways of purchasing, which resulted in a boost to digital purchases across all industries in 2015. Thanks to enhanced user experience and quicker internet, mobile devices also overtook PCs as home to the most digital commerce spend. This was buoyed by higher price tag items in categories like consumer electronics and appliances.

Of Chinese online respondents who have made at least one online purchase, 95.8% have bought apparel online at least once in the past, according to Euromonitor International’s 2016 Global Consumer Trends Survey. This was the highest percentage of the 20 markets surveyed, although more than half of the Chinese respondents reported not even doing so on a monthly basis.

CHART: Frequency of Online Apparel and Footwear Purchases in China 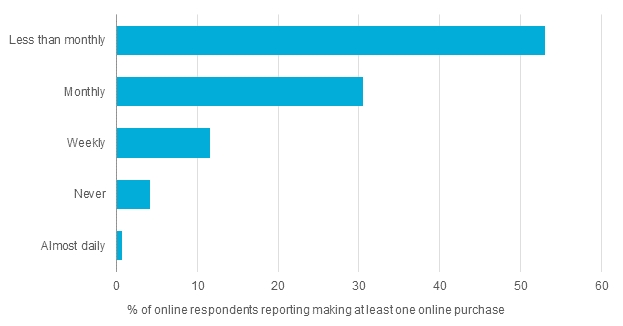 In the same global survey, Chinese consumers said they preferred the computer to the in-person experience as both the research and purchase channel for these products. Although behind the other two channels, nearly 40% of Chinese consumers surveyed reported using the mobile device for both the research and purchase channel of apparel and footwear products. This is up from the 33.1% of Chinese online respondents who reported making a similar purchase through their mobile device in 2014, based on Euromonitor International’s Hyperconnectivity Survey, and an indicator of the shift towards mobile-based commerce in China.

In general, online shopping is expected to further accelerate its development in China supported by the growing level of internet usage and increasing penetration of smartphones. To capture the rising demand for apparel and footwear through internet retailing, major internet retailers such as Tmall and JD are expected to expand their product offerings by launching more new brands over the forecast period. In addition, many players are engaging in cross-border e-commerce business in order to gain more market share over the forecast period.

For additional analysis on mobile shopping and retailers, please visit Google’s, “Shopping Micro-Moments Guide: How to Be There and Be Useful for Shoppers.” Euromonitor International worked with Google to provide insights in this report.

Food Manufacturers and The E-Commerce Effect

Trade Round Table - Roadmap to the Future

Euromonitor International’s Voice of the Industry: Retailing survey includes the opinion from more than 450 professionals working at retailers and consumer…

Explore how underlying drivers could change different consumer worlds over the next 20 years. In this report, Euromonitor outlines a vision for commerce in…