2014 should see Asia-Pacific become the world’s fastest-growing region for the 10th consecutive year. In this time, the region’s economy has increased by 73%. China alone has added US$5,705 billion (in 2013 prices) to its GDP – equivalent to another Japan - and the region’s population has expanded by 10.4%. Today, more than one in every two people in the world live in Asia-Pacific.

The Highs and Lows of Economic Growth

Growth in the region has been driven by China, with China’s growth having positive spillover effects on other economies in the region. With increasing turmoil in markets as a result of tightening money conditions (aka the Fed taper) the region will be split into stronger growth for those with solid macroeconomic fundamentals and weaker growth, with the threat of recession and even full-blown financial crisis, for those that haven’t taken advantage of the good years to enact reforms.

In 2014, China, India, Philippines and Bangladesh all make it into a ranking of the world’s five fastest-growing large (with GDP of US$300 billion or more) emerging markets. The Philippines is a success story in the region. Real GDP growth is expected to come in at 6.5% in 2014 – and this rate is expected to be maintained in the medium term. Growth will be driven by reconstruction following Typhoon Haiyan and consumer spending, driven in part by inflows of remittances. The Philippines has a successful Business Process Outsourcing (BPO) sector, which is also a key driver of economic growth – both directly and indirectly – with job creation in this sector boosting consumer expenditure. In the short-term, the country’s key challenges are external –the risk of a deeper slowdown in China and the global economy on the whole, and the impact of the Fed taper. In the longer term unemployment is a key challenge for the economy – the unemployment rate is expected to remain above 7% in the medium to long term.

Bangladesh’s position in the ranking on the other hand is precarious. Yes the economy has benefitted from inflows of remittances, a strong performance in textile exports and government structural reforms; but there is also a high risk of an escalation in tensions between the government and the opposition following a disputed election which if not resolved could severely hamper the country’s growth prospects. 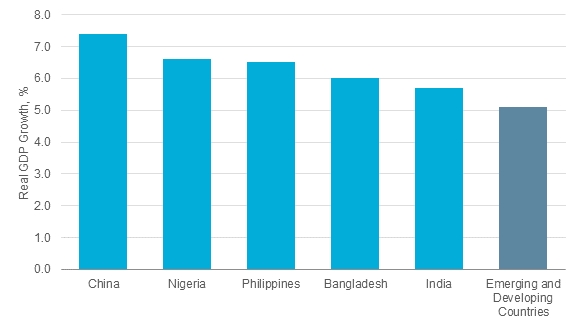 India (despite its relatively fast growth outlook for 2014) and Indonesia are numbered among the “fragile 5” economies. That is those economies deemed most in danger from the fed taper. Despite its projected rate of growth in 2014, the risks to India’s economy are on the downside - it has twin deficits – fiscal and current account – although it has managed an impressive reduction in its current account deficit. It is reliant on inflows of capital which can easily be reversed should investor sentiment wane, and inflation is high. Much also rests on the May general election – the return of a government with a strong mandate would hopefully reinvigorate structural reform of the economy.

In 2013 Indonesia was one of the countries most affected by talk of the fed taper. Again Indonesia suffers from twin deficits and a reliance on foreign capital. Yet the economy saw strong growth in the final quarter of 2013, boosted by exports – although it may prove that this growth will not be sustained in Q1 2014. Indonesia reacted to last year’s turmoil by raising interest rates and allowing the currency to depreciate and so is in a stronger position this year, but real GDP growth for the year as whole is likely to come in at a lower-than-trend rate of 5.5%.

Mongolia and Myanmar are two smaller economies in the region which have experienced impressive growth in recent years and are expected to do so once again in 2014 and into the medium term. In fact, both economies will double in size between 2013 and 2024. The speed of growth is impressive, but much of their potential still remains uncovered.

Mongolia’s economy is being driven by the mining sector – particularly mining of copper, zinc and coal. The economy will therefore need to diversify in the medium-to-long term. Particularly as 90% of exports are destined for China – leaving the country under pressure from external shocks. Nevertheless poverty has been reduced substantially and revenue from its abundant natural resources give the government opportunity to strengthen gains made so far.

Myanmar is in a similar position in that strong economic growth has been driven by commodities –specifically gas. Once again, this is compounded by a reliance on a few key trade partners – 70% of exports are destined for Thailand, China and India. Much is made of Myanmar’s strategic location between China and India, and this certainly does help, but Myanmar is still a country where only 1.3% of the population use the internet and where per capita consumer expenditure was US$675 in 2013. 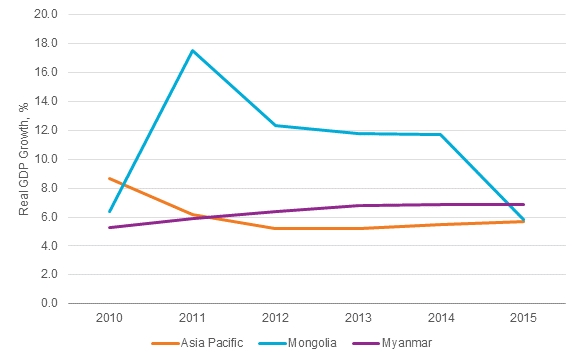 The next 10 years look likely to see the strong growth story continue. In 2024, Asia Pacific is expected to have a population over 4.3 billion, half of whom will live in urban areas. Its economic growth should continue to outpace that of other regions, and China will be the world’s largest economy. Consumer expenditure should top US$4,000 per capita (in 2013 prices).