The year began with a host of bad economic news with emerging markets in particular in the firing line. The global economy faces mounting risks this year: the China slowdown, as well as those of other large emerging markets such as Russia and Brazil; and instability in the Middle East will continue to cloud the horizon.

Here are some of the quarter’s most read content on Passport Economies:

Hard landing or no hard landing – this question has been bothering the analysts in the last months, with experts taking opposing views, further blurring the future perspective and refreshing the still vivid memories of 2008. Due to this increasing uncertainty, further decline in oil prices, recent stock markets’ swings, worse than expected data from Brazil and Russia, we have revised our global GDP growth projection for 2016 to 3.2 % (from 3.3 % in November).

Euromonitor International’s Economies team has identified key themes that will dominate the world economic and business landscape in 2016. All-in-all, 2016 is set to be another year where the global economy strengthens moderately but where downside risks, including the China slowdown, a decline in global trade and the impact of tighter monetary policy in the USA on emerging markets, remain elevated. A key word for the year will be “divergence” with the lack of strong, broad-based global growth across markets clearly evident. This report highlights key economic shifts, business dynamics and production trends across developed and emerging markets. 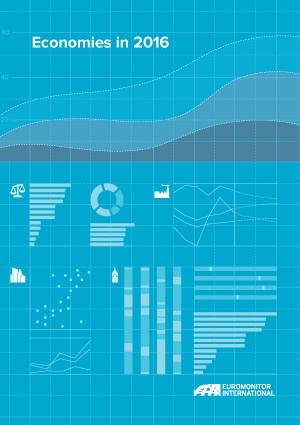 China’s economy is still expected to grow at an annual rate of 6.1% over the next five years, undershooting the government’s 6.5% target. This assumes a reasonably smooth downscaling of excess capacity in manufacturing, and a successful reallocation of production resources to the consumer goods and services sectors. According to official statistics, this rebalancing is progressing well, with services now accounting for more than half of China’s economy. The government has also signalled that it will start seriously tackling the problem of unprofitable state-owned industrial entreprises in 2016. For example, it plans to cut steel production by 40%. While this and similar plans will lead to significant lay-offs, the economy should ultimately benefit from greater resources available for the more productive private sector. 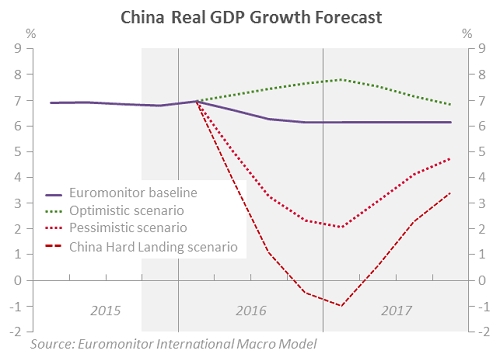 EMEs will see major challenges in 2016, as commodity prices remain weak and China’s slowdown endures. Also, financial conditions will tighten on the back of a stronger dollar and interest rate lift-off in the USA. India will continue to be a bright spot among EMEs, while economic contraction is forecast to prolong in Brazil and Russia. Despite some rising risks, EMEs still present long-term potential given their favourable demographics, expanding middle class and fast-growing consumer markets. 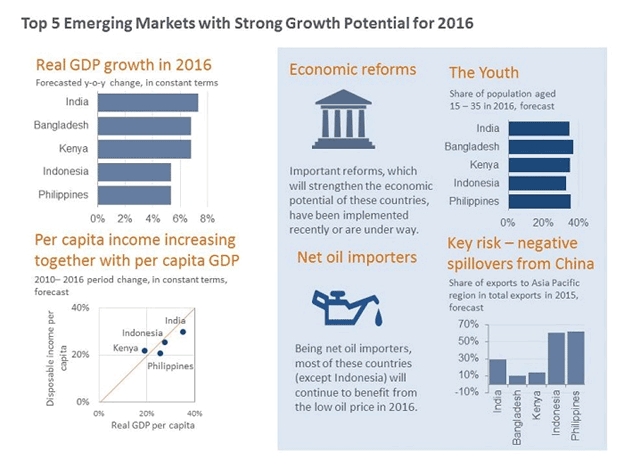 Euromonitor International has identified the top 5 emerging markets with the strongest growthpotential in 2016: India, Bangladesh, Kenya, Indonesia and the Philippines. While the general outlook for emerging markets in 2016 is far from bright, we tried to spot the ones among them, which have the strongest potential for growth despite the unfavourable global environment. These countries have the benefit of young populations, but so do many emerging markets, and this factor alone is not sufficient to ensure growth. Importantly, the selected countries are on the path of significant economic reforms, dealing with structural problems and improving their business environment. Most of these countries also are winning rather than losing in times of low oil prices. The major risk for them in 2016 is negative spillover effects of slowing Chinese demand across the Asia Pacific region.