Against a backdrop of globalisation, rising populism, political and geographic instability and changing consumer preferences, using the latest data for 2017, Euromonitor International can reveal whether the industry has reached a new normal and what lies ahead for luxury markets on a global scale.

According to our latest data, the total global luxury goods industry, including luxury cars and luxury hotels, looks set to continue to expand in 2017, with a healthy headline growth of 4% in real terms. However, as tough global trading environments continue to prevail, the market and key luxury players face mounting risks in 2018.

Indeed, pricing pressure owing to fluctuating exchange rates and currency volatility looks set to remain in the near future and there are major uncertainties buffeting the world economy and luxury sales, namely the rocky Trump administration, Brexit, as well as the flaring up of regional tensions across the world, with a stand-off looming with North Korea and Japan, and the US.

Swings and roundabouts for regional performance

In terms of regional performance, our latest data reveals some significant differences:

At first glance, Asia Pacific appears strong, with close to 9% growth in 2017. This is a marked difference on its performance just two year ago, when regional growth for 2015 of just 4% was seen, reflecting the significant economic slowdown in China. However, much of Asia Pacific’s growth for 2017 is indeed on the back of growth in mainland China thanks to its strong rebound in domestic private consumption.

The Americas continue to underperform, with the outlook looking increasingly uncertain. The US in particular is facing uncertainty, thanks to its strong dollar, political instability and cull on travel flows. For this first time since the 2007-2008 economic downturn, sales of luxury goods in the US look set to witness a decline of 4% in 2017.

At the same time, the weak Eurozone continues to hold back Western Europe’s regional performance. The added concerns over terrorist attacks, especially in cities like Paris and London, are also dampening sales. Indeed, for the second consecutive year, France is expected to witness a decline in its personal luxury goods sales in 2017.

However, the disappointing results for developed regions should not obscure the importance of these high-value luxury goods markets. These regions remain amongst the most powerful in the world and together account for well over half of all luxury goods sales in 2017. 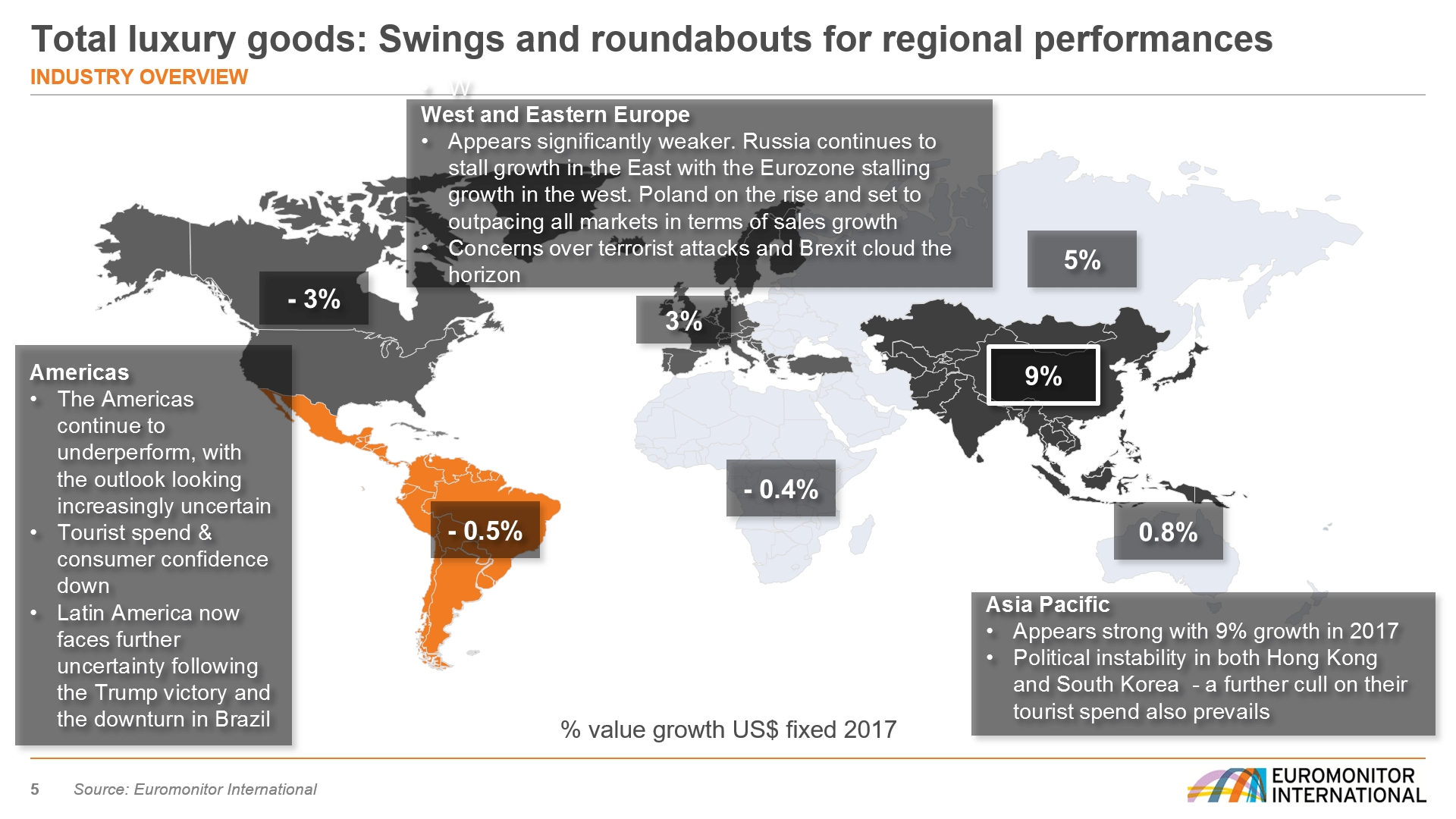 China’s luxury goods market is expected to increase by 12% in real terms in 2017, clearly cementing its position as the largest luxury goods market globally. Thanks to cooling economic growth, the government clampdown on luxury gifting, a depreciating currency and a volatile stock market, combined with Chinese consumers revaluating their purchasing priorities, China’s luxury goods market saw its years of double-digit growth come to an end in 2012. Nevertheless, demand remains strong amongst its expanding middle-class consumers and thanks to more favourable local price adjustments, as well as fluctuating exchange rates, more Chinese shoppers are choosing to shop for luxury at home as opposed to abroad, which is driving the domestic market. Moving forward, its total spending on luxury goods is expected to increase by a further 63% in the five years to 2022, at a real CAGR of 10%.

There are clear pockets of growth in China, with some categories, such as luxury cars, performing above average. Indeed, China’s sales of luxury cars increased by 16% in 2017, with an 82% rise in value sales expected over the 2012-2022 time series. Sales of its experiential luxury goods are also performing well, with fine wines/Champagne and spirits up by 9% on 2016 and luxury beauty up by 13% for the same year. In stark contrast, however, sales of its aggregated personal luxury goods categories (including luxury leather goods, designer apparel and footwear, luxury timepieces and luxury jewellery) are expected to increase by just 3% in 2017. Once again, this highlights the changes in the essence of luxury and a clear shift in consumer preference and focus from the physical to the experiential luxury.

Almost 18 months have passed since Britain voted to leave the EU. Yet, the uncertainty surrounding Brexit and what will happen to the UK luxury goods market is still endemic and will remain so for the foreseeable future. However, in a surprising turn of events, the UK luxury goods market recorded 9% growth in 2016 and is expected to see a 7% rise in 2017 (in real terms). Much of this growth is on the back of wealthy tourists taking advantage of the weak pound sterling and favourable exchange rates, but similarly it is also owing to domestic shoppers refraining from shopping abroad thanks to unfavourable exchange rates. Sales of luxury leather goods (such as luxury bags and wallets) and luxury timepieces are particularly strong from international tourists, with both categories witnessing double-digit spending growth in international spend over the 2016-2017 time period.

At a time when the political world is in turmoil and populism is on the rise, luxury is becoming less about showing off wealth and more about what we find meaningful. Luxury consumers the world over are increasingly looking for the rare, unique and unexpected, with sustainability also playing an increasingly important role in purchasing decisions.

Indeed, political turmoil aside, 2017 has brought further dramatic changes in the global consumer landscape, as consumers have reassessed their priorities and increasingly asked themselves what they truly value in luxury goods. Preferences are shifting from ownership and acquiring new things to acquiring more meaningful experiences and from high quantity to high quality and overall value. This is having a significant impact on the way luxury brands and retailers do business, with existing companies adapting their strategies to stay ahead of the consumer.

Similarly we are seeing a clear shift in consumer attitudes towards “sustainable luxury”, which is opening up a range of growth opportunities for luxury brands, services and retailers. A host of technological, environmental and economic changes are driving demand for more conscious consumption of luxury goods, with an increasing number of leading luxury players now incorporating sustainable practices into their business model.

Indeed, global wealth expansion is going much further than just personal luxury goods, with areas such as luxury cars and luxury hotels (5-star plus) clearly benefiting. Stronger global demand for luxury experiences is encouraging leading fashion houses to build bigger footprints in areas such as hotels, coffee shops, restaurants and bars. This is a type of luxury lifestyle branding that many players will look to build on over the year ahead. 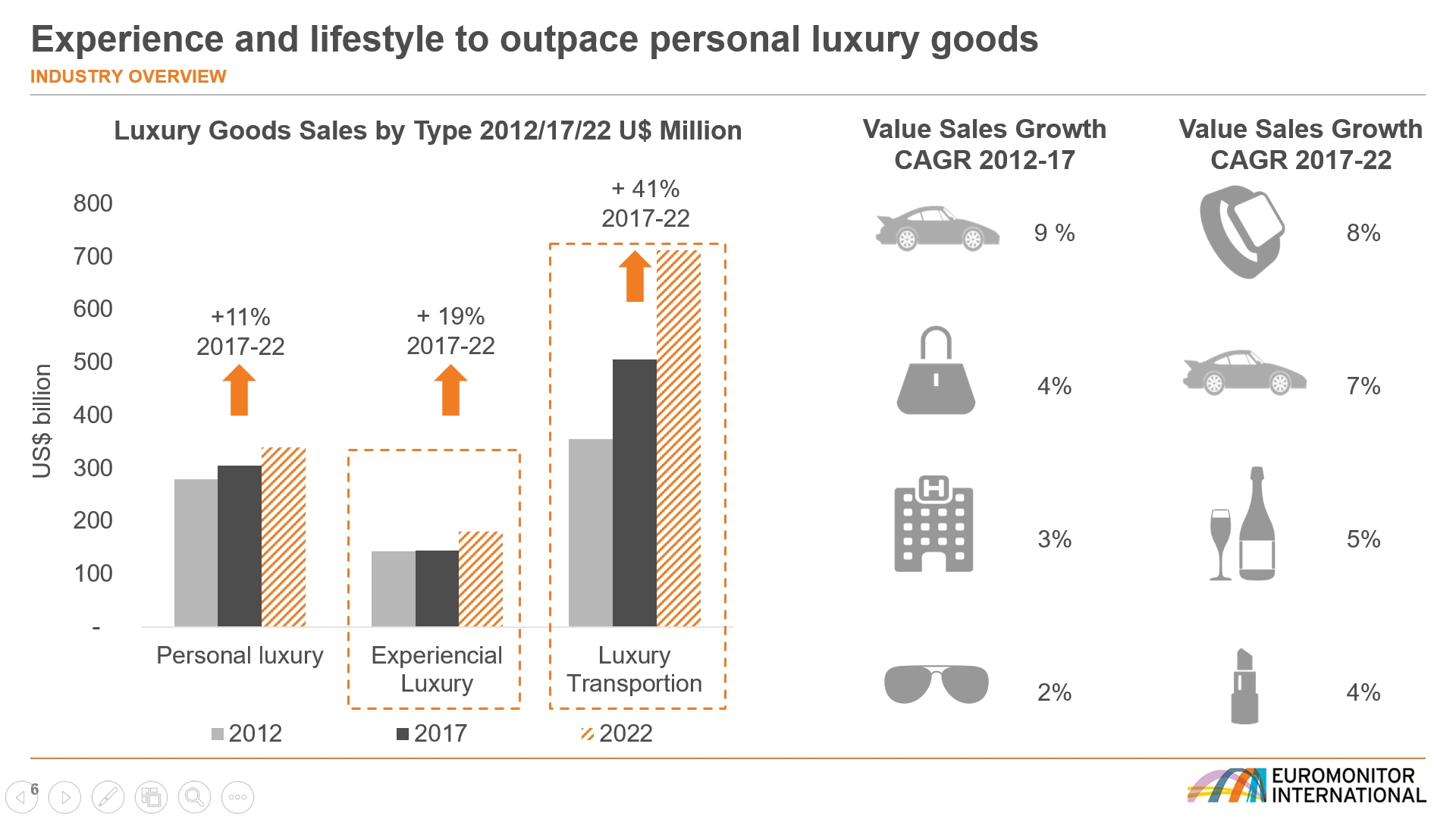 The outlook for global luxury goods market in 2018

Growth is going to be harder to find in the coming years in both developed and emerging markets. Volatility and corruption as well as the risk of a trade war with the US could create stresses in the global economy.

Nevertheless, overall forecast growth rates remain healthy for 2018 (5% in real terms), although performance will vary substantially across different regions, countries and categories. Luxury cars, fine wine/Champagne and spirits and luxury hotels yet again are forecast to provide a much needed boost to global luxury sales. There will also be a myriad of other opportunities to tap into for luxury brands: upstream technology and digital innovation; improving green credentials and sustainability practices, as well as shopping cycles to meet consumers’ need for instant gratification; or redesigning the future of bricks and mortar stores to name but a few.