On the other hand, this market still remains relatively small, accounting for only 4% of global volume market size in 2015. However, currently ranked sixth out of seven regions worldwide in total volume terms, in 2020 it will be ranked fourth, based on Euromonitor International forecast data.

Cider in Eastern Europe increased by a 23% total volume CAGR in the 2010-2015 period, which was the second fastest rate across the regions worldwide, behind only North America (39% total volume CAGR in 2010-2015). In 2015, the Eastern European market was still led by the Baltic States, which accounted for 26% of total volume sales, followed by Poland with 22% and Ukraine with 15%. However, while the Baltics lost eight percentage points of share last year, Poland was able to gain by the same figure, increasing from 14% in 2014 to 22% in 2015. 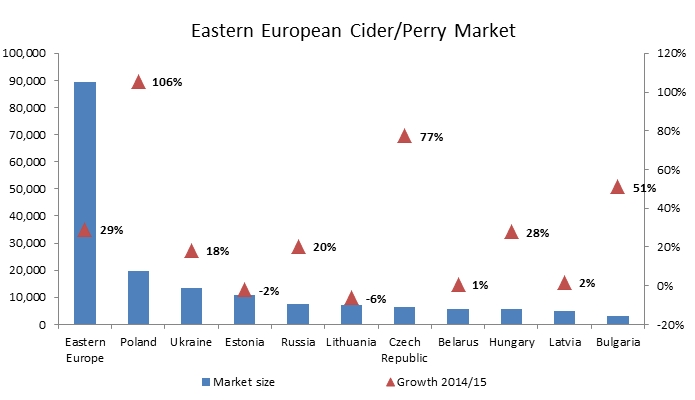 The Eastern European cider/perry market basically emerged in the Baltic States and, until 2009, the Baltics were accounting for 98-100% of total Eastern European volume sales. The Baltic States are distinguished by a prevalence of sweet ciders, which are different from the traditional dry ciders that are popular in the UK, Ireland or France. In 2015, the top three ranked ciders at overall Eastern European level were Somersby, Fizz and Cydr Lubelski, which are considered as sweet ciders rather than dry ciders. However, growing appreciation of dry ciders is being observed in Eastern Europe. This trend is being supported by increasing shares for such flagship multinational brands as Strongbow, perceived among consumers as dry ciders. At the overall Eastern European level, Strongbow increased its ranking from 12th in 2012 to fourth in 2015.

“That which does not kill us makes us stronger”

In 2012, the Polish cider market was negligible, but, by 2015, it was ranked first in the overall Eastern European region. The success of the product can be attributed to several circumstances: a record apple harvest, decreasing excise duties (since 1 January 2013), and a Russian ban on Polish apple imports in 2014. The record harvest of apples in Poland, the export ban to Russia (largest Polish export market for fresh apples) and decreasing excise duties provided Polish producers with a strong impetus to engage in cider/perry production. The Russian ban on importing Polish apples, which was meant to weaken the Polish economy, pushed the industry into thinking in a more innovative direction. All the above-mentioned factors, in line with an increase in promotional activity, led to rapidly growing consumer interest in a relatively novel product for the Polish market, eventually driving it into the leading position across Eastern Europe as a whole. 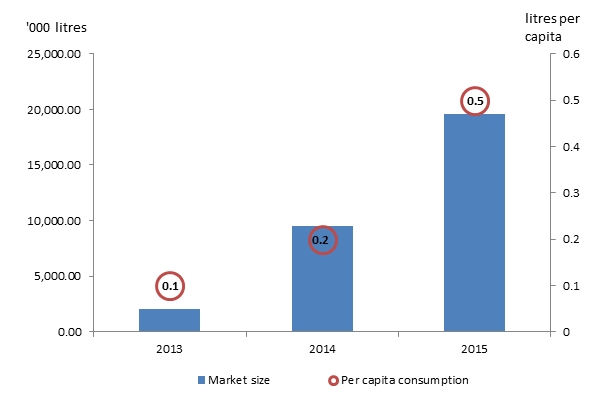 Crisis is not yet an obstacle for growth

In 2015, cider/perry was the only growing category in both Russia and Ukraine, which were both undergoing a severe economic crisis, while alternative alcoholic drinks, such as beer, RTDs/high-strength premixes, spirits and wine, were declining. Growth in these markets was sustained at a positive level mainly by the fact that the category is developing from a low base. In addition, both markets saw the introduction of the Somersby cider brand during the 2011-2014 period, which was accompanied by strong marketing support, helping to provide better understanding of the product.

Another important factor affecting the healthy cider/perry growth in both Russia and Ukraine is the fact that consumers perceive this drink as being a healthier alternative to RTDs/high-strength premixes. While both countries have relatively high per capita consumption levels of RTDs/high-strength premixes (higher than the Eastern European average), these drinks are increasingly considered as unhealthy, not only because they contain alcohol, but also because they contain many artificial ingredients. In light of this, cider/perry, with its natural juice fermentation, is perceived as being a less harmful alcoholic drink. Finally, the carbonated nature of the drink as well as its strength (referring to ABV) makes cider/perry similar to beer, and at the same time different to wine. Therefore, despite its novelty, cider/perry became a very attractive alternative for the female target audience that is searching for an alternative to beer, wine or RTDs/high-strength premixes in terms of both taste as well as ABV level.

Westernised levels of consumption in the Baltics

Despite experiencing a decreasing share in the total Eastern European cider/perry market, the Baltic States were able to sustain their leadership. However, the cider/perry market in the Baltics States has reached saturation levels, as shown by the fact that in 2015 only Latvia recorded positive growth, while both Lithuania and Estonia were declining in terms of volume sales. The Baltic States have a long-lasting tradition of cider consumption, with this product present on store shelves for more than a decade. In fact, per capita consumption in Lithuania and Latvia in 2015 was 2.4 and 2.5 litres per capita, respectively, which is closer to the Western European average of 2.6 litres, than the 0.3 litres seen in Eastern Europe. What is even more interesting is the fact that consumption in Estonia is more than three times higher than in Latvia and Lithuania, reaching 8.5 litres per capita in 2015. Taking into account the fact that consumer behaviour in all three countries is not that different, such figures seem anomalous at first glance. However, neighbouring Finland provides the answer – the monopolistic nature of the local market makes alcoholic drinks in Finland very expensive, therefore Finnish consumers take advantage of lower prices of cider/perry (as well as alcoholic drinks in general) in neighbouring Estonia by buying a lot of alcohol there during tourist trips, thus increasing per capita sales in Estonia to abnormal levels compared to Lithuania and Latvia.

Multinationals act as a growth engine in Central European markets

Impressive development in these markets was also sustained by strong marketing campaigns from such players as Carlsberg A/S, Heineken NV, Molson Coors Brewing Co and SAB Miller Plc. Carlsberg A/S was a pioneer with its Somersby cider in the Bulgarian, Croatian and Hungarian markets. Back in 2012, Hungary saw the appearance of Heineken’s Strongbow brand, increasing competition for Somersby. In 2015, Strongbow entered the rest of the above-mentioned markets. The third multinational player was Molson Coors Brewing Co with its Carling brand, which appeared in the Czech Republic in 2013, followed by Bulgaria and Hungary in 2014, and Croatia in 2015. In the Czech Republic SAB Miller Plc launched Kingswood cider in 2013, which was ranked first after only one year, and in 2015 it entered the Slovak market, becoming the number two cider brand on the Slovak market by the end of the year. Another factor highlighting the growing importance of cider in Central European markets is the fact that Heineken NV has chosen its Bulgarian Zagorka brewery as a regional centre for the bottling and export of cider to the Balkans.

Taking into account that cider/perry remains underdeveloped in the majority of Eastern European markets, low base development distinguished by strong growth will be the main factor shaping future dynamics. In addition to that, cider/perry will enjoy a trend of growing appreciation as a lighter alcoholic drink, attracting consumers looking for an alternative to traditional alcoholic beverages, but with lower alcohol content. Continuing rapid growth of the cider/perry market in the majority of Eastern European markets, in line with beer market stagnation, is likely to attract new players, enhancing the development of cider/perry in the region to an even greater extent. Keeping in mind the fact that the nature of the cider/perry production process has similarities with beer brewing, it is likely that potential entrants will be beer breweries that are not yet already engaged in cider/perry production, but have enough production capacity as well as the technological know-how to enter the market. In light of this we might expect new well-known brands to appear from the big multinationals operating in the region, as well as new brands from local players.

One more potential trend in cider/perry that might develop in the coming years in Eastern European markets is growing popularity of craft ciders. In light of the popular craft beer trend worldwide (and Eastern Europe is no exception), we might observe growing interest in and appreciation of craft/artisanal cider among sophisticated consumers, leading to increasing volumes of home-made ciders as well as emerging microbreweries engaged in craft cider production for both aficionados and curious consumers looking for something special, novel and different.

It is also expected that in the coming years we will observe growing appreciation of “classic” dry ciders as an alternative to the currently more popular sweet ciders in Eastern European markets. In line with a continuously growing cider/perry market in Eastern Europe, consumers will also become more sophisticated and educated in terms of cider varieties, looking for something traditional from cider culture. A growing share of the globally popular dry cider brand Strongbow has already provided impetus for popularisation of dry cider across Eastern European markets, which will continue to gain ground in the coming years.

Finally, it is also worth noting that, according to the latest industry forecast model, even in the light of the healthy development seen in the review period and expected in the coming years, Eastern European cider/perry markets still have unmet potential[1] that might yet to be revealed.

Restarting Europe: Exploring New Trends in the Evolution of the Physical Store

Digital Brand Activation in Snacks: Leveraging the Influencing Power of Consumer through “Hometainment”