As eyewear has traditionally been perceived as a medical device, sales have long been in the control of eye care practitioners (ECPs). Thus, manufacturers have prioritised building strong relationships with ECPs to push sales of their brands. However, in recent years, heightened competition and the repositioning of eyewear products have made branding to consumers more important than ever. In the first of a 2-part series, the significance of branding to various eyewear manufacturers is explored. The second instalment of this series will focus on a similar theme regarding branding, but from the perspective of eyewear retailers.

Eyewear is moving towards mass consumerism as products are increasingly marketed as fashion and lifestyle products. The growing emphasis on building brand awareness is clearly seen in the kinds of product innovations brought to market. Eyewear manufacturer and retailers are introducing functional spectacles that can be worn for all kinds of novel uses other than for vision correction.

JINS, a major eyewear manufacturer and retailer in Japan, has launched several types of novel spectacles in the past few years. The JINS PC glasses for computer use, JINS Kafun Cut glasses for hay fever protection, JINS Moisture glasses for dry eyes, and JINS MEME smart glasses which track eye movement to identify a person’s fatigue level for better work management. Not all of these functional glasses are the most practical, but, on the whole, they have had considerable success in strengthening JINS’s positioning amongst consumers and international media. In addition, JINS has also created new usage occasions and expanded its target audience with a wide range of functional glasses for repeat and frequent purchases. Anchored by an innovative product portfolio, JINS’s brand image is one that is perceived as exciting, a critical factor that entices consumers into typical retail stores. 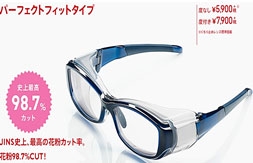 Brand equity is increasingly important and is starting to drive more ambitious projects in eyewear. Globally, numerous eyewear manufacturers have plans to launch smart glasses of their own, despite Google Glass not having received a warm welcome from the public. A good analogy to understand their motivations requires one to look no further than the Space Race. Various nations have strived to exhibit spaceflight supremacy, whereas eyewear players like Luxottica and Novartis (Alcon) are engaged in a similar race as an assertion of power and strength.

Greater focus on branding is not limited to just the mass players. In order to stand out from competition, luxury eyewear players are also re-looking their strategies in this marketing aspect. Branding is more important than ever, now that eyewear is marketed as a lifestyle product and part of the luxury/premium collections of various fashion houses. In what is seen as a paradigm shift away from ECPs, Kering for example, has formed a dedicated eyewear division in late 2014, on the back of announcements that it plans to buy back the eyewear licences for its Gucci and Stella McCartney brands from licensees Safilo and Luxottica respectively. Kering is expected to work closely with its own retail partners to better position its eyewear as luxury/premium fashion brands. The move is also seen as Kering’s assumption of tighter control over its brands.

When comparing across eyewear markets globally, Singapore is one of the few Asia Pacific countries ranked highly in terms of average unit price of spectacle frames. It is a good example of a market which has become more sophisticated due to branding efforts, education and consumer awareness and sophistication.

In Singapore, eyewear manufacturers work closely with ECPs and eyewear retailers. Through various initiatives such as point-of-sale displays and store-in-store retail concepts, to be elaborated in a subsequent opinion piece, eyewear players have raised consumers’ awareness of the importance of eye care. Consequently, consumers in Singapore generally have a higher willingness-to-pay for quality eyewear. In addition, optical goods stores have maintained the lion’s share of Singapore’s eyewear market (accounting for 90% of total value sales on average during the past five years), due to the value-added services they provide to consumers. The graph below compares the performance of optical goods stores in Singapore relative to markets with similar-sized populations. 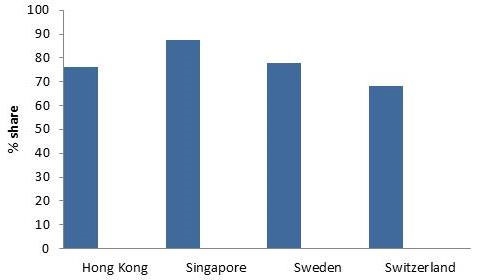 The various illustrations above clearly demonstrate the importance of branding for many eyewear players, especially as competition within the industry is stiffening. Without a clear and differentiated value proposition, communicated to consumers through clear branding, optical goods stores will struggle to retain their customers as well as margins. In addition, it is important to recognise that the consumer has become a pivotal decision maker as eyewear is marketed as a fashion product. Thus, branding efforts should involve both the consumer and ECPs.

In a follow-up opinion, a closer look at what branding means to various eyewear retailers will be taken, alongside the potential pay-offs of having strong brand equity.