In the online travel agency sector, which is seeing steady growth but also increasing competition, some regional players with ambitious expansion plans are emerging in Europe and Asia.

The Bravofly Rumbo Group has, in the last three years, turned from a national into a leading regional player in the OTA sector in Europe. Its recent acquisition of Lastminute.com, a popular OTA brand in Europe, gives the company the opportunity to expand its sales from online air bookings to the more profitable online hotel bookings. To continue to grow, however, the Bravofly Rumbo Group will need to be able to compete successfully with the two global giants in this sector, Expedia and Priceline, which have been constantly growing over the past 10 years at the expense of other travel intermediaries, but also of direct bookings, through being at the forefront of technological innovation.

The rise of regional players in Europe

The last few years have seen the rise of some regional OTA players in Europe, specialising in particular in online air bookings, a less profitable sector compared to online hotel bookings, due to low margins. In particular, the eDreams Odigeo Group, formed in 2011, is today the largest group based in Europe in the OTA sector, and the fourth globally. It had gross bookings of over US$6 billion in 2014, generated by its eDreams, Opodo, GoVoyages and Travellink brands.

The Bravofly Rumbo Group has also grown significantly over the past 10 years, becoming a leading regional player in Europe. Based in Switzerland, the Bravofly Rumbo Group initially recorded strong growth in Italy, to become one of the leading OTAs in the country, thanks to the Volagratis brand, specialising in online air bookings. In 2012, the company doubled its sales thanks to the acquisition of the leading Spanish OTA Rumbo, also specialising in online air bookings, which was followed in 2013 by the acquisition of the French metasearch engine Jetcost. 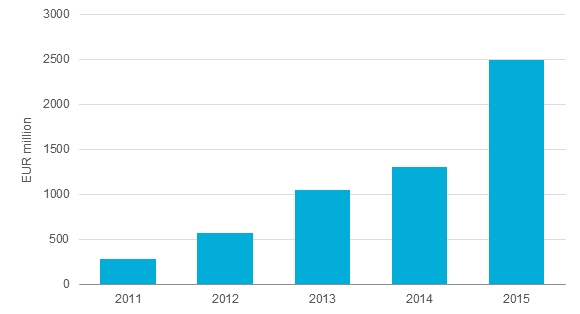 However, it was the acquisition of the historic European OTA Lastminute.com in February 2015, for US$ 120 million, that marked a defining point in Bravofly Rumbo Group’s expansion, as it allowed the company to gain a significant position also in the more profitable online hotel bookings sector.

Lastminute.com enjoys high brand awareness in key European markets such as the UK, France, Germany, Spain and Italy. Moreover, it has a balanced 50/50 breakdown of revenues from flights and non-flights products compared with an 82/18 breakdown for the other brands of the Bravofly Rumbo Group. The dominance of flight bookings had been a limiting factor for the company in terms of revenues and earnings, due to the low margins offered by this category.

According to Fabio Cannavale, founder and chairman of the Bravofly Rumbo Group, the company aims to implement the integration of all its brands in a unique technological platform during 2015. Lastminute.com will be the key pan-European brand for the group, in which significant offline promotional investment will be made from the summer of 2015 onwards, while the strong national brands Volagratis in Italy and Rumbo in Spain will be retained.

Acquisitions are expected to continue, due to the company recognising the importance of scale in a sector which is steadily consolidating. Acquisitions are also going to focus on mobile technology, such as the Map2app start-up, acquired in February 2015. Mobile is a key area of development identified by the company, which aims at the development of a unique app able to follow travellers throughout their journey. The final aim, according to Cannavale, is to become a leading “smart travel provider” in its European core markets, while the financial objective is to reach gross bookings of €5 billion and revenues of €600 million by 2020.

The next few years will tell if this new regional player will manage to compete successfully in terms of technological innovation, consumer intelligence and ultimately bookings, revenues and profits with the global OTA giants Priceline and Expedia, which currently dominate the sector.