Brazil accounts for one third of both Latin American GDP and population, but the performance of the region’s largest economy has been dismal so far this year. Although contagion to the smaller economies in the region will be – on the whole - limited, the impact on business will not.

Staring economic catastrophe in the face

Brazil’s situation is one of its own making.  Consumption-led growth has run its course and real GDP growth averaged just 1.6% between 2011 and 2014. The current slowdown is not just a cyclical glitch, the economy is in dire need of serious reform for sustainable growth to be achieved but the political appetite for this has been lacking. As a result, Brazil is staring economic catastrophe in the face. Growth is stagnating, inflation climbing, the currency weak and government finances strained. This is coinciding with a political scandal involving the president and the state-owned energy company Petrobras.

Regional spillovers from Brazil’s slowdown are relatively limited. One reason is that trade linkages are perhaps surprisingly weak – in other words only a small proportion of Brazil’s imports originate from Latin America - 16.4% in 2014. In fact, almost one third of imports come from the USA and China.

Our macro model shows that the three most-affected countries from a Brazilian slowdown would be Argentina, Chile and Peru. Brazil was the destination of 20.8% of Argentina’s exports in 2014 and a two percentage point slowdown in Real GDP growth in Brazil from Q2 2015 would shave 0.40 percentage points off growth in Argentina in 2015 and 0.17 percentage points in 2016. Argentina’s weak economic fundamentals do not help, nor does the composition of its exports to Brazil, which lean towards consumer goods.

Chile and Peru, with their stronger fundamentals and different export composition are less affected. Growth in Chile would be revised down by 0.16 percentage points and growth in Peru by 0.11 percentage points in 2015.

Countries Most Affected by a Brazilian Slowdown

More importantly, Brazil is a key market for consumer goods companies. Home to nearly one third of the region’s population, Brazil accounted for 53.3% of value sales of beauty and personal care in Latin America in 2014, 40.7% of consumer appliance sales and 37.7% of packaged food sales. With consumer expenditure currently set to increase by just 0.6% in 2015 and with spending on durable goods forecast to actually decline by 1.1%, business will have its work cut out to part Brazilians from their money in 2015. 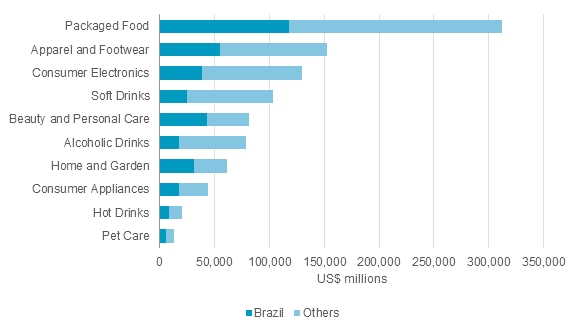 The rise of its middle class has been a key engine of Brazilian growth, and is the main target of multinationals. Between 2000 and 2014 the number of households earning more than US$25,000 (in 2014 prices) increased by 117%. 27.4 million entered the labour force, and consumer lending expanded by 546% in real terms. As a result it’s no surprise that Brazil’s economic deterioration will be closely watched in board rooms around the world.

A region at risk of economic stagnation

Brazil is by no means alone in its troubles; the region’s third and fourth largest economies Argentina and Venezuela are also (to put it mildly) in the economic doldrums. With GDP growth forecast to contract in 2015, both countries face numerous and substantial challenges. Mexico, the region’s second-largest economy, is performing better, but even here prospects are dimmed by the oil price, which is putting pressure on government finances.

We’re currently forecasting growth of just 1.9% in 2015 for Latin America as a whole, and when adjusted for population growth, this figure is even more desultory – 0.9% in per capita terms.  With three of the region’s four largest economies at best struggling this year, and at worst mired in recession, 2015 looks set to be a watershed for Latin America’s economic prospects, for all the wrong reasons.

Learn more in the white paper "From the Bottom of the Pyramid to Emerging Middle Classes in Latin America" written by Sarah Boumphrey.

Global Recovery Tracker: Momentum of the Recovery Likely to Have Peaked

Global Overview of the Machinery Industry

The briefing examines how the machinery industry is performing globally and in the largest countries in terms of machinery output. The report also provides data…