Following the UK’s referendum result in June 2016 to leave the European Union (EU), pro-longed uncertainty is the number one factor dominating the country’s business climate, given the different Brexit scenarios on the table and the length of time it will take to put the exit into place. If the UK can overcome the immediate shock and secure the passporting rights of financial institutions, it can leverage its well established business infrastructure to continue to attract investors. However, challenges remain and Germany is likely to be a strong competitor in the longer term.

The UK has a favourable business climate and its well-structured financial system is one of its key strengths, but this is at risk in the Brexiting process:

Germany set to become a major competitor in the long run

One of the key arguments in favour of Brexit was to open doors to the rest of the world for trade and commerce. The key question is how well-placed is the UK to attract business in the post-EU period? The UK needs to be wary of competition from its peers, such as the USA and especially Germany and France, both of which are EU members, giving investors access to the largest trading bloc in the world: 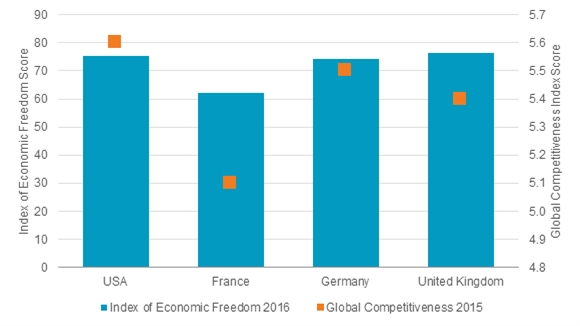 Note: Ranking out of 140 countries for the Global Competitiveness Index and 186 for the Index of Economic Freedom. The higher the score, the stronger the country’s position in the given indicator, placing it higher up in the ranking order. 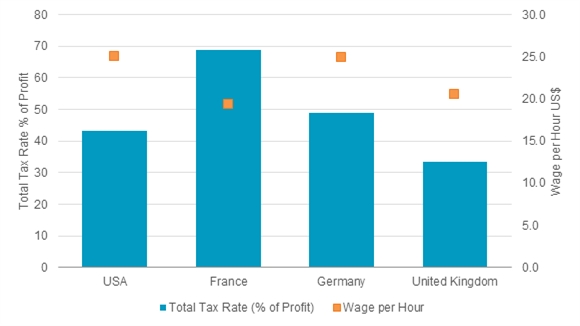 Key considerations for the long run

There are many interlinked variables, which make it difficult to ascertain whether the UK will continue to remain an attractive investment zone. The future of the UK economy is highly uncertain and the process of a Brexit can only take place once Article 50 has been triggered and will likely last two years. No initial changes are expected in the way people travel, goods move and services are sold until deals are finalised in the next two years. Meanwhile the key considerations are: