Researchers at MIT have created an incandescent lamp that comes close to matching CFLs and LEDs in terms of energy efficiency. Is a technology beloved by many about to make an unlikely comeback?

The pros and cons of incandescents

Despite the fact that they are being phased out, many consumers remain extremely fond of incandescent lamps, frequently citing the ‘warmth’ of the light they produce. This is because they emit all colours of light, whereas other light sources, such as compact fluorescent lamps (CFLs) and light-emitting diodes (LEDs), can muster no more than a subset of the visible spectrum. 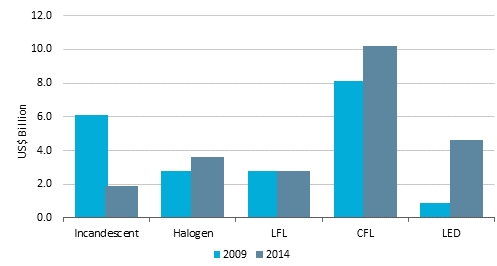 The principal weakness of the incandescent lamp (and the reason it is being phased out) is its high level of thermal emissions, making it extremely inefficient. It functions by heating a tungsten filament until it glows, but only a small proportion of the energy consumed in this process is emitted as visible light. Most of it is lost as infrared radiation. The luminous efficiency of an incandescent lamp is usually less than 3%, compared with between 5% and 10% for CFLs and up to 15% for the most efficient LEDs.

In a paper published online by the journal Nature Nanotechnology during January 2016, a team of researchers at the Massachusetts Institute of Technology (MIT) in the US “experimentally demonstrated a proof-of-principle incandescent emitter with efficiency approaching that of commercial CFL or LED bulbs, but with exceptional reproduction of colours and scalable power.”

They achieved this by surrounding an incandescent lamp’s tungsten filament with a “resonating nanostructure” – an extremely thin layer of material that allows visible wavelengths to pass through it but reflects infrared light back toward the filament to be reabsorbed. The filament consists of a ribbon of tungsten, rather than a strand, as this shape increases its ability to soak up the reflected heat. The prototype is 7% efficient, but the researchers theorise that with the right combination of materials, this figure could be pushed to 40%.

Between 2009 and 2014, global real value sales of light sources rose by 13%, to US$23 billion. Over the same period, value sales of incandescent lamps plunged by more than two thirds (68%), to US$2 billion, as countries around the world phased them out in an effort to reduce energy demand. As a result, sales of incandescents have been overtaken by those of halogen, linear fluorescent (LFL) and LED lamps, while compact fluorescent lamps (CLF) now dominate the market.

“The materials involved [oxides of silicon, aluminum, tantalum, and titanium] are cheap and abundant and the manufacturing process is scalable,” MIT researcher Ognjen Ilic told website IEEE Spectrum. Nonetheless, this breakthrough is unlikely to slow the sales decline of incandescents in the medium term. This is because the cost of producing nanomaterials remains extremely high, and until it declines significantly, any next-generation incandescent lamp would be prohibitively expensive.

This research could facilitate the resurrection of incandescents, but probably not for at least five, or more likely ten, years. As a result, CFLs and LEDs are likely to deepen their dominance of the light sources market in the coming years.

US Pet Care and the Future of Premiumisation

Domestic Hygiene Beyond the Pandemic in Developing/Emerging Markets

With health at the center of attention since the pandemic, interest in products that clean and disinfect has grown. Domestic hygiene has become an important…