Celebrities are playing an ever greater role in modern culture and consumption patterns, serving as arbiters of taste, style and public opinion the world over. Their endorsement and creative input enable them to bring attention, credibility and other intangible benefits to a brand in a way that no other type of advertising can. This new global report analyses the ways in which marketers are exploiting celebrity power to create an emotional bond with the consumer and further their sales potential. 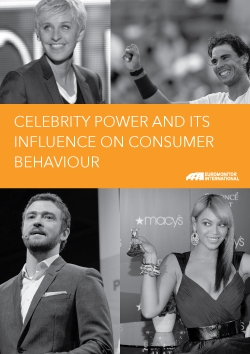 One of the most dramatic impacts of celebrity culture on consumer behaviour is the greater emphasis on personal appearance and self-image.

While some consumers may emulate the looks and style of their icons, others simply feel pressured to look more muscular or glamorous to fit with the idealised images of beauty with which they are bombarded each day.

The celebrity culture has also contributed to the age blurring phenomenon, whereby children are growing up more quickly and adults are trying their best to halt the ageing process in order to conform to the youthful images portrayed by celebrities and the media.

With growing interest by men in keeping their skin smooth and wrinkle-free, the once-niche men’s grooming segment has become a sizeable market. This is partly due to the popularity of reality TV series featuring buff, well-groomed men, such as the UK’s TOWIE.

The celebrity culture has also led to a booming market for cosmetic surgery, as the number of celebrities undergoing procedures has led to increased social acceptance of cosmetic surgery. What was once considered a social stigma has now become a status symbol.

In the UK, “teen toxing” is reported to be a new craze among image-conscious and celebrity-obsessed teenagers. The teenage market is said to be behind a 15% rise in demand for Botox injections in an £18 million-a-year market.

The huge publicity accorded to celebrity pregnancies and parents has also been a major driver in the market for pregnancy and baby products. Celebrity mums are among the largest headline grabbers, and their buying decisions often inspire mums-to-be.

The Duchess of Cambridge’s pregnancy provided a major boost to the global baby market, as the royal couple’s choices inspired parents-to-be all over the world. The birth added an estimated £243 million to UK retail sales of items such as baby clothes, cribs and toys in July/August 2013.

The trends have been identified by Euromonitor International’s Strategy Briefing team. Purchase the full report here.