The government has relaxed its budget deficit target for 2016 to 3% (from 2.3% in 2015), providing room for some fiscal stimulus. It has also promised to move forward with the restructuring of state-owned enterprises (SOE’s) and increasing private sector competition in key industries, but doubts about the execution of these reforms remain. 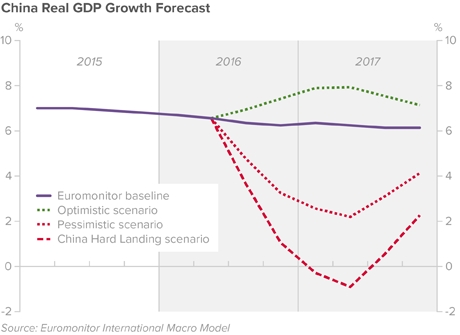 SOE restructuring plans appear to focus on mergers, increasing the efficiency of existing firms, and joint ventures with the private sector, without any actual privatisation or liquidation of unprofitable firms. The new 100 billion Yuan (around 15 billion USD) compensation fund for laid-off state workers is insufficient, unless the government significantly limits the scale of job losses. The continuing use of rigidly high targets for GDP growth and investment, as well as the money supply growth target of 13% for 2016, also cast doubt on the government’s willingness to accept the short-term pain caused by major economic reforms in exchange for more sustainable long-term growth.

Chinese official GDP year-on-year growth was 6.7% in the first quarter of 2016, slightly below the 6.8% growth in the fourth quarter of 2015. The economy stabilised, in part due to looser credit conditions. Rebalancing towards services continued. Services sector output increased by 7.6% year-on-year, while the secondary sector’s (manufacturing, mining and construction) growth was 5.8%. Services now officially account for 56.9% of GDP while the secondary sector’s contribution has declined to 37.5% of GDP. However, the speed of rebalancing seems suspiciously fast, considering that the services sector output was previously estimated at just 50% of GDP for all of 2015. Much of the increase in service sector output came from just two sectors: financial services and logistics and transportation. This casts further doubt on the robustness of the shift towards services. 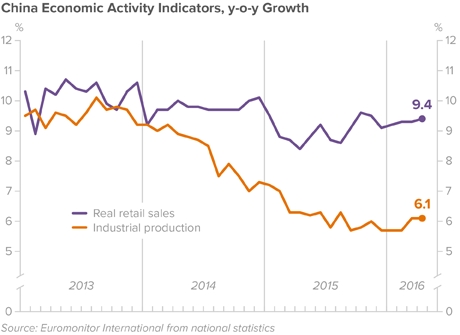 Industrial output growth in recent months was barely above 6%. Meanwhile retail sale volumes have continued growing by more than 9% year-on-year, consistent with the growing importance of household consumption in China's economy. However, the speed of increase in retail sales is also likely to be over-estimated, with Euromonitor International retail industry estimates suggesting growth closer to 8%. 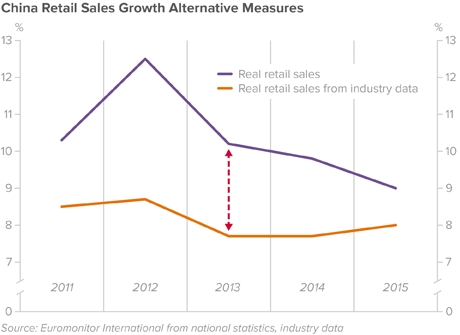 Confidence and other Leading Indicators

Chinese stock market prices have declined by almost 20% in 2016 (measured by the Shanghai stock market index, as of mid- May). Business confidence has declined and remains moderately below its long-term average. Purchasing manager surveys continued to signal worsening business conditions in the manufacturing sector, and small improvements in service sector business conditions during the first four months of 2016. Consumer confidence has increased slightly in recent months and is now close to its long-term average. 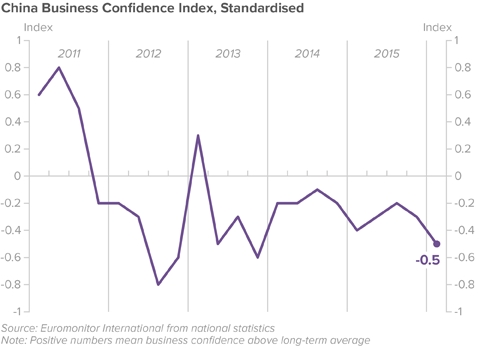 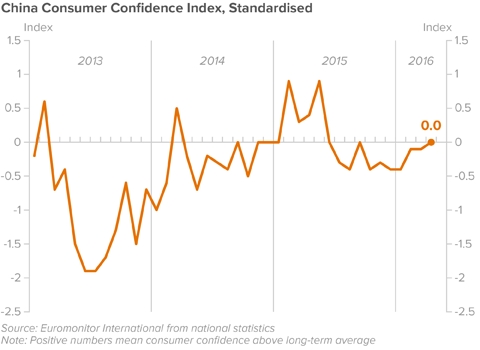 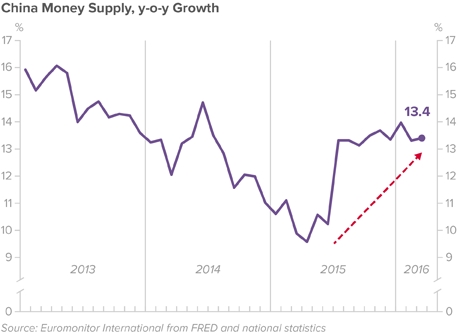 Credit has continued to increase faster than nominal GDP, with loans volume increasing by more than 14% and money supply growing by more than 13% year-on-year (as measured by M2) in the first four months of 2016. The private sector debt to GDP ratio already exceeded 200% in the second half of 2015 and is likely to approach 220% by the end of 2016. Adding in local government and SOE debt, debt to GDP could reach almost 300% by the end of 2016. One symptom of the continuing fast credit expansion is the recent boom in housing markets, with new home sales up 63.5% in April over the previous year.

There are some indications of a lending slowdown in April, but the Chinese economy still has a dangerously high level of debt. Interest payments are already absorbing around 50% of the operating profits of non-financial companies listed on the stock market, and the situation is likely to deteriorate as profits decline. The $3 trillion corporate bond markets have been subject to significant stress lately, making it harder for Chinese business to refinance its existing debt .The number of corporate bond downgrades and defaults has already started increasing, and new bond issues have declined by 11% year-on-year in April. As for the banking sector, while officially only 1.6% of loans are non-performing, by some estimates the true proportion is closer to 10-20%. 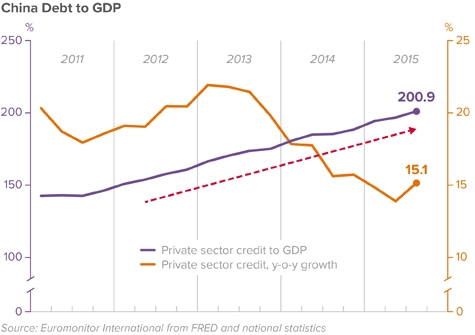