We have revised our GDP growth forecast for China upwards to 6.7% in 2016 (from 6.4% in our August forecast). Several economic activity indicators, such as purchasing manager surveys and business profits, turned out better than expected earlier. Trump’s victory in the presidential election and the resulting global uncertainty shock has caused us to maintain the 2017 forecast almost unchanged at 6%, despite the otherwise improving domestic conditions.

The upward revision for 2016 also reflects the government’s determination in hitting its official growth target this year through a combination of fast credit growth and potentially questionable statistical practices.

GDP increased by 6.7% year-on-year in the first three quarters of 2016, based on the official measure. Fast real estate investment growth was a key factor in sustaining growth within the government’s 6.5-7% target in the third quarter, despite falling exports and ongoing deceleration in private sector business investment. Sales of new homes increased by 43.2% year-on-year in Q1-Q3, suggesting growing risks of a bubble in China’s real estate sector (which accounts for 15% of GDP). 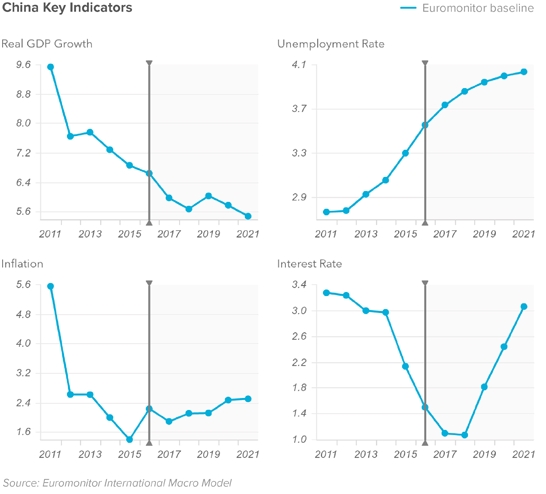 Services and consumption were again the main drivers of growth. Secondary sector (mainly industry and construction) year-on-year growth was 6.1%, while the tertiary (mainly services) sector’s output increased by 7.6% year-on-year. Consumption accounted for 71% of GDP growth in the first three quarters of 2016. Retail sales have also continued to grow much faster than industrial production, in line with China’s economic rebalancing. Private sector confidence indices have improved for households but are still below average for firms. 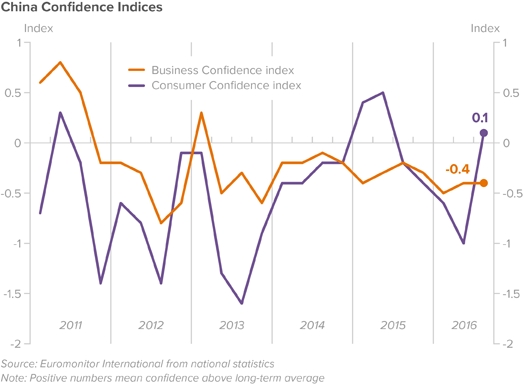 The main downside risks remain an excessively fast increase in the number of non-performing corporate and real estate loans, combined with a slowdown in consumer spending hindering the rebalancing of China’s economy from industry and investment towards services and consumption. A major downturn would reduce 2017 GDP growth to 2.9%. We assign this scenario a 10-20% probability in 2017. A more severe Chinese hard landing scenario would push GDP growth down to 0.6% in 2017. We assign a Chinese hard landing scenario a 5-15% probability in 2017.

In our optimistic scenario, China’s government gains further years of faster growth in the short-term through extra credit expansion and fiscal stimulus. The cost of this could be higher risks of a downturn or hard landing later in the decade. Faster than expected progress in rebalancing the economy also boosts private sector confidence, raising both consumption and investment relative to the baseline forecast. GDP growth in this scenario increases to 7.3% in 2017. We assign this scenario a 15-20% probability in 2017. 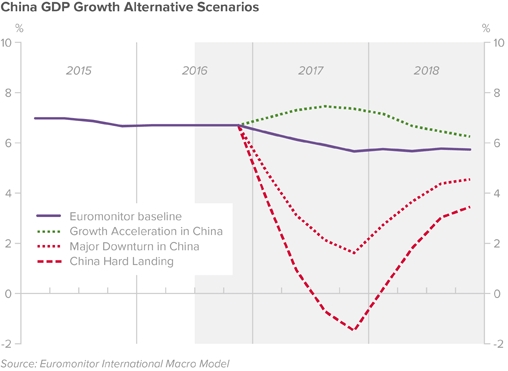 China’s Rebalancing, and the Shift from Saving to Consumption

China’s economic growth is on a long-term downward trend, mainly due to more limited room for convergence with advanced economies after the unprecedented growth of the last 30 years. However, the slower overall growth is still enough to sustain a fast increase in the spending potential of China’s middle and upper-income segments, providing significant ongoing expansion opportunities for consumer goods companies. 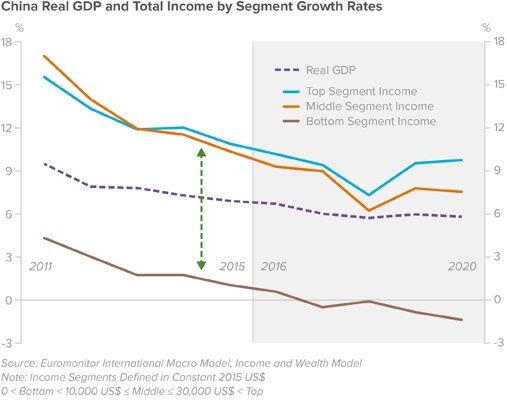 Economic rebalancing is expected to lead a significant decline in saving and investment rates from almost 50% at the beginning of the decade towards 40% by 2020. The current account is also expected to decline, reflecting the lower Chinese saving rate. The counterpart to this is that consumer spending is likely to continue increasing faster than GDP, growing at an average annual rate of around 7% over the next five years (compared to a 5.8% average GDP growth rate). The declining current account also implies that China’s growth going forward will likely be almost entirely domestically driven, with a much smaller role for export led growth. 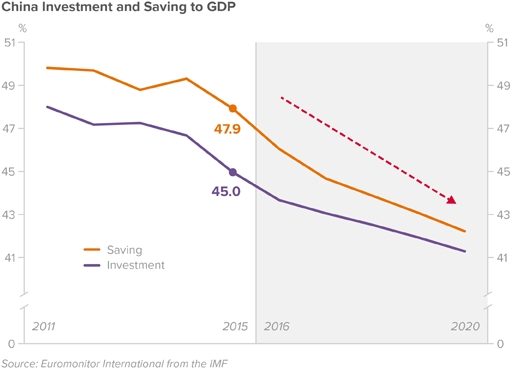 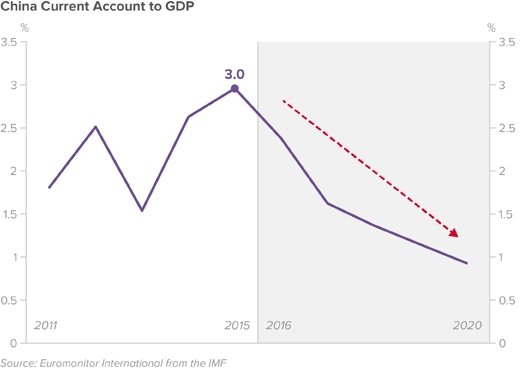 Credit growth in China continues to be close to twice that of GDP, with year-on-year loans growth in October of 13.1%. China’s private non-financial sector debt to GDP was above 200% in mid-2016. According to Moody’s estimates, total debt to GDP is more than 280%, taking into account government, SOE and financial sector debt. The rise in corporate debt owed by firms with insufficient repayment capacity is a particular cause for concern, leading to a growing number of bad loans. I n September, the Bank for International Settlements warned once again that China’s excessive debt levels lead to a high probability of a banking crisis over the next three years.

The Chinese government has recently started sounding more serious about tackling the growing amount of bad debt. The Ministry of Finance and the banking regulation authority issued a statement in October encouraging heavily indebted firms (“zombie enterprises”) to file for bankruptcy, and banks to write off their loans. Bad debt to equity swaps and mergers of high debt firms with healthier firms have started on a limited scale.

While excessive corporate borrowing is still the main danger, new loans in recent months have mostly been to households, financing the fast growth in new home sales. Chinese cities have introduced property sales restrictions to moderate the overheating real estate market. The head of the People’s Bank of China (the central bank) ordered executives of China’s top banks to reduce real estate loans. Given China’s government strong control over state banks, these new policy statements may actually restrain some of the excess lending. However, they are unlikely to be enough to stabilise China’s credit markets. 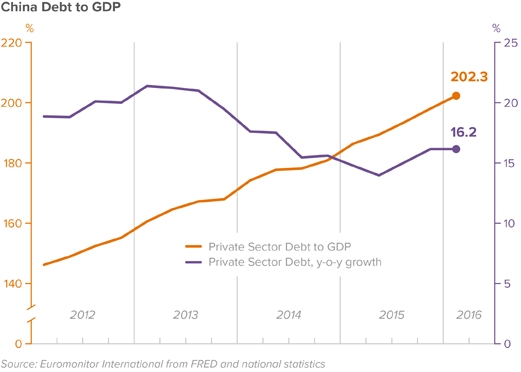 Global Recovery Tracker: Momentum of the Recovery Likely to Have Peaked

Global Overview of the Machinery Industry

The briefing examines how the machinery industry is performing globally and in the largest countries in terms of machinery output. The report also provides data…