General outlook: Gradual slowdown continuing, with a greater focus on the quality of growth.

China’s economy is continuing a very gradual slowdown, doing slightly better than expected in Q3. Ongoing high state sector investment and robust consumption growth should allow the economy to hit a growth rate of 6.8% for 2017, declining to annual growth of 6.2-6.3% in 2018-2019.

The 19th Chinese Communist party congress in October strengthened President Xi Jinping’s hold on power, raising the probability that he will continue as China’s leader beyond 2022. China’s leadership reaffirmed its commitment to gradual structural reforms at the Congress. It also signalled a growing focus on reducing inequality and environmental pollution, lowering the importance of official growth targets over the next five years. The greater emphasis on the quality of growth and the shift to a more consumption-oriented economy will maintain China as perhaps the world’s most attractive consumer market.

The first visit to China of US President Donald Trump in early November went well. Around 250 billion USD in new US-China business deals were signed during the trip, though mainly these were preliminary agreements without details. President Trump asserted that the trade surplus with the US is not China’s fault, and Chinese President Xi promised to open up Chinese markets to more US competition and investment. While these statements contain more symbolism than substance, the trip confirms a moderation of Trump’s position on Chinese trade issues since early 2017. Smaller trade conflicts in specific industries such as steel or computer software are still probable, but a major trade war is now much less likely.

Credit is still growing faster than GDP, despite the government’s official commitment to controlling financial system risks, and tighter restrictions on real estate and non-bank lending. With a high debt burden, an unexpected slowdown in real estate markets or lower private sector confidence and spending could cause borrowing conditions to tighten abruptly. In this downturn scenario, GDP growth would decline to 4% in 2018 and 4.8% in 2019. We assign this scenario a 10-20% probability in 2018.

The government could also boost short-term growth through higher fiscal stimulus, mainly by encouraging greater local government and State Owned Enterprises (SOE) investment. GDP growth could increase to 7.5% in 2018 and 7.1% in 2019. This would come at the cost of higher debt levels and raising the risks of an eventual downturn. We assign this scenario a 10-20% probability in 2018. 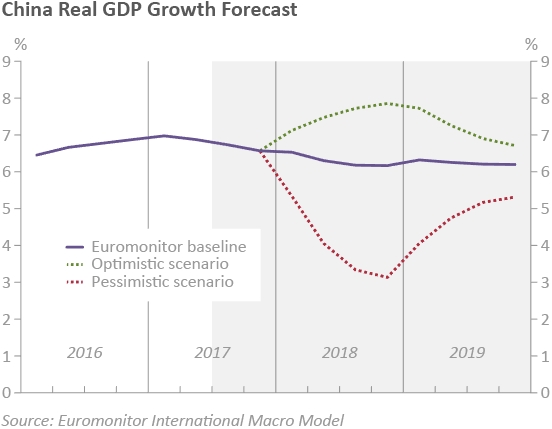 China’s economy slowed down less than expected in Q3 2017, with a growth rate of 6.8% year-on-year. Looking at monthly indicators, industrial production growth has declined to 6-6.5%, while real retail sales growth is now slightly above 8%. This is in line with a moderate deceleration in China’s economy going forward, coupled with ongoing rebalancing to consumption. Business and consumer confidence remain significantly above average, also supporting a smooth decline in growth. 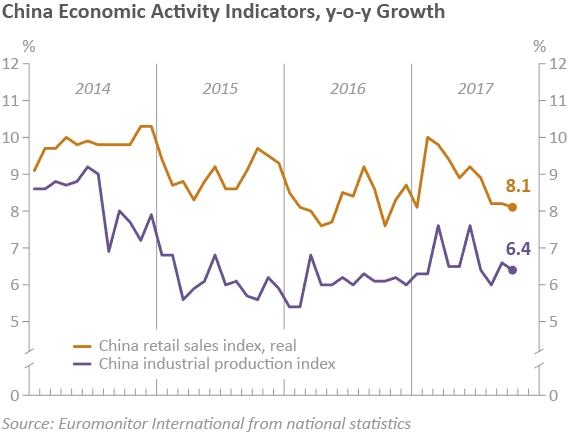 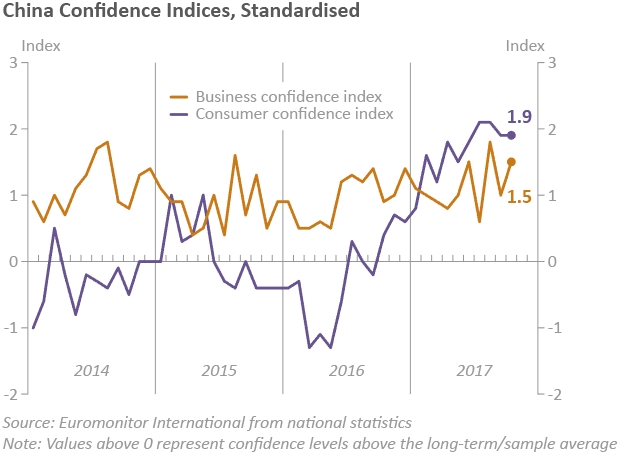 Consumption has accounted for 64.5% of recent growth, sustained by real disposable income per capita growth of 7.5%. Private sector consumption is expected to grow at an annual rate of almost 7% in 2017-2021. However, annual growth of the top household income segment (with annual household income above 45000 USD) is expected to be much higher, at above 13%. Middle-income segment annual growth (between 15000 and 45000 USD per year) will be close to 9%. From this perspective, despite the declining GDP growth, China will continue to be a highly attractive market for companies in the consumer goods sector. 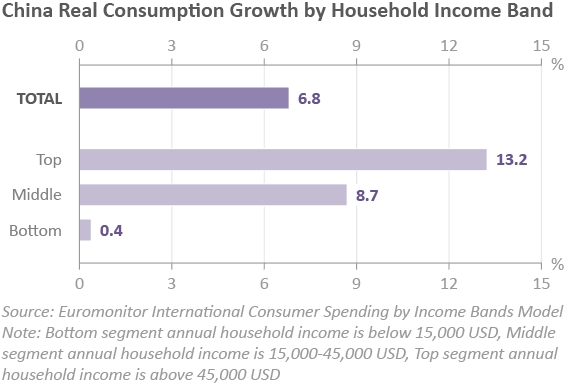 Fixed investment growth has slowed down to 7.5% year-on-year over Q1-Q3, due to tighter credit constraints in some sectors and ongoing efforts to reduce production capacity in heavy industry. Despite the growing importance of consumption, investment is still estimated to account for more than 44% of GDP in 2017 (down from a peak of 48% in 2011), and is still expected to be 42% of GDP in five years.

SOE investment growth remained much faster than average, at 11% year-on-year compared to 6% for the private sector. SOEs still account for around 1/3 of China’s GDP and almost 40% of investment, with a rate of return of less than half that of the private sector. This suggests there is still a lot of room for enhancing growth by reallocating more capital to the private sector. Ongoing reforms have increased the state sector’s efficiency. According to government statistics, SOE profits have increased by 24.9% year-on-year in Q1-Q3, SOE debt levels have stabilised, and the number of unprofitable “Zombie” enterprises has been substantially reduced.

Mixed ownership reforms (with private sector partners getting 30-45% ownership in participating firms) have also gathered pace. So far mixed ownership schemes have been implemented in 19 SOEs, with another 31 firms to be added in a third round. However, the main thrust of the reforms remains strengthening SOEs through mergers and acquisitions. Bigger SOEs could benefit from economies of scale in some sectors, but they could also limit competition. The focus on strengthening SOEs suggests a conservative approach to reforms that will maintain their dominant role in many industries.

At the end of September, the People’s Bank of China (the central bank) cut the required cash reserves ratio by 0.5-1.5 percentage points for banks meeting a minimum requirement on the proportion of loans to the small and medium enterprise (SME) and agricultural sectors, starting in 2018. This is in line with a targeted monetary policy approach, which supports private sector SME borrowing while reducing credit growth in other sectors such as real estate. 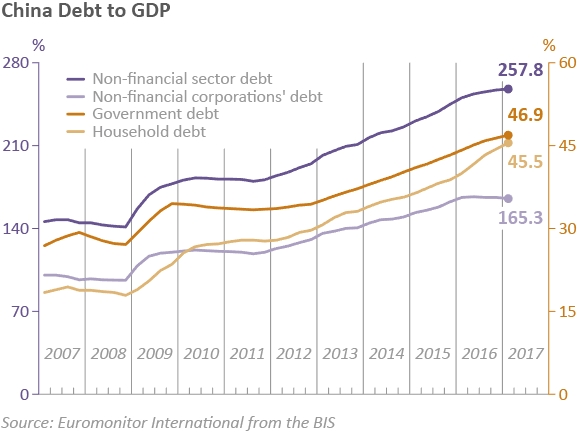 Throughout 2017, the government has tightened credit conditions, mainly for smaller banks and non-bank financial institutions that are responsible for some of the riskier loans. Recent measures have included limits on further borrowing by SOEs with debt to assets ratios above 75%, and interdictions on the use of consumer loans to finance real estate loans. However, overall credit growth has remained quite high, due to a faster increase in traditional bank loans. Total loans growth in recent months has been around 13% year-on-year. Non-financial sector credit is still rising faster than GDP and is likely to approach 300% by the end of the decade. 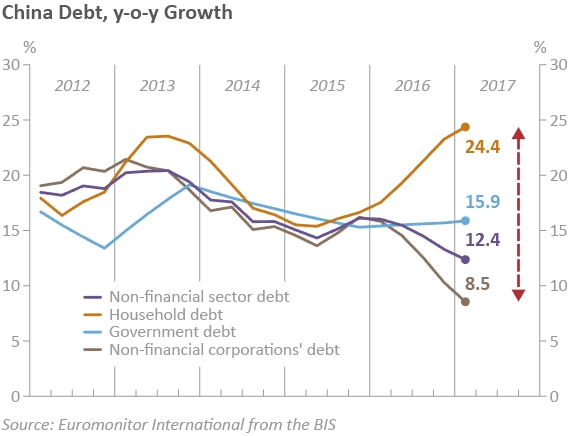 Corporate debt has started declining relative to GDP, but government and household debt growth have increased (though the overall level relative to GDP is still low). One consequence of China’s credit boom in the last 10 years is a big rise in the cost of servicing debt. Even if debt to GDP stabilises, the high debt service ratio makes China’s private sector vulnerable to an unexpected rise in borrowing costs. 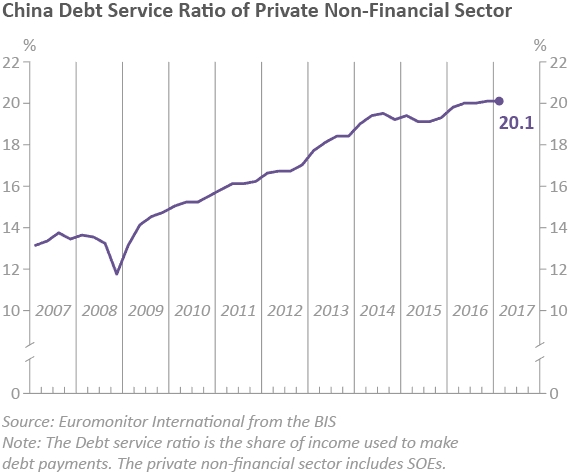 In our latest report extract, we provide you with an update on our latest macroeconomic forecasts for key economies and what these mean for our predictions for the global economy. Download Global Economic Forecasts: Q4 2017  to stay ahead of risks and opportunities as they emerge on a macroeconomic basis.