The Coca-Cola system of companies is in the process of major changes to their bottling and distribution operations. The company owns 76 principal beverage bottling and canning plants worldwide, including under its own Bottling Investments Group. This includes company-owned production: the bottling and distribution of finished RTD Coca-Cola products to retailers and foodservice operators. In October 2015, the company divested nine manufacturing plants to US independent bottlers. In Q4 2016 reporting, the company announced accelerated plans to consolidate and further franchise operations in Western Europe and China. The sale of lucrative, billion dollar operations in India could also be on the long-term agenda.

Coca-Cola’s distribution system is one of its major assets as a packaged goods company. The impact of refranchising will be therefore be substantial. Coca-Cola has provided guidance to investors indicating the expected impact of refranchising on the balance sheet, with shrinking net revenues but boosting profit margins. While changes risk short-term disruptions, the company hopes the new system will provide greater profitability over the long term. 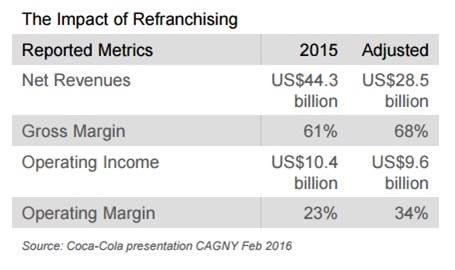 Consumers’ cautiousness in consumption of sugarised drinks, especially in developed markets, has resulted in slow growth or even decline in consumption of carbonates. Low-calorie colas are also experiencing flat sales. Diversification is a core strategy at this stage, with the search for profitable growth in still drinks being key to this. In developed markets, ageing populations, slow economic recovery and the trends towards health and wellness all point to consumption of still drinks, especially added-value natural or functional alternatives. 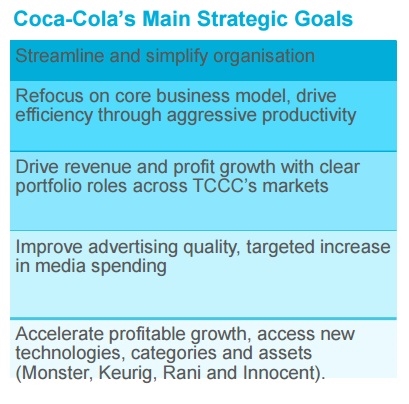 The success of the refranchising effort is contingent on partnering with (or building) large, reliable bottling partners with the scale and established record in the Coca-Cola system to integrate new territories. In Western Europe, a three-way merger between two established independent Coca-Cola bottlers (Coca-Cola Enterprises and Coca-Cola Iberian Partners) and the company’s remaining company-owned bottling operations in Germany (Coca-Cola Erfrischungsgetränke AG) will create a new entity: Coca-Cola European Partners (expected to finalise in June 2016). This is the largest European example of the company’s refranchising effort.

This deal is a much larger and more exciting proposition, creating the largest independent bottler of Coca-Cola products, and a powerful new partner in Western Europe. In particular, the deal seems to be an excellent fit for CCE's capabilities and expertise, bringing the high per capita soft drinks market of Germany under its umbrella, although its strong private label and discounter intensive grocery retail environment will present immediate challenges. The new bottling entity will also take responsibility for the struggling but high potential markets of Spain and Italy, where there is room to generate per capita growth across soft drinks if economic recoveries take hold.

To read more about the scope, scale and rationale behind Coca-Cola's operational changes (including profiles of leading global bottling players in this effort) please consult our latest briefing.

FIFA World Cup 2022 in Qatar: Raising a Drink, From a Dry Nation to the World