The reason that specialist coffee shops are so well positioned is that their primary offering – coffee – is an everyday and oft-repeat purchase. Indeed, in 2013 US consumers averaged over one cup of coffee per day. A large number of coffee shops purchases are made by commuters looking for their morning jolt on the way to the work.  The high frequency of purchases by coffee shops patrons make these consumers prime candidates for the streamlined payment methods and loyalty benefits afforded by mobile payment technologies. Furthermore, coffee shops are most attractive to demographics that have both access to and interest in mobile technology: affluent consumers, and younger tech-savvy consumers like students.

Aware of this compatibility, an increasing number of third-party mobile payment technologies that explicitly target coffee shops are being launched in the US. These mobile platforms aim to enable independent coffee shops to better compete with giants like Starbucks that have the in-house resources to develop this mobile functionality. Two noteworthy launches include CUPS, a subscription service, and BeansUp, a customizable interface that can set coffee pick-up times.  Both apps offer innovative features to enable independent coffee shops to drive more revenue through mobile payments and thus better compete against chained giants for consumer engagement.

CUPS, an app designed by Israeli entrepreneurs, aims to enable smaller, independent coffee shops to heighten their consumer engagement through mobile payments by providing loyalty incentives. Although mobile payment is still in its early days, loyalty is one main driver of consumer adoption. As evidenced by Starbucks, whose use of a QR code is neither advanced nor significantly more efficient than other forms of payment like cash and cards, the success of a mobile platform depends largely on consumer incentives.  For Starbucks, the incentive of its mobile payment platform is its tie to Starbucks’s already popular loyalty programme: consumers receive rewards in the form of discounts and special deals, based on their cumulative purchases.

Launched in the US in April 2014, the subscription-based CUPS app (available for iOS and Android platforms) offers its users essentially unlimited coffee or espresso drinks for a flat monthly fee. Standard, filtered coffee (either brewed by the batch or individual pour-overs) and tea costs US$ 45 per month under the ‘American Classic’ package, while unlimited espresso-based drinks and iced coffee costs US$ 85 per month in the ‘Foreign Flair’ bundle. CUPS also offers shorter length subscriptions for 5, 11, and 23 cups. Once consumers create an account on their mobile phone, they can choose from one of several participating coffee shops to select a drink based on their subscription type. A payment code appears on the phone, which is then shown to the barista who types it into their own POS system. The only caveat to the unlimited offer is that more than one drink cannot be ordered within a thirty-minute time frame.

Because CUPS is a third-party service, it allows consumers to vary their coffee shops choices, rather than being tied to a particular brand. Until recently, coffee preferences in the US were rigid, with consumers unlikely to switch from their particular brand in both retail and foodservice choices. However, the proliferation of third wave coffee shops – smaller shops that emphasise the artisanal nature of coffee roasting and preparation – has increased the amount of coffee brands on the market and is encouraging consumers to be more experimental in their coffee choices. Rather than sticking to one brand, patrons of independent coffee shops are often eager to sample different coffee shops, maintaining a portfolio of coffee options rather than sticking to a solitary brand. While CUPS members enjoy having access to a variety of coffee shops, the coffee shops enjoy increased foot traffic and the ability to better compete with bigger chains. At the time of writing there are 47 participating coffee shops in New York City, which is an increase of 34% in outlets in the three months since the app’s initial launch.  CUPS is also available in over 100 coffee shops in Tel Aviv and Jerusalem.

In addition to the varied choice of coffee shops, CUPS’s prime incentive is its flat-rate pricing model, which drives down the retail cost per cup of coffee – a huge benefit for frequent coffee drinkers. The company’s co-founder, Gilad Rotem, stated on the record that CUPS users save approximately 30% on their overall coffee purchases. Participation in the app is free for coffee shops, with CUPS paying back the shops for each beverage at a discounted rate. Critics point out that CUPS’s subscription service might lower the quality of some coffee shops offerings to maintain better margins since they are essentially selling every cup at a discount. Still, CUPS’s ability to provide these smaller shops with a loyalty program that can better compete with chained players like Starbucks and Dunkin’ Donuts may actually encourage participants to increase the quality of their offerings and even to launch more premium drinks in order to extend their consumer base.

In addition to economic incentives and more choice, mobile payment apps can appeal to specialist coffee shops patrons through the promise of an enhanced consumer experience, an effective way to drive brand loyalty.  The high volume of purchases at specialist coffee shops costs consumers time as well as money.  Because coffee is such an integral part of part of the morning routine of many US consumers, time is often of the essence to many coffee shop patrons. BeansUp, app from Northern Ireland, and recently introduced to the US, aims to minimize the wait time at coffee shops by enabling consumers to set their own pick-up time. Allowing users to not only pre-pay, but also pre-order provides a nearly seamless foodservice interaction, as consumers can avoid rush-hour lines and head straight to the pick-up counter.  The pick-up feature may also increase the frequency of coffee shops visits, as the time saved may make more occasions possible.

The BeansUp app has a fully customizable interface, plus many options for promotions and loyalty 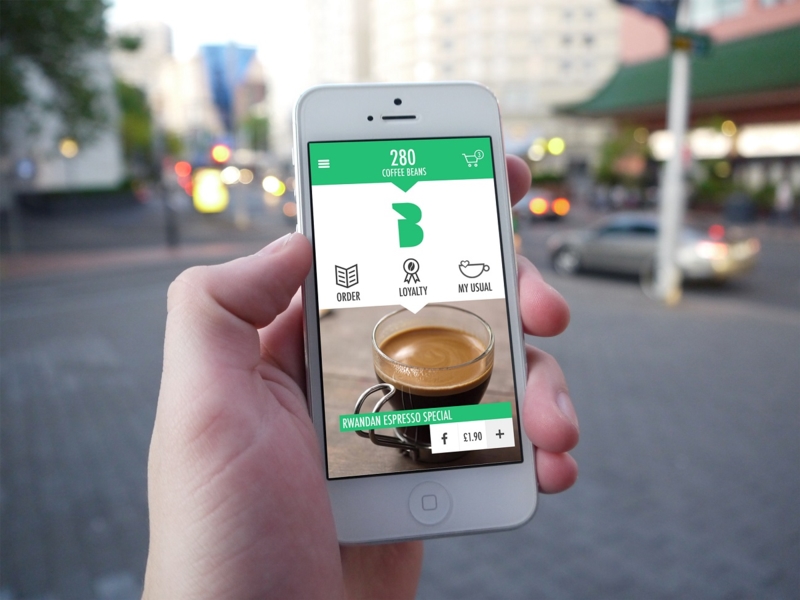 Like CUPS, independent specialist coffee shops are the primary audience for BeansUp. However, rather than serving as the brand that consumers interact with, BeansUP acts as the behind-the-scenes interface for specialist coffee shops to then customize and stamp their own brand on. BeansUp’s mobile technology enables coffee shops to set up their own loyalty and rewards programmes, as well as send personalised offers to consumers, allowing them to engage directly with consumers through the mobile phone. The coffee shop's staff can see orders arrive in real time and can enter orders into the POS system  as they would a card payment. The ordering system is cloud based and offered at a flat-rate subscription to coffee shops. While BeansUp’s US presence is too recent to evaluate, its claims of ease of ordering and personalisation – the barista will be able to see the consumer’s name when he/she orders – exceed most of the current mobile payment systems available.

It is no accident that it is a specialist coffee shop – Starbucks – that has had the most success thus far with mobile payments within US consumer foodservice. High frequency creates demand for efficient transactions — a key prerequisite for a successful mobile payment platform. Still, at this early point in the digital revolution, to convince consumers to adopt mobile payments, there must be additional incentives tied to the transactions.  Subscription-services and enhanced customer service are intriguing first steps. The continued success of any mobile payments app, however, will depend on advancing consumer engagement. That will in turn drive not only the use of mobile-payments, but also increase foot traffic and consequently revenues for foodservice outlets.