The Coca-Cola Company (TCCC) and PepsiCo recently held their analysts conference on Q4 2015 financial results. TCCC announced plans to refranchise and focus on brand building and marketing, whereas PepsiCo’s discussion of growth initiatives appeared a bit vague with little mention of the progress of the integration of the Power of One Strategy in the meeting. This is perhaps the right time to have a quick look at what their positions would be in 2020, assuming carbonates continues to slow.

Euromonitor International’s latest research shows that bottled water is set to be the growth driver in many major soft drinks markets, while carbonates will see a noticeable slowdown. Using figures from Competitor Analytics we demonstrate a scenario illustrating how the cola giants’ market shares will look, assuming carbonates continues to slow far into 2020. This is part one of the two-part series. Part one exhibits the impact of slowdown of carbonates on cola giants, and part two shows how Danone and Nestlé may stand in 2020. 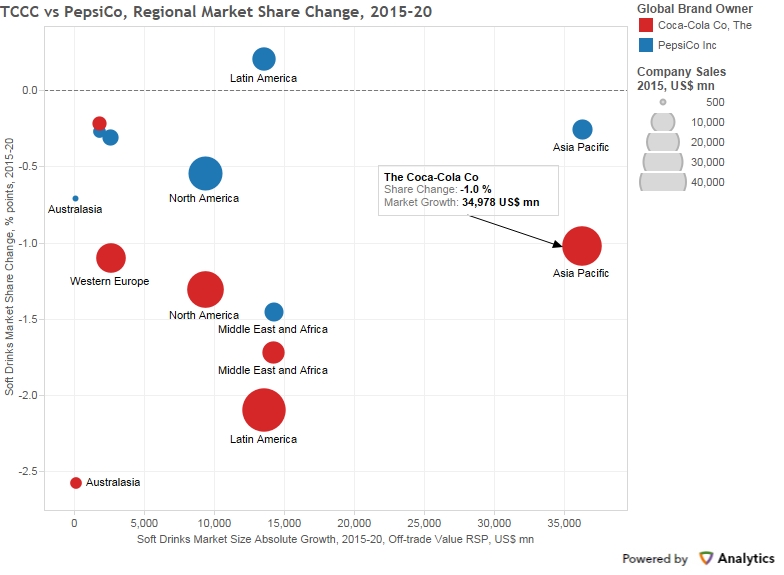 Here are the key findings for part one:

Figure 1, the bubble chart shows that overall soft drinks remains a growth market, with no region expecting a decline. Emerging markets will continue to drive growth. However, the story is more difficult for soft drinks cola giants as both TCCC and PepsiCo will see market share erosion in off-trade value terms in most regions. The market share declines are more pronounced for TCCC which is expected to lose share in all regions, whereas PepsiCo is expected to lose share in all regions except Latin America. The continuous decline in market share is a reflection of declining sales of carbonates within soft drinks as a whole market, especially in North America and Western Europe, due to consumers giving preference to other categories.

Asia Pacific is set to record absolute growth of US$34 billion in 2015-2020, outperforming other regions in actual terms. TCCC is likely to encounter a loss of market share by over one percentage point. In addition, the size of the bubble shows that Asia Pacific is a more important market for TCCC than PepsiCo. Thus, TCCC may be in more desperate need to sustain and grow its market shares in Asia in order to capture the regional growth fully.

Figure 2, the bar chart shows soft drinks’ global growth prospects by category in relation to cola giants’ possible contribution in 2015-2020. As a global brand owner (GBO), PepsiCo is likely to lose share in bottled water, sports and energy drinks, juice and concentrates. In juice, for example, PepsiCo will continue to generate much lower sales compared to TCCC. Assuming PepsiCo sticks to its alliances with Unilever (RTD tea Lipton) and Starbucks (RTD coffee) in the next few years, PepsiCo may not be able to fully benefit from the potential growth of RTD tea. As bottled water is set to be the category driver and smaller and regional players are the big contributors, both TCCC and PepsiCo still have an opportunity to grab share from their rivals.

TCCC may make a noticeable share gain in RTD tea in 2020 as it is expanding its tea brand portfolio. In 2016, TCCC is launching Fuze Tea in Australia, backed up by big-budget marketing campaigns. Alarmingly, PepsiCo’s position in sports and energy drinks may be impacted by its rivals. TCCC now holds a minority stake in Monster; it will be in a much better position if it fully acquires Monster by 2020.

In brief, the whole picture demonstrates that both cola giants may be in unfavourable positions in the global soft drinks market in 2020 with a decline in carbonates anticipated. Both companies need to accelerate their diversification in terms of categories and geographies. PepsiCo should look to build a strong portfolio of still drinks brands in Latin America and Asia Pacific.