In Glasgow, the 26th Conference Of the Parties has a clear focus on climate change. The public interest, as estimated by the number of Google searches made in relation to previous COP meetings, is on par with the Paris conference of 2015, which saw the signing of the milestone Paris Agreement. Notably, such interest has been recorded even as the wider public interest in Green Action such as reducing food waste or plastic use has fallen significantly during the pandemic, according to Euromonitor International’s Voice of The Consumer: Lifestyle Survey.

One of the topics that has come high on the agenda of COP26 is limiting methane emissions. The atmospheric concentration of this very potent greenhouse gas is now 15% higher than it was in 1983. Unlike CO2 from fossil fuels however, this gas is mid-term cyclical. Methane remains in the atmosphere for approximately 10 years before decaying into CO2 to become absorbed by plants. This means that efforts to reduce emissions of methane into the atmosphere could lead to a gradual decrease in its atmospheric concentration over the next decade, essentially reversing a part of its contribution to global warming.

This again places dairy and meat production in the spotlight. Proponents of a plant-based transition in packaged food have long decried the environmental impact of beef and dairy. Bacteria in cows’ digestive systems produce methane which enables them to digest grass, also contributes to the productive usage of 67% of the world’s agricultural land. However, a ground-breaking finding has potential to disrupt this process. By supplementing cows’ feed with the red macroalgae Asparagopsis taxiformis, there is hope for a greater reduction or even total elimination of methane production in cows, sheep and goats. To put this into context, fully eliminating methane emissions from livestock would yield a 39% reduction in agriculture’s global warming potential.

Overall, agriculture is responsible for less than 12% of World Greenhouse Gas Emissions. While this is a small proportion in relation to the energy sector (including fuel for transport), it cannot be ignored. Changes to food production have the potential to help reduce global warming at a comparatively moderate cost. Development in the last 30 years has been rapid. Global agriculture today feeds 2.2 billion more people than it did in 1993 with only 2.5% greater usage of agricultural land. Global production of beef has increased by 37% compared to 1993 with only a 0.5% increase in permanent pastures, and yet greenhouse gas emissions from agriculture in Europe have fallen by 34% since 1990. Greater efficiency is therefore possible in the years to come.

A key breakthrough that has contributed to reduced emissions in European agriculture is the introduction of Selective Catalytic Reduction (SCR) in which ammonia reacts with nitrogen oxide in nitrogen fertiliser production, yielding side streams of nitrogen gas and water. While this includes the use of ammonia, it eliminates emissions of the very potent greenhouse gas nitrogen oxide. The effect is a 55% reduction in the global warming potential of nitrogen fertiliser production. Initially launched by Yara International in Sweden in 2010, it is now dominating European fertiliser production. To put this into context, this single technology change reduces the global warming potential from cereal production by an incredible 20%. The next step is to change natural gas for renewable energy to heat and pressurise the chemical process, with production expected to start in 2023.

Building on this efficiency in fertiliser production, Svenskt Sigill (Swedish Seal) has launched a climate certification scheme, whereby primary producers need to use SCR-manufactured fertiliser. In 2021, Dava Foods became the first secondary producer to gain certification for its egg production by substituting soy from areas linked to rainforest clearing with climate certified corn gluten and potato protein. The certified eggs are estimated to have a 50% lower climate impact than that of competitors. Meanwhile in October, UK-based company Respectful launched the world’s first carbon-neutral eggs. 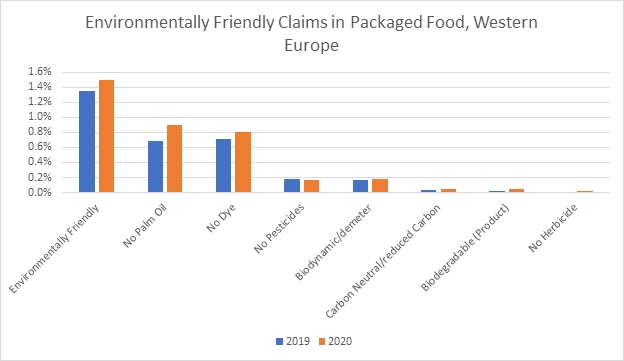 With greater interest in mitigating climate change, consumers are likely to search for climate certification labels on packaged food if the price premium is reasonable, yet carbon-neutral/reduced carbon claims are only evident on less than 0.1% of SKUs, even in Western Europe. This is the region with the highest intensity of such claims, and growth in 2020 reached 18%. Availability of climate certified eggs is a milestone on the way to making climate certified complex packaged foods a possibility, as these depend on availability of a wide range of certified ingredients. Climate certified meat and dairy may also soon become a reality. Nestlé for example, aims to reduce total global warming potential from its dairy and livestock supply chain by 15% by 2030, while allowing for 48% volume growth. This should lay the foundations for a climate efficient food supply chain and the future breakthrough of a comprehensive climate label – a “holy grail” for campaigners.

Asia Pacific remains the largest region globally for rice, pasta and noodles. Positive growth has continued to be seen in 2022, in spite of price increases…