On 5 June 2017, the governments of Saudi Arabia, UAE, Egypt and Bahrain announced that they were cutting diplomatic ties with Qatar, over claims of the latter sponsoring terrorism. Travel bans were put in place such as flight bans and port closures, which will clearly have a highly disruptive effect on destinations, airlines, hotels and tour operators in the GCC and wider Middle East.

The overall size of the Qatari outbound market is relatively small at 2 million departures in 2016 to the rest of the world, however, Qataris spend a lot per trip, with an average outbound spend per trip of USD1,400 and showing a positive upward trajectory. Overall outbound expenditure reached USD2,617 million in 2016.

Departures from Qatar to Saudi Arabia 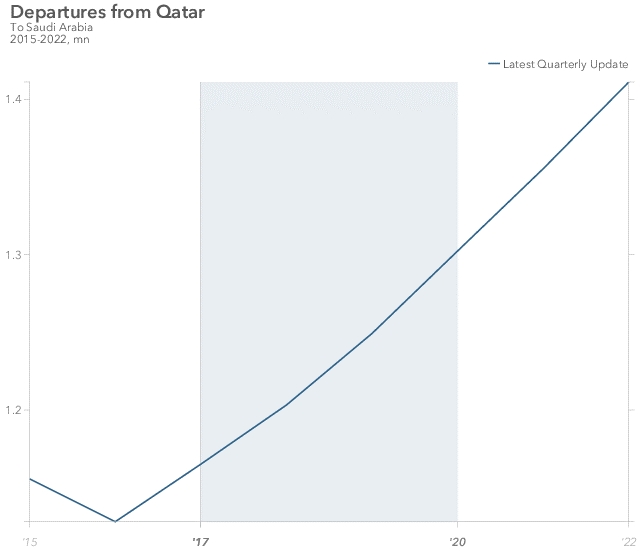 The impact of cutting ties with Qatar on inbound tourism to the four countries will vary, based on the level of dependency on Qatar as a source of demand. In the case of the UAE, Egypt and Bahrain, Qatar accounts for a small share of their inbound arrivals, of 1% or less. Whereas, Qatar plays a more important role as a source market for Saudi Arabia, accounting for 7% of all arrivals amounting to 1.3 million trips, and more significantly, 27% of all inbound receipts that Saudi Arabia generates from international tourism.

Severing ties with Qatar will act as a drag on tourism spending, especially for Saudi Arabia. Pre the diplomatic dispute, Euromonitor International’s Travel Forecast Model indicated that outbound expenditure from Qatar to Saudi Arabia would grow strongly at 5% per year over 2017-2020. The trend will go into reverse seeing as the flows between the two countries will be stopped, and the severity of the downturn will depend on how long the diplomatic dispute lasts and when relations normalise.

The Middle East is home to the big Three carriers of Emirates, Etihad and Qatar Airways that have expanded rapidly across the globe in the last 15 years or more, thanks to liberalization and open skies, much to the chagrin of many a legacy carrier around the world.

Considering the high spending power of Qatari travellers, they will be a sorely missed source of revenue in the short term.

Qatar Airways, a five star airline, is the smallest of the Big Three, with a 2.6% share of the Middle Eastern airlines market in 2015, amounting to USD1.4 billion. Qatar Airways has a reasonable presence in the UAE market and Saudi Arabia, with 5.7% and 4% respectively. However, it has been losing in the UAE market due to intense price competition from the domestic carriers of Etihad and Emirates.

With flight bans in place and the exposure that the three Middle East carriers have to each-others markets means that it is unlikely that there will be any winners in the short term.

Experience More In The Next Normal

How Three of the Top Global Consumer Trends Are Impacting the Way We Eat, Pay and Travel

What Next for Airline Players in the Post-Covid Business Environment?

No major player in the travel industry has escaped the impact of the travel restrictions resultant from the on-going global pandemic. However the impact has…

Physical space has been undergoing drastic changes as a result of the huge shift towards e-commerce, adoption of new technology as well as the impact of the…