India: a country where 97% of transactions in volume terms still happen with cash. Is such a cash-dependent economy ready for a cashless digital economy? This question was put to the test during recent demonetisation when 86% of cash currency in the country was withdrawn overnight on 8th November, 2016. Since then, consumers from various income strata, as well as large and small local vendors, quickly adapted to new and alternative payments - digital wallets, banking apps.

Although a disruptive move, demonetisation has seeded the growth of digital finance in India. Following demonetisation, consumers, the Indian government and private players came together and acted synergistically on a number of digital payment initiatives. While some of this coordination and swift action was a temporary reaction to demonetisation, other long-term factors demonstrate that India is ready for a digital revolution and permanent shifts to digital may be on the horizon.

Factors which will drive the growth of digital payments in India: 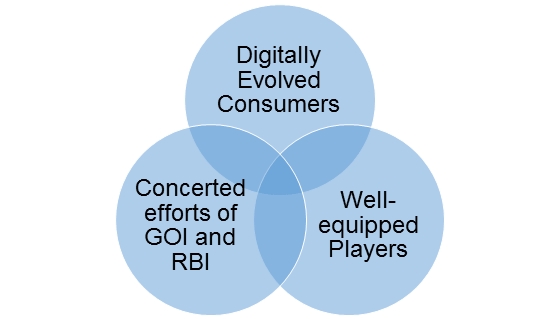 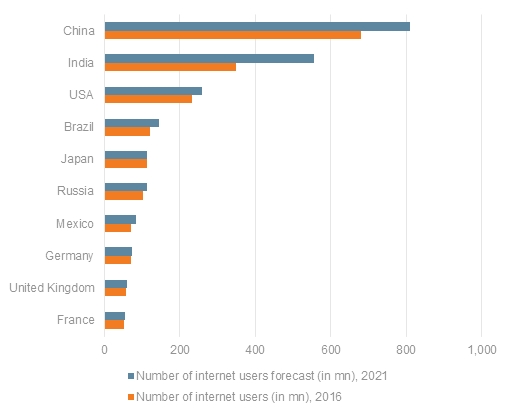 M-commerce has boomed in tier-2 and tier-3 cities in India, in large part due to the availability and penetration of inexpensive smartphones. Mobile internet retailing, has grown significantly from 5% in 2012 to 17% of total internet retailing sales in 2016, with faster growth than internet retailing through other devices and channels (2012-16 CAGR for mobile internet retailing was 134% as against 68% for other internet retailing). Online retailers offering huge discounts on purchases via mobile app drove much of this growth, with retailers successfully bringing more consumers onto their mobile platforms and increasing traffic. According to Flipkart and Snapdeal (two large e-commerce players in India), apps and m-sites accounted for over 80% of their traffic during their big sale days in October 2016. Reliance’s recent Jio launch was disruptive enough to bring down prices of mobile internet of other service providers sharply towards the end of year 2016. Ongoing decreases in mobile data charges will further fuel the growth of m-commerce.

M-banking and wallets to benefit most

While the cashless economy will continue to grow via plastic cards, its growth will be restricted mostly to major cities due to lack of infrastructure supporting card payments in more rural areas. Indeed, such lack of infrastructure has been the primary reason card transactions remain at less than 1% of total transactions and will continue to be a major obstacle. In such a scenario, mobile wallets and m-banking via apps, which could be easily downloaded onto a smartphone, offer the only two instruments that could break the monopoly of cash transactions in India in near future 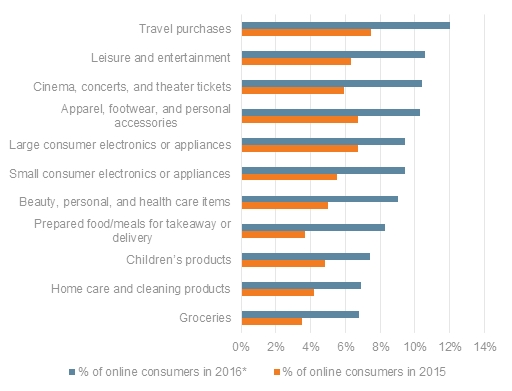 Tech-savvy online Indian consumers are willing to try new products or services (81% surveyed by Euromonitor in 2016 reported agreement on this). Products or services which offer convenience will be highly preferred, as again about 80% of consumers said they are looking for ways to simplify their lives. Initially amazed Indian m-shoppers are now becoming habituated to the convenience of shopping on their phones, and mobile apps are the typical entry point for three-quarters of Indian consumers who reported at least one mobile purchase last year. 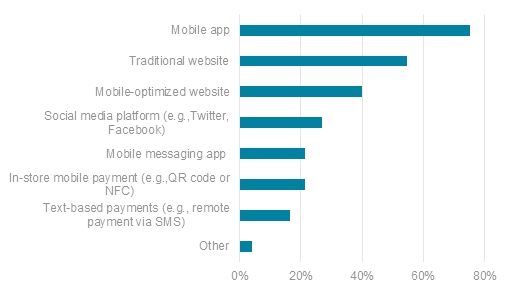 Note: Showing percentage among respondents who reported at least one mobile purchase

The fact that the Indian government is determined to spread financial inclusion by ensuring banking services are available for all will also contribute positively to the spread of digital payment services. Pradhan Mantri Jan Dhan Yojna – a national mission for financial inclusion to ensure access to financial services in an affordable manner – launched on 28th August 2014 and enrolled over 260 million unbanked Indian population majorly from rural areas into banking services. Now, Prime Minister Narendra Modi himself is endorsing digital payments for a cashless economy through Bharat Interface for Money (BHIM) app based on United Payments Interface (UPI). UPI facilitates the fund transfer between two bank accounts on the mobile platform instantly. It offers a common platform for all banks in India and will allowaccount holdersacross banksto send and receive money with ease via the BHIM app. The app was launched on 30th December 2016 in two majorly-spoken languages, English and Hindi, with support for other regional languages expected soon. Following Modi’s endorsement, the BHIM app reached the ‘Top free apps’ category in India with three million downloads within first month of launch.

The Reserve Bank of India (RBI) issued licences to 11 companies in 2014 to operate as payment banks and of those Airtel and Paytm have started operations. More recently, India Post, which is a government-operated postal system, too got the nod to operate as payment bank. Payment banks are meant to provide basic banking benefits to the rural unbanked population via mobile phones. This first-of-its-kind public-private partnership is expected to bring both consumers and small merchants/ shopkeepers together on a digital platform. To lure consumers some of these payment banks, namely Airtel and Paytm, are offering interest as high as 7.25% on money stored in these wallets, as well as additional discounts on transactions.

Efforts of both Government of India and RBI in the direction of financial inclusion via mobile phones will help more consumers adopt to m-banking and commerce in coming years.

While consumers are getting habituated to using apps, many private players including e-commerce companies, banks, and individual mobile/online wallets companies have started offering mobile payments, recharge, shopping, bill and peer-to-peer payment options with huge discounts and cashback offers in order to woo and bring consumers on their platform. Paytm, FreeCharge, Mobikwik, and Airtel are currently some of the most popular players. These players took advantage of an opportunity as the limit on cash withdrawal following demonetisation raised the demand for digital cash from consumers as well as merchants. They aggressively partnered with both big and small retailers to penetrate the market. For instance, Paytm money is now accepted by roadside small shops and tea stalls. Some of these wallet companies have also applied and acquired licences to operate as a payment bank (ie, Paytm and Airtel).

On April 11, 2016, Airtel - the largest mobile network operator in India was first to receive an RBI licence to launch its payment bank in India. Airtel Bank has plans to expand payments bank service by leveraging Bharti Airtel's national distribution network of over 1.5 million retail outlets, with deep penetration in rural areas.It started its pilot project in Rajasthan with its 10,000 Airtel retail outlets in towns and villages across Rajasthan functioning as banking points and offer convenient banking services to customers and later rolled out its services in 3 other states - Karnataka, Andhra Pradesh and Telangana.

Paytm, which is India’s biggest mobile wallet in terms of user base, also received a licence from RBI and its wallet will now act as a payment bank. According to the company, currently Paytm has 147 million active transacting users and claims to have recorded one billion transactions in the year 2016 with over one million registered merchants on its platform. Post-demonetisation, Paytm’s founder Sharma said in an interview that Paytm has been signing up the equivalent of a small European country's worth of customers every week and has attracted a range of vendors from Burger King and Dominos to roadside tea sellers and rickshaw drivers.

RBI on 20th January issued licence to India Post, which has been the backbone of the country’s communication for more than 150 years. India Post will follow a bottom-up approach, targeting people who either have feature phones or no mobiles at all.The CEO of India Post Payments Bank, Ashok Pal Singhsays “Our USP is door-to-door banking with the help of the postman.” The Indian government allocating Rs. 500 crore to India Post for Payments Bank underscores the government’s commitment towards financial inclusion.India Post Payment Bank is expected to start operations before March 31, 2017 and will be gradually rolled out in 650 districts using the network of 1.54 lakh post offices.

Growth Inhibitors Exists but Opportunity Lies in Maintaining the Momentum

Reluctant small merchants trying to hide income to reduce their tax bills might act as a deterrent to the growth of a cashless economy. However, such merchants are already suffering from declining consumer footfalls heading to bigger retailing formats and e-commerce, so these merchants will likely quickly adapt to digital commerce as they know that they need to keep pace with new technology or else will be left out.

Age-old cash habits could act as another deterring factor, especially now when cash is back in circulation and the effect of demonetisation is fading. Both government and private players should keep consumers motivated to use cash-alternative payment instruments. The Indian government has already announced a series of incentives from free insurance to discounts on digital payments, which will continue to boost consumer motivation to become and remain cashless.