Western Europe is the second largest global market for luxury jewellery and timepieces, behind Asia Pacific. Although the region has struggled due to the Eurozone crisis over the last five years, the market has remained resilient, with a CAGR of 3% during 2009-14 and total value sales reaching US$18 billion. This positive performance has been bolstered by countries largely unaffected by the economic crisis such as Sweden, Switzerland and, to some extent, even the UK, seeing value growth of 6%, 3% and 4% in 2014. Somewhat more impressive is that the sales for luxury jewellery and timepieces in more economically-affected countries such as Italy and Spain remained positive, with a 1% growth in retail value sales.

A division of sales from foreign and domestic spend is clear as tourism in Western European countries is on the rise. A 23% increase in tourist arrivals was seen in 2014 compared to 2009. While foreign spend on luxury jewellery and timepieces remains smaller in percentage terms, value spend tends to be higher as the jewellery and watch brands they are looking for are of the absolute luxury nature. Therefore, foreign spend on luxury jewellery and timepieces has become equally important as domestic for driving sales in Western Europe.

Sales of Luxury Jewellery and Timepieces in 2015: Domestic vs Foreign Spend % Split 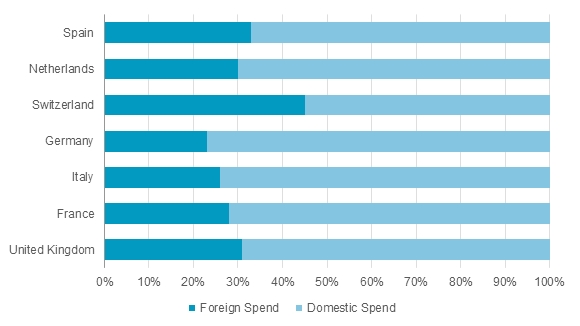 Luxury shoppers are welcomed from a far

The thriving market for luxury goods is predominantly based on the influx of wealthy tourists from Asia, Russia and the Middle East. These consumers are interested in purchasing absolute luxury jewellery and watches from exotic and stylish locations in Europe, especially those offering a host of luxury heritage brands such as France, Italy and Switzerland. The concept of the Swiss-Made Watch continues to define luxury timepieces for overseas consumers.

Prices for luxury jewellery and timepieces are often much lower in euros or pounds than for their respective home countries, enticing consumers to travel specifically for the purpose of luxury shopping; the euro-yuan exchange rate is making continental Europe the current hotspot for luxury consumers from Hong Kong and China.

Luxury jewellery and watch retailers and brands are left with a strong incentive to cater to this growing consumer base. Countries such as the UK, Italy and France have seen brands and retailers adapting their product lines and creating a purchase experience to favour tourists.

While many countries in Western Europe have seen luxury retail sales slow through domestic consumer spend due to austerity, aside from a small percentage of wealthy consumers who remain unaffected by the economic climate, domestic consumers are turning towards more affordable luxury brands.

In terms of brand shares for Western Europe, Michael Kors has championed the so-called rise of affordable luxury, offering simple but stylish designed watches and jewellery, particularly popular in women’s luxury timepieces. The brand reached total value sales of US$141 billion in Western Europe with astonishing actual growth of US$49 billion from 2009-2013. Not only has Michael Kors become Western Europe’s number one affordable luxury brand, sitting alongside the rankings of premium brands such as Breitling and Hermès, it has also played an influential role in fashion, accredited with driving the trend for rose gold watches. Other notable affordable luxury brands include Thomas Sabo and Swarovski.

Looking forward, the CAGR for luxury jewellery and timepieces in Western Europe is expected to slow down to 1% in value over 2014-2019. Threats to the economic climate in China and Hong Kong and political instability in Russia, as well as the clampdown on corporate gifting in China, all pose serious concerns to sales in Western Europe.

Markets in Western Europe must focus on catering to both tourists and domestic consumers simultaneously to continue to see growth. While brands have been somewhat Asia-focussed in catering towards tourist spend, we may see more of a focus towards Middle Eastern and sub-Saharan African tourists. Separately, neither group can secure a positive outlook for the industry, but simultaneous effort towards both consumer groups can secure growth in an unsettled market.

The COVID-19 pandemic has transformed the consumer landscape, giving rise to changes in consumer priorities and preferences. This requires companies across a…