Dr Pepper Snapple Group (DPS), the perennial number three player in North American carbonates, is expected to report its third quarter earnings this week. The expectations of financial analysts covering the company are broadly positive, after a strong first half of the year in which sell-in volume sales for DPS grew by 2% and net sales (currency adjusted) increased by 4%. The company’s share price hit a 52-week high this week. While lacking the global scale of Coca-Cola or PepsiCo, the company has a few core advantages that strengthen its position and support an optimistic outlook.

In the second quarter of 2015, back in July, DPS reported year-to-date 2% volume growth in terms of case sales of carbonates to bottlers. Flagship brand Dr Pepper demonstrated flat case volume growth, while the company’s second-tier brands (including 7-Up, Canada Dry, A&W and Sunkist) improved by 1%. This recovery comes after the company refocused its marketing efforts away from the unsuccessful mid-calorie ‘TEN’ range in the US, a launch which suffered from a muddled brand message and negative consumer perception of artificial sweeteners, amidst a decline in volume sales of low calorie ‘diet’ carbonates in the US.

The bright spots in the carbonates portfolio so far this year have been Schweppes – up 8% YTD in the second quarter – and Peñafiel, a Mexican mineral water/carbonates brand that the company has aggressively attempted to market to Hispanic consumers in the US in 2015. This important demographic strategy aligns closely with the Southern geographic hub of Dr Pepper Snapple brands, and has been extended to other brands including 7-Up and Dr Pepper itself. Peñafiel has remained a major North American marketing push for the company, and is a brand to watch closely in forthcoming third quarter reporting. Lighter tasting, fruit-flavoured carbonates may appeal to evolving consumer tastes in the category, with Peñafiel offering both lower calorie mineral waters and sweeter, flavoured carbonates options under the same regionally popular brand name.

Premium stills are the real stars of the portfolio

If carbonates have been a mixed bag for Dr Pepper Snapple, then non-carbonated drinks have been the true stars in the company’s product portfolio. The company’s ‘water’ portfolio (including coconut water brand Vita Coco, Bai5 low-calorie juice drinks and super-premium Fiji water) should remain an area of growth, with a high single-digit performance in the first half of the year. The company continues to make investments in new, high-value, functional beverages that remain the best overall growth opportunity in North American soft drinks. In August 2015, the company made a US$20 million investment in BA Sports Nutrition LLC, the owner of BODYARMOUR sports drinks. The company’s considerable levels of cash on hand will make further acquisitions of independent, super premium functional beverage brands a real possibility in the near future.

The company’s other flagship, eponymous brand – Snapple brand iced tea – has faced pressure within the growing US category from Gold Peak and Honest Tea (Coca-Cola Co), Lipton Pure Leaf (PepsiCo), as well as longstanding value-priced leader Arizona tea. The Snapple brand has lost share in the category since 2009. In the second quarter of 2015, however, Snapple saw 8% year-to-date volume growth, after a 2015 refresh of the brand involving new packaging and a slight redesign of the logo. The company will be looking to extend this momentum into the third quarter, aiming to gain share back in the promising iced tea category.

Mott’s, the company’s brand of apple and other juice products, struggled in the first half of the year while the Clamato brand has enjoyed high single-digit growth in the US, thanks largely to activation efforts with the Hispanic US demographic, where the brand is most recognised and popular. Clamato has a longstanding partnership with AB Inbev’s Bud Light beer brand to market RTD Chelada, an alcoholic beer/juice mix. More recently, DPS has focused on promoting the use of the flavoured juice in home food recipes and a variety of less traditional mixed drinks.

Dr Pepper Snapple remains primarily a North American company, with the bulk of sales emerging from the high per capita consumption Southern and Midwestern regions of the US. The company’s lack of emerging market presence has posed an obstacle over the past decade, while rivals seize opportunities in higher growth markets, but this absence has also shielded the company from currency volatility and the recent emerging market slowdown. DPS’s most important international business remains Mexico, which has been an engine of growth in carbonates, but has faced its own uncertainty after the imposition of a sugar tax in January 2014. According to full year reporting (February 2015), the company “did a lot better” than expected, despite price increases on full-sugar beverages in the portfolio. Yet in the third quarter, rival Coca-Cola FEMSA reported a volume decline of 0.3% in its sparkling portfolio after a sharp 6.4% drop in the previous quarter. It will be interesting to note whether DPS continues to outperform rivals in its most important international market outside the US and Canada. 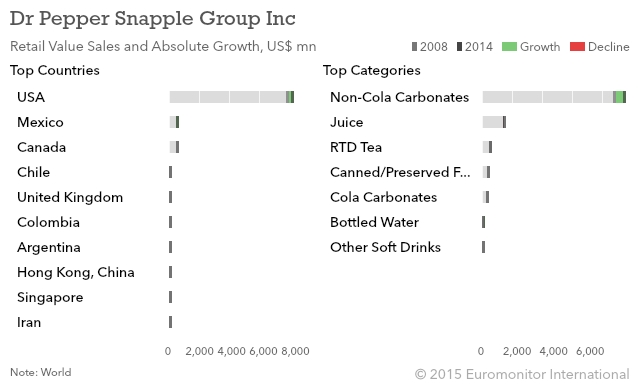 Asia Pacific is the key region for RTD coffee globally, accounting for nearly 80% of global sales. Much of this is due to Japan, with sales of USD11 billion.…