Autonomous delivery vehicles (robots) have taken to the streets and skies in recent trials as major delivery influencers attempt to push the boundaries of what technology can do to improve the delivery experience, and challenge the established foodservice delivery order. Though still in test-mode, simply put, drones could deliver a meal from the point of preparation straight to the consumer’s door without human intervention. Drones leverage a variety of advanced technologies, such as GPS, computer imagery and collision avoidance technology, to navigate even dense urban environments.

In a perfect delivery world in which drone technology was feasible, and the right legislation was in place, drones could shorten delivery times, expand coverage zones and offset high-volume orders during peak hours. Perhaps most importantly, drones could offset operational costs, and those savings could be passed on to the consumer, making delivery a cheaper and even more attractive channel to a wider segment of consumers. Legislation will be a hurdle, and the technology needs tweaking, but it seems clear that drones are coming, and this could be good for consumers.

Drones are just the most recent iteration of a larger trend in foodservice automation. Technology is being integrated into all aspects of foodservice, making operational processes more efficient and less costly. Technology is improving “back-of-house” operations, and is being used to engage consumers through mobile apps, self-service kiosks and modern payment terminals. Technology has had a large impact on delivery as well. Third party delivery aggregators have used digital channels, mainly through mobile apps, to make the experience of choosing a cuisine type, comparing prices, placing the order and making payment more seamless.

Most of the technology applied so far to foodservice delivery has been software-related. Drones, on the other hand, are a new injection of high-tech hardware that could have a major impact on the “cost factor”. Operating drones is expected to be cheaper and more efficient than traditional deliverymechanisms. If a delivery company can use drones to offset operational costs, then, like other automated processes in foodservice, those savings could be passed on to the consumer. This might make delivery more cost-effective for more consumers, and delivery could be an even greater driver of foodservice sales than it already is.

That’s the long-term goal, anyway, and certain early adopters hope to be a part of that wave of change. Just Eat, the third party delivery aggregator in the UK, successfully test-trialled its first delivery by robot in early December in London. The company partnered with technology firm Starship Technologies to develop a land-based robot (pictured below), on wheels, that could successfully navigate London’s cobbled streets and bring takeout to a customer without human intervention. 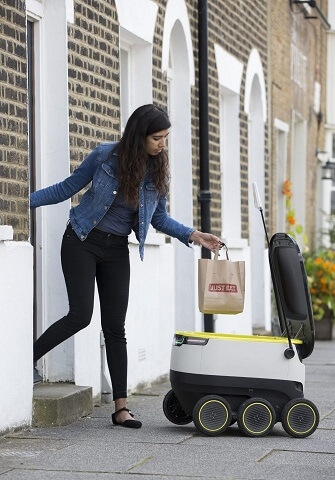 Domino’s Pizza, the tech-friendly pizza chain, has test-trialled its own land-based drone, DRU (Domino’s Robotic Unit), with similar ambitions, though it would deliver its own in-house products. Domino’s has also partnered with Flirtey, a San Francisco-based tech start-up specialising in drones, to experiment with aerial delivery. In a recent test trial, the company delivered a pizza by aerial drone in New Zealand, albeit in a rural area under tightly controlled conditions.

In order to maximise coverage, operators could benefit from both types of drones. While it might not be cost effective to deliver to far-flung rural households, for example, it might be feasible to send an aerial drone to complete that task. Similarly, land-based drones might be more suitable for urban environments, where delivery distances are shorter, and skies admittedly more hazardous.

Regulators will likely be slow to adopt legislation that will both embrace drones and keep pace with which the technology is developing. The technology also needs improving, though Amazon, the US-based e-commerce giant, is investing heavily in drones to not only improve delivery routes between distribution points, but also to offer delivery to the consumer, by aerial drone, from smaller neighbourhood distribution centres within hours of ordering. Given Amazon’s financial might and general enthusiasm, it seems reasonable to think the technology will improve quickly, and inspire other companies to follow suit.

Once drones do become more widespread and the cost of delivery falls, new opportunities are likely to emerge that have the potential to shift the dynamics of modern foodservice in three specific and distinct ways:

Beyond the hype and the forward-leaning technological repercussions, drones, on a more fundamental foodservice level, will need to improve the consumer experience in order to be viable. There are now so many other delivery models tightening the screws on various aspects of the experience, by reducing delivery times, improving food quality with innovative packaging or by making mobile ordering more user-friendly, in order to compete for market share. If drones can improve the delivery experience and make it more affordable at the same time, they have the potential to really change the game.

While Latin America has been recording strong growth in the last two years, booking sales are still below pre-pandemic levels, given the size of the losses seen…