Coronavirus (COVID-19) has accelerated the online presence and integration of digital solutions, reducing physical human contact. The internet has played an unprecedented role in daily lives during the pandemic and is projected to further fuel demand for innovations and internet-based technologies. With an abundant pool of IT and tech graduates, well-developed digital landscape and relatively competitive wages, Eastern Europe is being eyed by potential investors as the next Silicon Valley. How can Poland secure its leading position in the region and face the challenges that lie ahead on the way to becoming a future tech hub?

The largely post-communist Eastern European region has achieved major economic improvements over the past couple of decades. Generous funding from the EU such as the Structural and Cohesion Fund has allowed new member states including Poland, the Czech Republic, Lithuania, Latvia and Estonia to greatly improve their social, transport and communications infrastructure as well as to invest in advanced higher education programmes. Moreover, membership to the EU and reforms implemented on the way to becoming members fostered institutional improvements, allowing the development of a more attractive business environment. 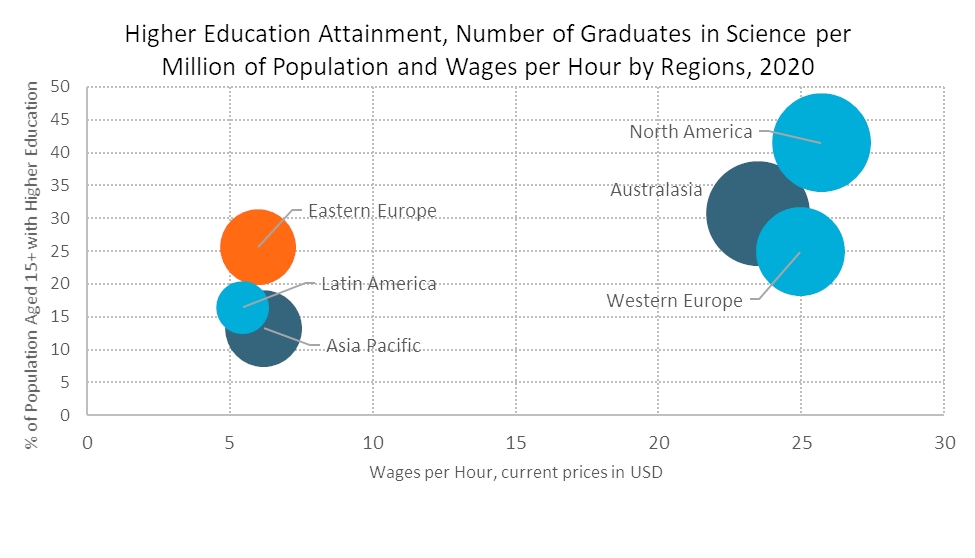 Source: Euromonitor International from national statistics/UN/Eurostat/OECD/UNESCO/
International Labour Organisation (ILO)
Note: Size of the bubble represents number of graduates in science ISCED97 Classification 4 per million of region's population in 2021 (from 377 to 1,461)

Warsaw boasts the second highest labour productivity levels (as measured in USD per person employed in constant prices) among Eastern European cities in 2020, surpassed only by Bratislava. While labour productivity in the Polish capital grew by nearly 20% over 2015-2020, hourly wages ranked eighth out of 20 of the largest Eastern European cities, drawing investors’ attention with a slightly cheaper labour force. In fact, over 2016-2021, employment in various business services increased by 87% to a total of 33,000 workers, 88% of which works in foreign capital companies, according to the head coordinator for entrepreneurship and social dialogue for Warsaw. Large global enterprises choose to outsource their business, IT, research and development and shared services to Warsaw. The city has attracted major foreign direct investments from British, Danish, Swedish, Swiss, German and US companies, among which Bayer, which opened a digital hub in Warsaw in 2021, and Moderna, which announced plans to establish a new international business services hub in Polish capital, are the most notable.

The Polish government has recently taken over public media channels, security services, the public prosecutor, and made changes to the constitutional court. The government’s refusal to implement the EU’s demands to reform the judiciary, which is becoming increasingly influenced by the state, has prompted Brussels to begin legal proceedings against Warsaw by referring the matter to the European Court of Justice in March 2021. Ongoing political tensions between Poland and the EU are adding to its unstable political situation, worsening the business environment. As a result of the potential loss of an independent judiciary, Poland has seen its ranking in the Corruption Perceptions Index deteriorate over 2015-2020. This is also due to less adherence to the rule of law and the undermining of democracy through increased state control that could create a breeding ground for increased corrupt practices.

In response to the COVID-19 pandemic, the government introduced comprehensive economic stimulus measures, which amounted to PLN290 billion (USD70.7 billion) in 2020, leading to an expanding budget deficit. Support measures included increased healthcare spending, wage subsidies for employees, liquidity loans, subsidies for enterprises, and postponement or cancellation of social insurance contributions. This led to a marked deterioration in the budget deficit in 2020. At the same time, the public-debt-to-GDP ratio surged over 2020, leading to a worsening position on the Government Spending pillar in the Index of Economic Freedom. While Poland’s public debt so far remains sustainable and, therefore, the government has space to provide additional fiscal stimulus in 2021 to mitigate the adverse effects of subdued global and domestic demand, future state budgets will see the need to comply with EU fiscal rules and limit public debt and deficit. 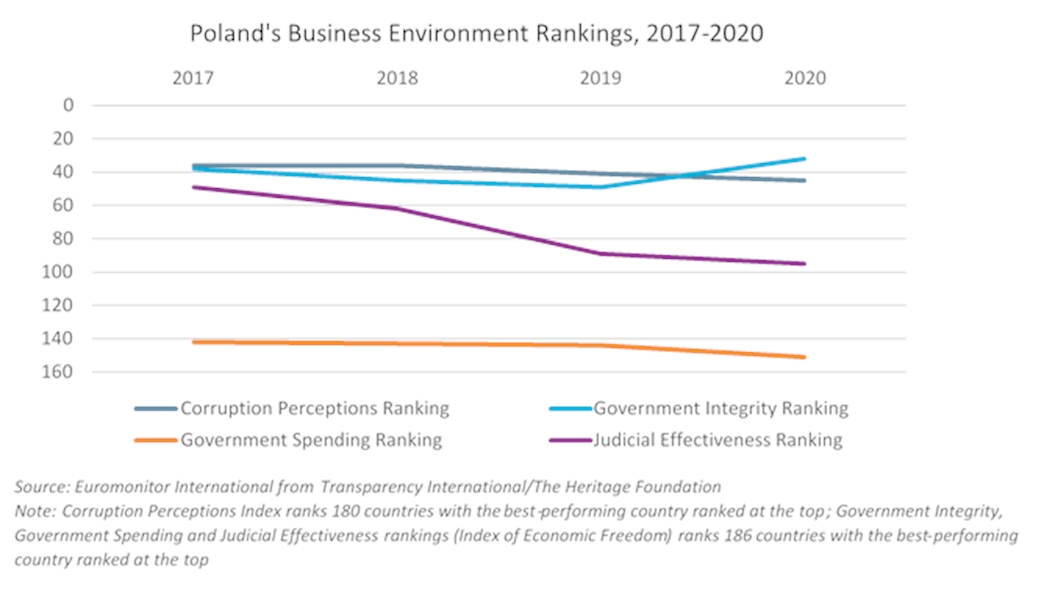 Poland’s ICT infrastructure, according to the Global Innovation Index (GII) 2021, has recorded major progress over 2015-2021, due to improved ICT access and use, better government online services and e-participation. Moreover, Poland has improved its stance on the Business Sophistication and Knowledge and Technology Output pillars of GII, pointing to improving business investments in knowledge creation and worker skillset development. Total intramural expenditure on R&D (GERD) performed by businesses increased from 0.4% of GDP in 2015 to 0.8% in 2021. Moreover, as of 2021, 53.2% of GERD in Poland was financed by businesses, compared to 37.3% in 2015. 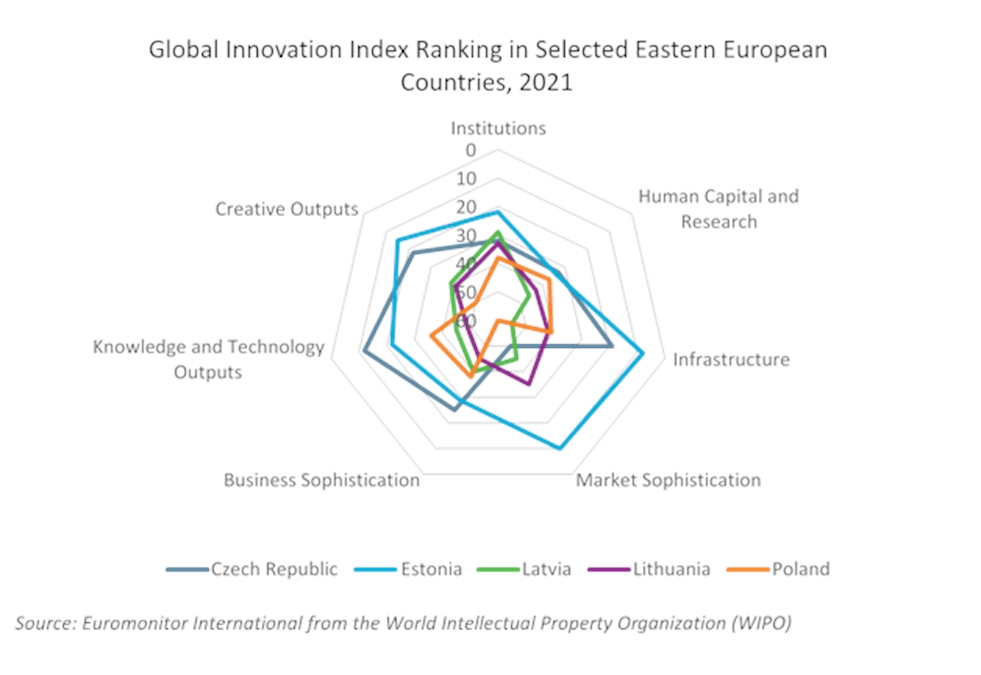 In the Network Readiness Ranking 2020, Poland excelled in the Technology and Governance pillars, showing strong ability to regulate the market as well as having the necessary technology. While the telecommunications sector sees rising investments, Poland needs to excel in the education of new IT professionals to be able to support growing demand for high-skilled labour in tech sectors. The country holds one of the lowest scores in terms of skillset of graduates, and ease of finding skilled employees, according to GCI.