The relationship between income and life expectancy has been demonstrated by a number of statistical studies. The so-called Preston curve, for example, indicates that individuals born in wealthier countries, on average, can expect to live longer than those born in poor countries [1]. It is not the aggregate growth in income, however, that matters most, but the reduction in poverty.  This article explores how the connection between per capita GDP and life expectancy weakens after reaching a certain level, and looks at examples where income gains did not translate into life expectancy improvements. 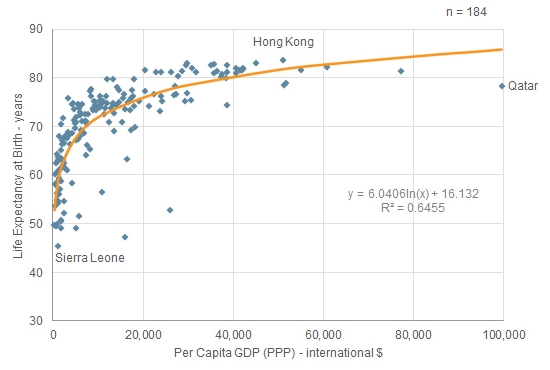 The most obvious explanation behind the connection between life expectancy and income is the effect of food supply on mortality. Historically, there have been statistically convincing parallels between prices of food and mortality [2]. Higher income also implies better access to housing, education, health services and other items which tend to lead to improved health, lower rates of mortality and higher life expectancy. It is not surprising, therefore, that aggregate income has been a pretty good predictor of life expectancy historically.

If we look at the world today, however, the relationship between income and life expectancy begins to weaken once income reaches a certain level. This is well illustrated in the developed countries example in Figure 2. The Preston curve for developed countries (IMF definition) is much leaner compared to that of total number of countries.

In 2012, a child born in Hong Kong could expect to live for 83.6 years, the longest in the world. The next countries in the longevity list were Italy, Switzerland, Japan and France, all of which have a rather significant variation in income. One of the biggest outliers among developed countries was the US – high per capita GDP but rather low life expectancy. The three Eastern European countries – the Czech Republic, Slovakia and Estonia – recent entrants to the developed countries list, have comparably lower incomes and also lower life expectancy. 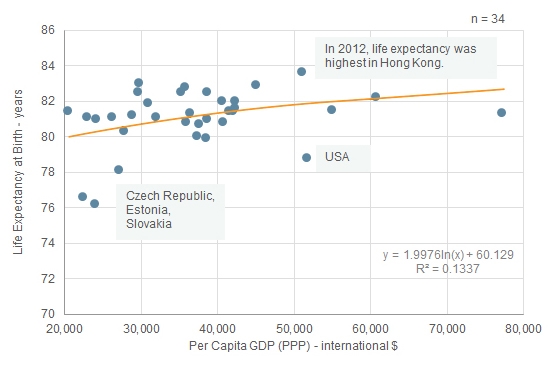 Higher Income Does not Always Lead to Higher Life Expectancy

Most importantly, income is not the only criteria, and a number of countries that are wealthy but not industrialised are not included in the list. Many mineral resource-rich economies, for example, have a high per capita GDP, often far exceeding the standard US$20,000 threshold for a country to be considered as ‘developed’, but are not considered developed countries because of export diversification criteria. So the list of developed countries already includes a number of assumptions that do not allow for objective comparison of income and life expectancy.

Instead, we may look at specific income bands and life expectancy. Using Passport, we took data for 47 countries where per capita GDP in PPP terms exceeds US$20,000, US$ 30,000 and US$40,000 and plotted this against life expectancy. The first takeaway, is that countries with income above US$20,000 (a threshold for developed country) have a much steeper curve than the list of developed countries, so the Preston curve is more relevant when we look at all countries (see Figure 3).

Figure 3: For the Wealthiest Countries, Income-Life Expectancy Relationship is Inverse 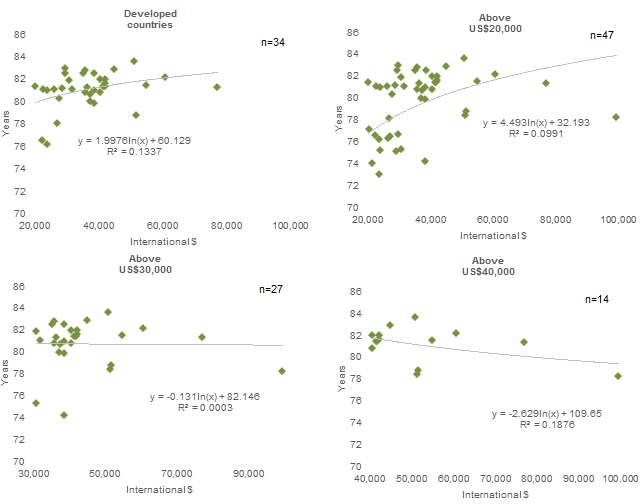 Pros and Cons of Income Growth

A number of reasons may explain the peculiarities of the income and life expectancy trends. The first, largely mathematical explanation refers to income inequality. Although higher average income can contribute to improved uniform access to certain necessities that tend to improve health, this is by no means a given. Some countries, like Qatar and Kuwait, have very high GDP but also a large expat population and significant income inequality. Increases in per capita income occur mainly as a result of more wealth being accumulated in the top percentile of society which already enjoys high living standards and longevity, and as such the real effect on the country’s life expectancy would be negligible [3]. Secondly, higher income also correlates with a number of unhealthy habits, such as tobacco and alcohol consumption and less healthy diets, which in turn leads to weakening health.

Average life expectancy in South Africa, for example, dropped from 62 to 51 years over 1992-2005 despite the fact that per capita GDP grew almost seven-fold during that period. Similar trends were seen in several other African countries, which have a history of severe income inequality, making them highly susceptible to the spread of HIV because of general neglect of public health care systems.

Figure 4: Life Expectancy Declined in South Africa Over 1980-2012 Despite Rise in GDP Per Capita 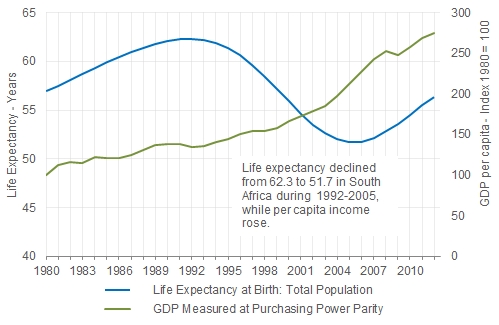 In 1990, people in South Africa, despite their much higher level of income, had substantially less chance of reaching old age than people in China, Sri Lanka, The Dominican Republic or Colombia. A number of other outliers also exist. In 2012, Slovakia had lower life expectancy than much poorer Dominica. Similarly, and rather interestingly, Cuba, despite its relatively low GDP per capita, had a similar level of life expectancy to the US.

Of course, this does not imply that economic growth is unimportant in boosting life expectancy. It appears, however, that its significance lies in the way that benefits are distributed between people, rather than growth of average income per se. Hence, in emerging economies in particular, it is not growth in aggregate incomes that matters but a reduction in poverty. Economic growth has the biggest impact if it is used to finance suitable social services, such as the public provision of clean drinking water, sanitation, health care, epidemiological protection and basic education. Other fundamental factors that lead to an improvement in life expectancy include better nutrition, social security, political stability and a reduction in violence, as can be seen in the correlations table below.

Expenditure on health was also a lot more important in emerging economies, where existing healthcare facilities are so basic that every extra dollar poured into the sector can have a sizeable effect. Certain infectious and parasitic diseases and diseases of the respiratory system in particular require government attention in order to be controlled and/or eradicated. Infants and small children tend to be very vulnerable to such diseases, and the infant mortality rate correlates especially strongly with overall life expectancy in developing markets.

Finally, political stability, control of corruption and absence of violence correlated more with life expectancy in emerging countries than in developed nations.

Meanwhile, in today’s developed countries, the negative side effects of income growth – namely its detrimental impact on health after personal affluence reaches a certain level – can partially outweigh wealth-facilitated improvements. Physical inertia, increased consumption of automobiles, alcohol, tobacco, sugar and animal fats are all features of Western society today, mainly because high per capita income has made such consumption possible. In particular, smoking, alcohol consumption and obesity are the major risk factors with biological effects on health and demographic patterns.[5] Studies have shown that on average smokers experience a higher mortality rate than their similarly aged non-smoking counterparts[6], while the obese, especially the morbidly obese, experience much greater risk of mortality from cardiovascular disease[3] and ischemic stroke[4].

To What Extent Can Income Explain Life Expectancy Trends?

In this context, average income fails to act as a representative health indicator, and rich nations can actually perform worse on a number of health indicators compared to relatively poor economies. Preston, for example, having modelled the relative contribution of economic factors to increases in life expectancy during the 20th century, concluded that factors exogenous to a country’s current level of income could account for up to 90% of the growth in life expectancy between the 1930s and the 1960s. Income growth per se accounts for only 10-25% [8]. Further research from Anand and Ravallion revealed that the connection between GNP per capita and life expectancy tends to vanish when we exclude incomes specifically of the poor and public expenditure specifically on healthcare.

It could be argued that in emerging and developing countries, where labour tends to be very cheap, it makes sense to invest in labour-intensive services such as sanitation and healthcare as their net cost to society is actually very low, and gains can be substantial.[1] Meanwhile, fighting obesity and smoking – two increasingly pressing issues in the developed world – could add more healthy years to life expectancy averages in today’s rich countries.

Note: In the article income refers to disposable income per capita, and is used interchangeably with GDP per capita. The two measures correlate very closely and are a  good proxy for each other, but GDP data is available for more countries.

1. Following the empirical work of Preston (1975), who plotted life expectancy against income per capita for a cross section of countries for the 1900s, 1930s and the 1960s and found that the relationship held for each of the three decades.

8.  Preston, “The Changing Relation between Mortality and Level of Economic Development”, 486.