After undergoing a tumultuous period that resulted in the country entering recession in 2009— for the first time in 16 years, quarter one in 2014 saw Spain finally claw its way out of recession, posting a real GDP growth rate of 0.6%. Thanks to a reviving employment market which has helped raise incomes and spike an appetite for consumption, all tier one and tier two Spanish cities analysed by Euromonitor International, including the two largest, Madrid and Barcelona, managed to post above-Eurozone average real GDP growth rates in 2014 and 2015. Yet forecasts by Euromonitor suggest that economic growth is set to slow down over 2016-2020, largely due to political uncertainty regarding the Brexit vote, as well as the expected underperformance of Eurozone and emerging market economies.

Real GDP growth and forecast across Spain, key Spanish cities and the Eurozone: 2005-2020 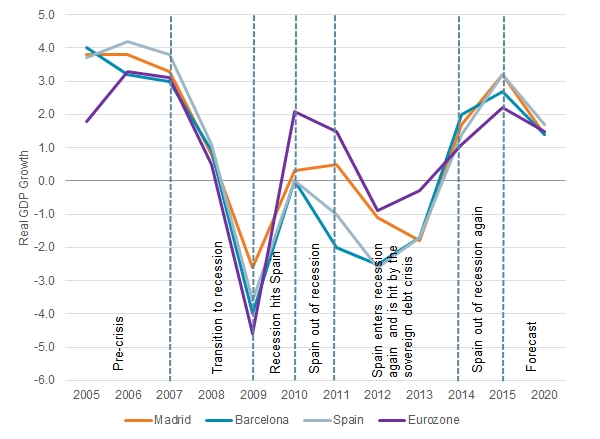 Revival of the employment market

The reinvigorated employment market has played a key role in propelling the growth of key Spanish cities. In Barcelona for instance, the unemployment rate amongst the economically active population fell to 19.5% in 2015, down from 23% in 2013, though this was still over three times greater compared to the pre-crisis level of 6.2% in 2007. Despite construction and manufacturing still reeling, other sectors such as business services and public services helped advance the city’s labour market, adding respectively 13,000 and 11,000 jobs between 2014 and 2015. In Madrid— the country’s economic, financial and commercial centre, a similar story emerges, with business services, commerce and manufacturing being the prime contributors to the city’s overall employment market. What is more, Spain’s capital city recorded one of the best rates of growth in labour productivity over 2010-2015 (a measure of economic efficiency) with GVA per employee in constant value terms advancing up by 8.6%— among the best in Western Europe.

Consumption rising whilst the real estate market is recovering

The encouraging performance of the labour market has provided city inhabitants with rising disposable incomes, which, in turn, has rejuvenated the consumer expenditure market in cities across the country. In Madrid for example, between 2014 and 2015, disposable incomes rose by 1.6% in real terms compared to just a 0.8% rise across the Eurozone. Consumption across the vast majority of Spanish cities has mainly been directed towards education, communications and housing, though other categories such as clothing and footwear and household goods and services have been slower to pick-up.

The real estate segment, which for seven consecutive years saw declines in the country, finally broke the deadlock and recorded marginal growth in 2015. Property prices have risen in key cities of the country thanks to rising domestic and overseas demand, relaxed mortgage lending conditions and lower borrowing costs. According to the real estate consultants CBRE, since 2014, prime rents in the office market have followed an upward trend both in Barcelona and Madrid whilst vacancies have fallen. For example in Barcelona, CBRE is predicting a 10% rise in property prices over the year in 2016, however considering the Brexit vote, investment patterns are likely to change given the lower value of sterling. 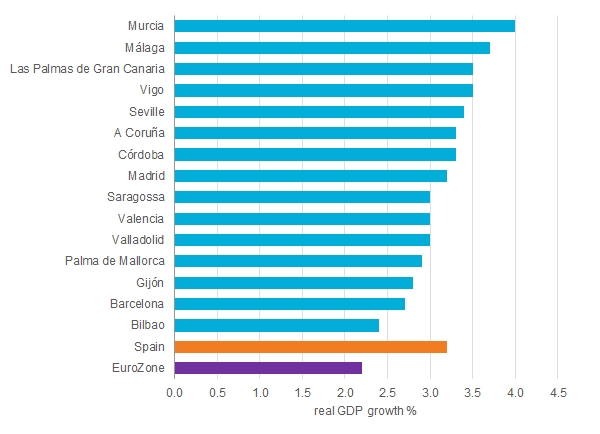 Unfortunately, in light of greater uncertainty, the economic inroads made by Spanish cities in the aftermath of the recession will likely be cut short. Brexit has thrown a spanner in the works with sterling’s value in mid-November 2016 still around 11% below levels prior to the referendum vote. The devalued sterling will likely suppress tourism from the UK— adversely impacting hospitality services such as hotels, restaurants and catering, especially in popular tourist hotspots, namely Barcelona, Las Palmas de Gran Canaria and Palma de Mallorca. An expected slowdown in the real estate market is also predicted amid sterling’s devaluation, whilst a tightening of the national budget to meet the fiscal reduction deficit target of 1.5% in 2017, weak Eurozone and emerging market growth will further inhibit economic performance across Spanish cities in the near future.