Euromonitor International’s Ireland Economy, Finance and Trade Country Briefing, focuses on one of the world’s most attractive investment destinations, offering an extremely favourable tax regime. This makes Ireland very appealing to foreign firms, resulting in extremely large FDI inflows, particularly from the US and UK. According to IBM’s 2016 Global Locations Trend’s report, Ireland continued to lead the world in alluring high-value foreign direct investment (FDI) projects in 2015. Although Ireland’s real GDP growth moderated in 2016, it still stood as one of the highest in the EU, indicating that the Irish economy continues to perform well, driven by solid exports and favourable domestic conditions. However, Trump’s surprising victory in the US elections, coupled with the UK’s unexpected decision to leave the EU, Brexit, signals higher risks hovering over Ireland, given the nation’s close trade and investment links with the two countries. Thus, Brexit and Trump’s extreme protectionist policies will have far reaching consequences for the Irish economy through disruptions in trade as well as investment profile. 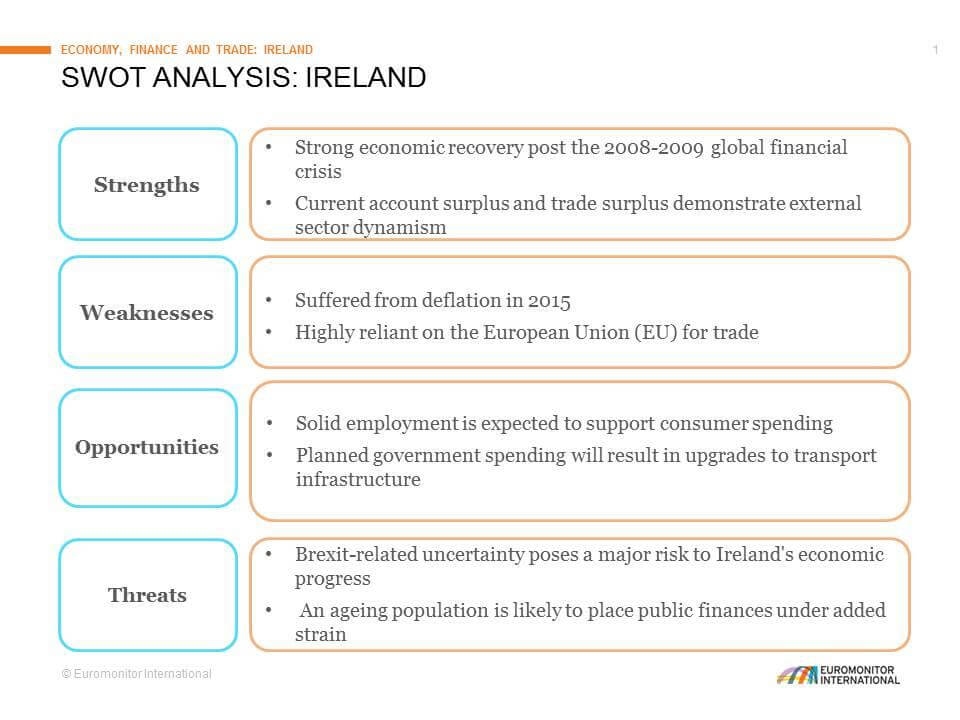 In 2016, Ireland exported 25.9% and 12.6% of its total goods to the US and UK, respectively, and 30.7% of Ireland’s total imports came from the UK and 12.9% from the US, highlighting a large trade dependence on both nations. As the UK prepares itself for Brexit, Euromonitor International’s baseline scenario expects the UK to trigger article 50 and negotiate a free trade agreement (FTA) with the EU, to reduce all tariff barriers to trade. However, there is a chance that disagreements between the two, owing to their different stance on immigration, will not result in the signing of any deals. Hence, the outcome of the UK’s negotiations with the EU will have a notable impact on Ireland’s trade profile. The harder the post-Brexit linked negotiations with the EU, the more it will hurt Ireland via higher trade related costs and reduced investment.

Along similar lines, living up to his anti-free trade stance, in January 2017, Trump withdrew the US from the Trans-Pacific Partnership (TPP) deal. This clearly signals a threat to the Transatlantic Tradeand Investment Partnership (TTIP), a sequence of trade pacts between the EU and the US that has been under negotiation since 2013, shattering Ireland’s expectations of profiting greatly from the deal.

Furthermore, Ireland has been successful in maintaining a low tax, highly skilled workforce and friendly business environment, luring numerous US conglomerates to set up their European headquarters in the country. This provides jobs to the locals as well as boosting public revenues. However, with Trump coming into power, Ireland fears losing out on large investments, particularly if Trump sticks to his promise of slashing the US corporate tax rate from 35.0% (at present) to only 15.0%, very close to Ireland’s 12.5%. Such a move could attract a bulk of US firms operating globally (including Ireland) back into the US, causing a blow to the Irish economy via lower employment opportunities, investment and public revenue. In addition, Trump’s plan for a tax pardon for multinational offshore earnings will jeopardise Ireland’s commercial strategy of drawing businesses seeking a low-tax entrance into the single market, EU.

On the other hand, Ireland can seek to benefit from Brexit, especially in financial services, as post Brexit negotiations bring uncertainty for businesses in London. However, this will not be enough to offset the higher negative effects from external risks. Hence, Ireland needs to brace itself for impacts of the troubled external economic and political scenario in the US and UK, especially with regards to trade and investment.