Euromonitor International’s Vietnam Economy, Finance and Trade Country Briefing, focuses on one of Southeast Asia’s most dynamic and fastest growing emerging markets. Low labour costs when compared to regional peers such as China and Thailand have supported the growth of Vietnam as a manufacturing base and a major electronics exporter in the region. Furthermore, Vietnam has a young population with a bourgeoning middle class and a populace of 93.4 million, which undoubtedly indicates an essential market for consumer goods. Vietnam has continued to maintain its position as one of the star performers in terms of economic growth boosted by strong growth in private consumption, continued rise in foreign investment and growth in exports. However, shortage of skilled labour, low productivity, corruption and rising wages are major challenges faced by businesses and the manufacturing sector, which the government needs to tackle to maintain Vietnam’s overall competitiveness and cement its position as Asia’s next manufacturing hub. 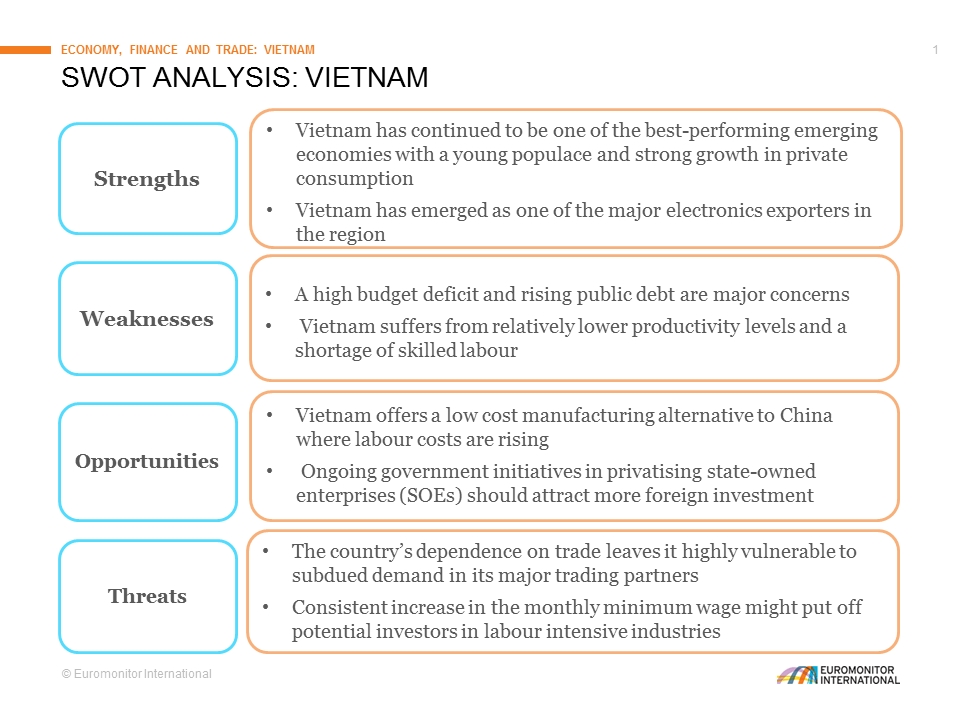 Vietnam offers a low cost manufacturing alternative to its regional peers where labour costs are rising:

Despite rapidly rising wages, Vietnam’s minimum wage per month remained the third lowest among ASEAN economies in 2015, below that of Thailand and Indonesia. Hence, over the years, Vietnam has experienced an increase in foreign direct investment (FDI) inflows especially in its labour intensive industries. Businesses with manufacturing hubs in China and Thailand are relocating to Vietnam. In 2015, LG Electronics moved its television production base from Thailand to Vietnam. Furthermore, the government has been taking numerous initiatives in enhancing Vietnam’s overall competitiveness; these include a gradual cut in corporate tax rates and reforming the state-owned enterprises (SOEs). Although the government failed to reach its ambitious target of equitizing 500 SOEs by 2015, it succeeded in privatising 94 SOEs between January and September 2015. The corporation tax rate was slashed from 28.0% in 2008 to 20.0% in 2016, which now stands lower than China and on par with Thailand and Cambodia. If the government continues to thrive in enhancing Vietnam’s business environment and help boost economic activity, the country has great potential in developing into Asia’s new manufacturing hub.