Etsy, the New York-based Internet retailer that specialises in handmade and vintage products (everything from old-school manual typewriters to trendy hand printed t-shirts), has filed plans to list on the stock market. It’s a big deal. The IPO could value Etsy as high as US$2 billion, and turn it into a major global e-commerce player. Currently, it still ranks outside the top 25 Internet retailers in the US, according to data from Euromonitor.

There are risks in turning a quirky ‘indie’ brand into a fully-fledged corporate one, though. Etsy is made up mostly of small-scale producers with staunchly artisanal principles. The business is not even profitable (see chart below). There is an argument that once Etsy becomes answerable to shareholders, it will need to distance itself from some of its core arts and crafts heritage. That, in turn, could jeopardise a key point of competitive differentiation from bigger e-commerce rivals, not least eBay and Amazon. 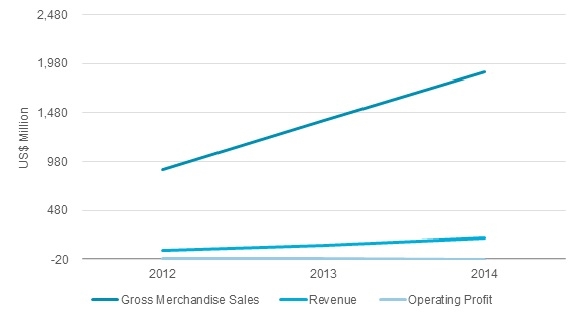 Profits are in decline

The Etsy business model is quite straightforward (and familiar). It operates as an online platform that connects buyers with sellers. Revenue comes from charging sellers US$0.20 per item listed and a further 3.5% commission on sales completed. There are also earnings from seller services, primarily advertising, payment processing and shipping labels. It has around 29 million items listed on its website.

But, there is a problem. The business is losing money despite sharp rises in gross merchandise sales (specifically, all transactions between buyers and sellers), which hit almost US$2 billion last year. In fact, net losses have been growing, and climbed to just over US$15 million in 2014.

Once Etsy goes public (it will be listed on Nasdaq), its profitability will need to shift back into the black. Investors will settle for little else. It is easy to see how slower rotation or more niche products could get edged out in favour of higher demand (or ‘trending’) products. Etsy could then start to look more and more like e-Bay or Amazon, albeit much smaller, and lose some its free-spirited commercial image in the process.

Etsy’s challenge, as a listed company, will be to come up with ways of growing the business without sacrificing its core principles. The website was founded ten years ago, and buyers love it for its eclectic nature and the quirkiness of many of its products. Sellers love it because they feel part of a friendly retail community where they are well looked after.

Etsy will need to nurture its community of buyers and sellers because therein lies its biggest strength. Its active buyers are loyal, and have a propensity to spend to boot. Indeed, spending per person is now close to US$100 (US$98 in 2014). While Etsy’s average revenue per buyer was equivalent to US$10 in 2014, which is on a par with Facebook’s average revenue per user. Facebook, of course, is the Internet’s frontrunner when it comes to user loyalty.

The crucial point is that if Etsy is going to prosper it will have to keep its traditional community happy. That means retaining its more unusual or one-off items even if they subdue profitability. Equally, the IPO ought to help Etsy put its operating financials in order, making them more effective (and less wasteful).

The added challenge will be in growing the community but without losing its sense of intimacy and personal engagement. In the last two years, the number of active buyers has already more than doubled while the number of sellers increased 63% (see charts below).

Yet, keeping things intimate could end up being counter intuitive if the company’s plan to beef up marketing pays off. In the end, there is a risk the website might simply grow too big for its own good. 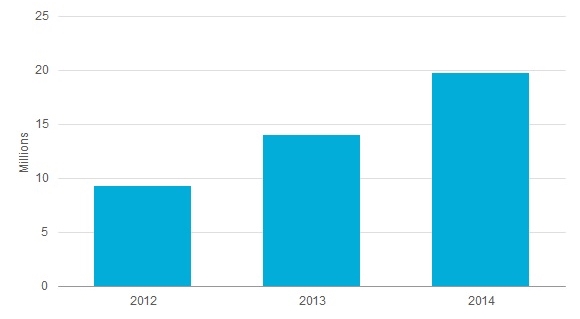 Note:  Active buyer is buyer who has purchased in the last 12 months 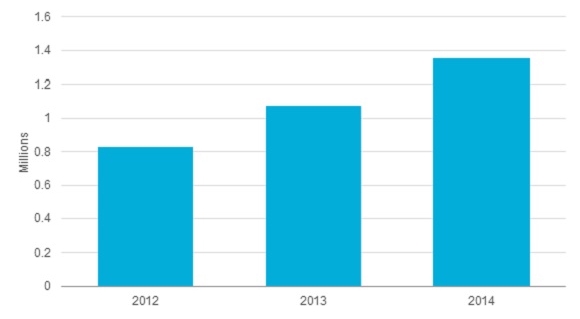 Note:  An active seller is someone who has incurred a charge from Etsy in the last 12 months

Etsy has vast untapped potential, but staying true to its heritage will be tough

More than a third of purchases made on Etsy are done using smartphones or tablets, so the brand is right at the front of the m-commerce fashion. In its pitch to investors (from the S1), Etsy says it plans to drive up its mobile investment and make Etsy an everyday habit. This is a wise decision, especially as the company grows its international business where m-commerce is taking off quickly.

Last year, 29% of Etsy sellers were located outside the US (after the US, its key markets are currently Australia, the UK and Canada). But, that non-US share has potential to rise significantly following the proposed IPO.

Higher profile marketing combined with improved seller services will also be key targets of new investment. Currently, seller services fuel around 42% of revenue, but this is also where Etsy is leaking some of its profitability. It is an area that will need more effective administration post-IPO.

Overall, the company’s pitch in its S1 filing is a strong one – particularly the plans to build stronger local communities and cross-border trade. It is worth pointing out too that Etsy is not necessarily confined to online commerce. In the past, it has opened pop-up stores, for example. And, with new injections of capital, further bridges between online and offline retailing could come into play.

The wider picture is that Etsy could even end up becoming an attractive acquisition target for the Internet giants like eBay, Amazon, Pinterest or even Facebook, at least over the short-term while it is still relatively small. But again, for that to happen, Etsy will need to hold firm to its roots. Its indie quirkiness is at the heart of its cachet, and is ultimately the key to its market value. Without it, the company could lose its community—and its appeal.

Learn more in Top Retailing Trends in the Americas 2015