Excising non-alcoholic beer – sounds irrational? Well, not according to the Russian government, which is considering slapping excise charges on this product, which could, in turn, call into question its future development.

Not only does it sound illogical to levy alcohol excise on a non-alcoholic drink, apart from the word “beer” in the product name, but it also hasn’t been seen in any other country, making it an unprecedented example globally in terms of non-alcoholic beer.

Over the last five years, in light of the constantly declining overall beer market in Russia, non-alcoholic beer was close to stagnation, albeit with a still slightly positive development, despite continuing economic turmoil in the country. The highly niche nature of the product – accounting for a 2% volume share of the total beer market – as well as the specific consumer perception of it relative to traditional beer makes charging excise on this product a potentially suicidal initiative.

The planned RUB21 per litre (roughly 20% of the current non-alcoholic beer price) excise levy is proposed to generate higher tax revenues for the regional budgets where manufacturing is situated. Let’s just imagine that this tax would not affect volume sales of non-alcoholic beer – in which case it would generate approximately EUR50 million in additional revenues, which is a drop in the ocean compared to alternative potential gains from excise levies. On the other hand, with a much greater likelihood that such an initiative would result in a price increase, followed by declining demand due to the high price sensitivity of consumers in the current crisis situation, this could ultimately kill off the category. Instead of increasing revenue takes, regional budgets would therefore be likely to fall short in terms of tax levies.

Another idea behind the tax, not so obvious at first sight, is related to the advertising of non-alcoholic beer. This type of beer is allowed to be advertised and the biggest breweries use that a lot, thus creating a halo effect – by promoting a non-alcoholic beer brand they also promote alcoholic alternatives under the same brand name, which are not allowed to be advertised. Excising the category might lead to a decrease in its sales and potentially have a negative effect on advertising, hence, affecting brand awareness of alcohol containing alternatives under same brand name.

The largest Russian brewers together with the Russian Brewers Association have expressed doubts about the effects of the potential tax and already addressed a letter to the Ministry of Finance asking for it not to implement the idea. For Russia, which is notoriously famous for high alcohol consumption, the new excise not only contradicts the policy of dealcoholising the nation, but also has strongly questionable monetary benefits.

The idea of raising taxes to patch up budget holes in the wake of economic crises is not new – unfortunately, however, this practice, seen as the easiest way to generate additional funds, has been shown to diverge from economic reality, especially against a backdrop of economic downturn, when consumers are at their most sensitive to price changes. 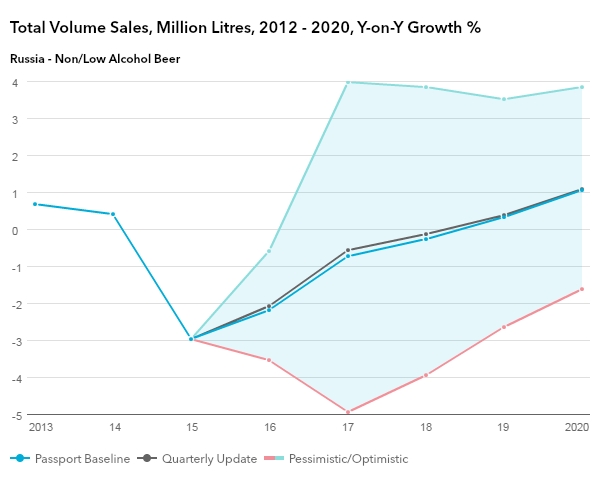 Referring to the above graph we can see that the Euromonitor International alcoholic drinks industry forecast model already predefines a relatively uncertain future, though it does not include the recent “non-alcoholic beer excise” variable. If this were to happen, the market might end up even lower than the already pessimistic expectations.

It is not yet clear when the new tax might come into force, although it looks like this is not a yes/no question, but rather a question of time. According to the latest reports, it seems that the Russian Ministry of Finance took into consideration the response of the biggest brewers and the Brewers Association and has announced that excise on non-alcoholic beer will not be considered right away – although it will return to discussing it after it has introduced a tax on sugar beverages. Which is, in itself, another tale of questionable crisis budget planning.