AB InBev’s proposed takeover of SABMiller, seen as a “megabrew” in the beverage industry, will not have a huge immediate impact on mainstream global brand owners such as The Coca-Cola Company and PepsiCo in terms of market share as the brewers own a limited number of soft drinks products, and a handful of brands with some shares in global carbonates, namely AB InBev’s Antarctica and Sukita, and SAMiller’s Pony Malta and Appletiser. Antarctica is a popular brand in Brazil and also has shares in Denmark and Portugal. The other three are minor brands with very limited geographical coverage. 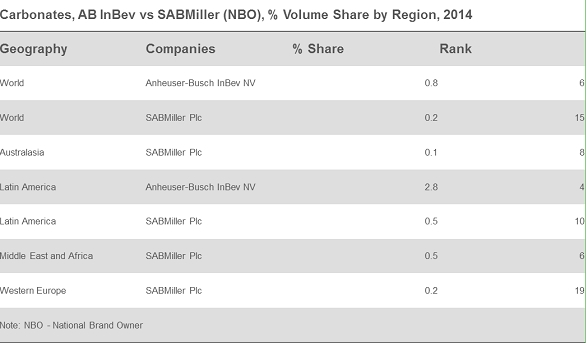 However, the merged entity is likely to have a compelling geographical coverage in terms of production and distribution (see table). AB InBev, notably, will effectively have access to Africa –a region with vast potential for soft drinks. The Middle East and Africa is expected to see the largest absolute off-trade volume increase (around 7 billion litres) in 2014-2019, compared to Asia Pacific’s 4.8 billion litres. SAMBiller is already a bottling partner with The Coca-Cola Company in large parts of Africa and its local knowledge and existing logistics will be very valuable for AB Inbev.

AB InBev expects to extract US$1.4 billion annually in synergies from the combination after four years. The new entity will see integration, restructure and all the aftermath of merger. This could potentially enhance AB InBev’s financial position and economy of scale. As a bottler, AB InBev is likely to take over SABMiller's estimated 5% share of Coca-Cola volumes; meanwhile, it is waiting for the approval of the creation of Coca-Cola Beverages Africa, which will be made up of bottling operations in 12 markets across Southern and East Africa. AB InBev is already a bottler for PepsiCo across Latin America. 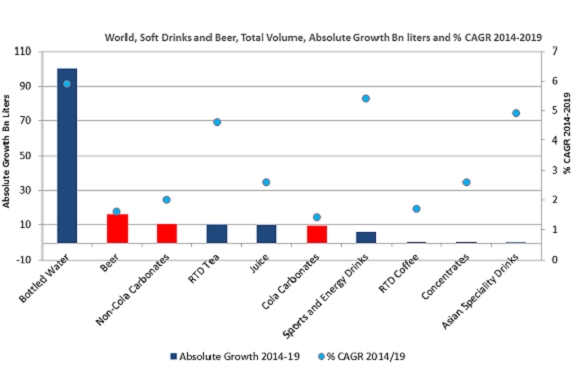 Despite the potentially enlarged capacity and acquisition of territories, the new entity will still have to face the challenge of slow growth in beer globally (see chart). Increasing popularity of craft beer represents another layer of threat. Some analysts suggest that expansion into the soft drinks industry by large scale is the only way forward for the new entity and setting sights on Coca-Cola cannot be ruled out in the medium term. Euromonitor International’s Senior Alcoholic Drinks Analyst, Jeremy Cunnington commented that “beer and soft drinks bottling share many common practices in terms of distribution, bottling and production. It is a natural progression for AB Inbev to bid for Coca-Cola in the medium term, when things settle. In the short term, both players would have to spend a lot of resources in creating synergies and integration between them.”

Indeed, The Coca-Cola Company is seeing continuous decline and sluggishness in its core area of carbonates. There has been no ground-breaking innovation to drive demand and consumption. No Nespresso-style frenzy in the soft drinks industry was evident over the past decade. Although The Coca-Cola Company is the world’s number one in juice, RTD coffee (mainly in Japan) and also holds prominent positions in bottled water, RTD tea (mainly in Japan and the US) and sports and energy drinks (its new equity investment in Monster), thus far, over 70% of its off-trade volume still comes from carbonates globally.

The Coca-Cola Company appears to be in a dilemma: it can focus more resources to rescue or drive carbonates, or gradually “let cola go” and channel more resources into still drinks. The long-established institution may find itself at medium risk of being acquired if the current threat is not averted; moreover, this is not the first time such suggestions or rumours have proliferated. As The Coca-Cola Company’s CEO Mr Muhtar Kent is approaching retirement, it will be interesting to see his successor’s strategy and long-term vision for the iconic American brand. Meanwhile, the AB Inbev deal can safely go ahead, allowing the future entity to gather growth momentum for the next milestone, perhaps waiting for the right time to acquire Coca-Cola.

How is the Soft Drinks Industry Responding to the Challenges of Inflation?