3D printing only emerged in the mass market a few years back, but engineers and designers have actually been using large and expensive 3D printers for nearly three decades to make prototypes, most commonly in aerospace and automotive companies.

Over the years, with technological advancements and a maturing of software design, desktop-sized 3D printers have become more common and more accessible to start-up entrepreneurs. Despite having been used in the aviation industry for so many years, it was in March 2015 when the first GE (General Electric Company) 3D printed part for jet engines was produced for commercial use and approved by the FAA (Federal Aviation Administration).

3D printed technologies are being adopted in the eyewear industry, but particularly among spectacle frame and sunglass manufacturers. Manufacturers are incorporating 3D printing to differentiate their products from those of their competitors.

Mykita was one of the first eyewear manufacturers to produce eyewear using 3D printing technology, under its Mylon collection. The company started exploring polyamide materials back in 2007, using SLS (Selective Laser Sintering) – each frame is customisable and can be adjusted to fit the individual consumer. The light weight and durability, combining with innovation and craftsmanship, won this collection several awards. 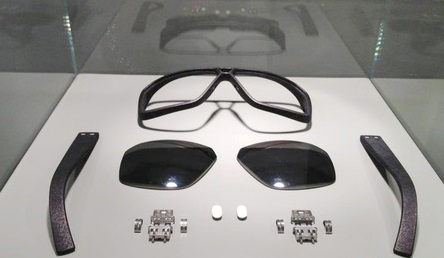 German eyewear manufacturer Ic! Berlin was another first-mover in 3D eyewear printing. The company launched an upgraded version of 3D printed eyewear collection "I See Exoskeleton". What is unique about its design is the fact that no hinges, brackets or nose pads were printed as part of the spectacle frame. This collection does not require screws or brackets to hold the front piece to the temple, which essentially forms a more seamless and smoother hinge than any other 3D printed frame.

The 3D printing technologies in these examples are mainly used as a marketing strategy to create uniqueness when compared with traditional frames and not to develop a new manufacturing process. This is because 3D printed eyewear is generally more costly and requires a longer turnaround time – and is therefore not as effective as traditional manufacturing processes when serving the mass market.

Despite the restrictions stated earlier, there are several online retailers in the industry exploring this manufacturing method. Many are exploring 3D printing trends, but most are failing to make it commercially viable on a sustainable basis. The more successful ones among them are Protos Eyewear and Boulton Eyewear.

Protos Eyewear’s 2014 project was successfully financed through crowdfunding. This online retailer allows consumers to purchase customised eyewear through 3D printing. Protos frames are made from bioplastic materials that are lighter than titanium and more flexible than acetate.

Increasingly, 3D printed customised eyewear is gaining more attention from both consumers and manufacturers. However, to own a suitable 3D printer for spectacles is still considered expensive – furthermore, the technology is not yet ready for mass production. I believe that 3D printing technology will not replace the existing manufacturing process for the time being, due to the longer waiting times required to manufacture a customised 3D printed spectacle frame. Nevertheless, manufacturers will continue to explore the possibilities and technology will continue to advance. One way of doing so is by incorporating 3D printing technology into the current eyewear offering.

Another challenge for optical 3D printing is that although 3D printing is technologically currently possible for frames, there are limited 3D printable ophthalmic lens options. While there has been research and development news on 3D printed spectacle lenses, it has yet to materialise into something achievable for commercial usage. With the speed of technology advancement, it may not be too long before these issues are ironed out, so that fully 3D printed functional eyewear could be available in the near future. This advancement will open up new customisation possibilities for the end consumer. 3D printing may prove to be a game-changer for the otherwise traditional optical industry.

The COVID-19 pandemic has changed oral care: from being an essential category, oral care is now seen as an extension to overall health and beauty. Value-added…