The world is an increasingly mobile place, with people criss-crossing the globe and living abroad in ever-greater numbers. However, the expat experience is changing – migrants are an increasingly heterogeneous group with a wide variety of goals and expectations.

International migration can be driven by career, lifestyle or family factors (or some combination of them) or by simple necessity (political or environmental instability, for example). It has been facilitated by greater freedom of movement (particularly within the enlarged European Union), cheaper air travel (enabling migrants to travel home more frequently) and technology (smartphones and apps like Whatsapp and Skype help to alleviate the pain of separation from loved ones). On the demand side, large employers are increasingly prepared to spread their recruitment net globally, while ageing population profiles mean that lower-paid workers are in relatively short supply in some developed countries.

In 2014, the largest recipients of migrants (in relative terms) were (in descending order) the city states of Singapore and Hong Kong, Australia, and Norway and Sweden in Scandinavia. Ireland was the largest source of migrants, followed by Romania. 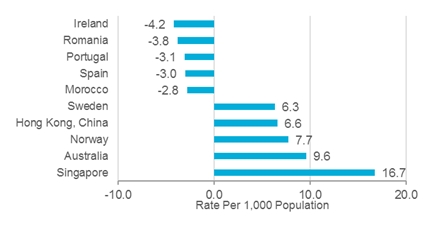 Mass emigration is a tradition that dates from the 19th century in Ireland. But the traffic is no longer just one way. While construction industry workers may have left Ireland in droves after the collapse of a housing market bubble, the presence of a significant number of blue-chip IT and financial-services companies in Dublin’s docklands is a magnet for expats. “If you are out for a meal at night [in the docklands], the Irish could be in a minority given the large number of foreign professionals now living and working in the area in financial services, law or high-tech companies", local auctioneer Own Reilly told the Irish Independent newspaper in March 2015.

Not always a bed of roses

Of course, not all migrants have good experiences. This is particularly the case for domestic and construction workers in the Middle East. Tales of passports being seized and wages withheld are widespread in this region, prompting complaints from governments as far away as Nepal and Indonesia.

An international survey of expats conducted during June 2014 by InterNations, an online community for people who live and work abroad, ranked Kuwait last in terms of quality of life among 61 countries. InterNations noted that “Expats in Kuwait do not think it is easy to settle down… Only 5% of survey participants feel completely at home there, and only 7% find it very easy to make local friends”. According to government data, there were 2.7 million expats residing in Kuwait during 2013 – accounting for well over half of the kingdom’s population.

Making sacrifices to build a future back home

Many migrants routinely send money to family members back home, providing a significant boost to local purchasing power. For example, per household remittance inflows stood at US$1,261 and US$1,316, in the Philippines and Portugal, respectively, during 2014. A portion of these transfers is often invested in bricks and mortar.

Many expats are prepared to make significant sacrifices to build a dream home for their later years. In 2013, website Theblacksea.eu reported on how migrants from rural Romania were helping to transform their home villages. “The money the residents earned in France has changed the face of traditional villages in northern Romania. Before, the villages were full of wooden houses… Now the area is packed with concrete mansions with stainless steel balconies and curved roofs”. “The elder migrants dream of one day returning home to enjoy their mansions”, it added.

Cotros, who moved to Paris almost 20 years ago and raised his family there, said: “The golden rule is never let go of your profit. If today you make €50, you set €40 aside. If you start indulging yourself, like going to bars and restaurants… you’re never going to make money. Never!” Similarly, his 28-year-old daughter Dana makes €2,500 a month as a housekeeper but saves €2,000 of this. Cotros, who has never learned to speak French, added: “It [Paris] still doesn’t feel like home, and it never will!”

A foot in both camps

Apart from those who move internationally, there are a growing number of affluent consumers who split their time between different countries and have a home in each. These part-time expats include 50- and 60-something Northern European sunbirds who spend winter in their Spanish holiday homes, and affluent Chinese, Russian or Middle Eastern consumers who want a pied-à-terre in a major global city. Such has been the influx of wealthy Russians into London over recent years that some have dubbed the city ‘Londongrad’.

Some want their children to be educated abroad, while others are after a comfortable bolt hole in case the economic or political situation deteriorates at home. Many are big spenders: In December 2014, the Hollywood Reporter newspaper reported that Saudis had become major players in the property market in the ultra-affluent Los Angeles suburb of Beverly Hills. It added that “super-rich Saudis and Chinese are changing the culture and consumer habits of the Golden Triangle (the local luxury shopping district)”. A local luxury car dealer said: “They come here and spend like drunken sailors. God bless them!”

With the median age of population forecast to increase sharply in many countries (it is set to be 52.7 years in Japan and 49.2 years in Italy by 2030), demand for migrant workers will continue to rise in much of the world. Inter-governmental efforts to increase the mobility of labour will also have an impact. For example, ASEAN (the Association of Southeast Asian Nations) is in the process of implementing rules to make it easier for skilled workers to migrate within that region.

Ongoing growth in the number of middle class consumers in emerging markets will be another driver of growth. The impact of this is already being felt. For example, in Malaysia, households are now looking beyond Indonesia (their traditional source of domestic help). In November 2014, the New Straits Times newspaper reported that Malaysian households were unwilling to pay the monthly price of MYR1,000 (US$300) or more now being demanded for the services of an Indonesian maid. 40-year-old bank employee Siti Rasidah Aziz, who had been trying to hire an Indonesian maid for a year, said: “I would rather look for a maid from Vietnam or Cambodia, as it would only cost me about MYR700 a month”.

On the other hand, some governments, particularly in the Middle East, are seeking to reduce their reliance on foreign labour. This is reflected in such policies as so-called ‘Saudisation’, with the Saudi government trying to encourage local people to take jobs that they have heretofore seen as beneath them. Advances in technology, such as automation and robotics, could also dampen demand for less-skilled migrant workers.