Donald Trump’s victory in the US presidential elections in November has led us to revise our main macroeconomic forecasts not only for US, but also for all the major economies. The updated Euromonitor International macroeconomic forecasts are now available on Passport as well as in the Macro Model dashboard on the Economies, Finance and Trade page.

The latest Euromonitor projection for global GDP growth is 3.2% in 2017 and 3.3% in 2018. We have revised our GDP forecasts for 2017 for most of the key economies downwards, as some negative confidence spillovers and trade effects resulting from prospective US policy changes are expected. In combination with additional global factors, such as general low confidence, volatile financial markets, decreasing international trade, geopolitical challenges ahead, 2017 is likely to be a year of sluggish growth for the developed economies. Among the emerging markets, Mexico is expected to feel the strongest negative consequences of Trump presidency, while the expected revision of China-US trade relations is likely to harm the Chinese economy too. In 2017 some rebound after recession is projected for Russia and Brazil, while India will remain a leader among its peers. 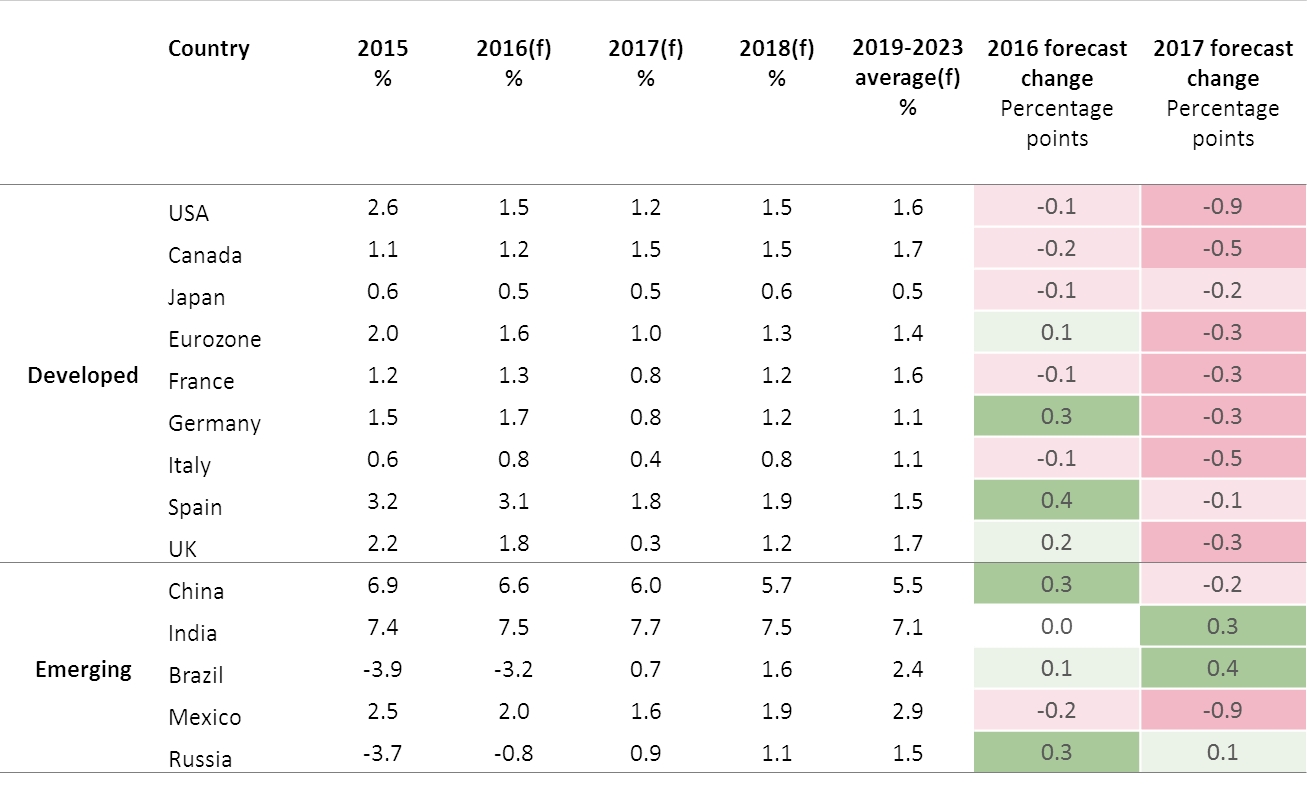 The low-growth environment will mean another low-inflation year for the developed world. Central banks are expected to react accordingly, by keeping monetary policy loose throughout most of 2017. 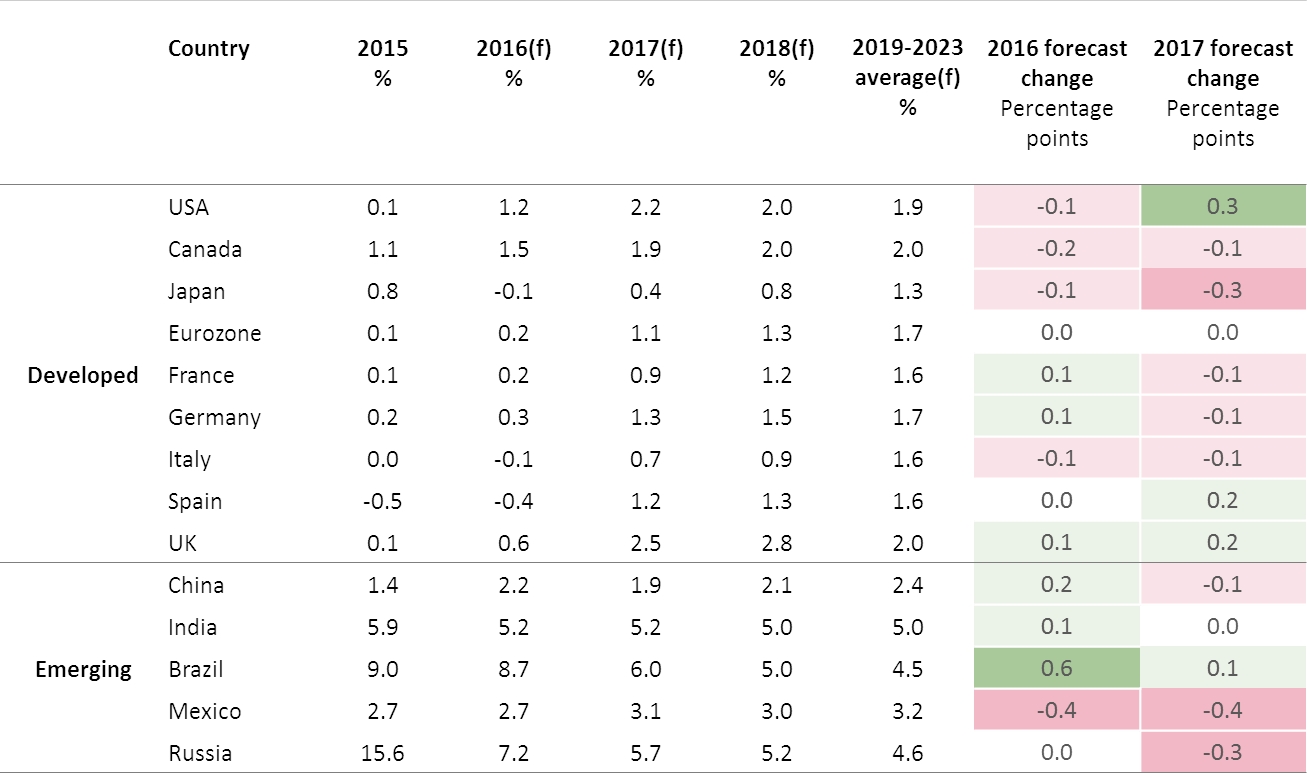 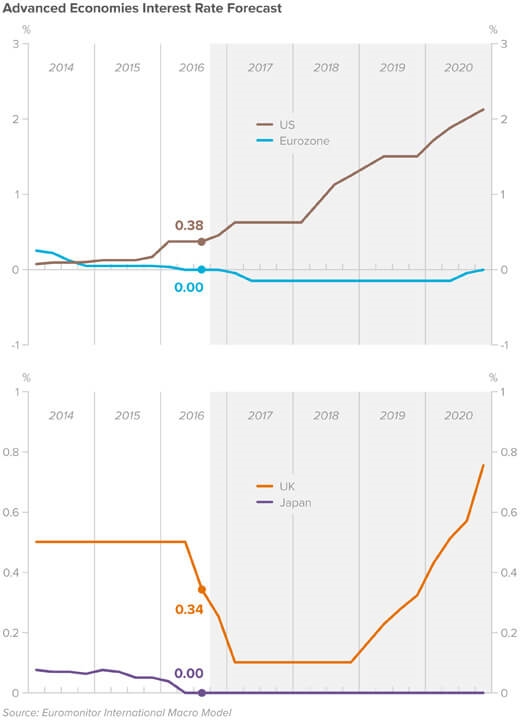 As the prospect of Donald Trump as US president is now a reality, Euromonitor International’s Trump Downturn scenario, introduced before the elections, has been removed from the Macro Model. The fact of this new president now underlies the new baseline forecast for the US economy. The previous (Pre-Trump) forecasts can still be viewed for comparison, while the new baseline reflects the most likely path under the new US leader.

Trump’s surprise victory has significantly shifted the outlook for the US economy. Our initial post-election forecast was for a major downturn, leading to annual GDP growth of 0.4-0.7% in 2017-2018. The positive response from financial markets in the immediate election aftermath has led us to an upwards revision of these forecasts by 0.8 percentage points. Nevertheless, relative to August we have still downgraded our outlook. We are now expecting 1.2% GDP growth in 2017 and 1.5% growth in 2018 (down from 2.1% annually in the August forecast).This comes after an already disappointing economic performance in 2016, with GDP growth likely to be just 1.5% (1 percentage point lower than our forecast from November 2015).

A more pessimistic US scenario would ensue if uncertainty increases more than is currently expected and the bulk of Trump’s pre-election policy claims for trade and immigration are actually implemented. Using the scenario of US growth slowdown in the Macro Model, we can see GDP growth of 0.4% in 2017 and 0.7% in 2018. These factors could also lead to a major downturn, with GDP falling by 0.5% in 2017 and stagnating in 2018. 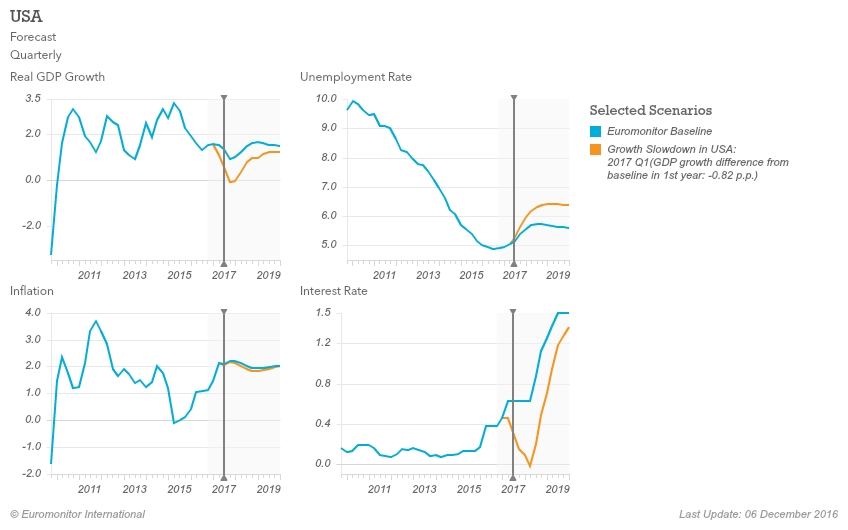