September 15, 2018 will mark the 10-year anniversary of the collapse of the investment bank Lehman Brothers – an event widely accepted as the start of the Global Financial Crisis (GFC). The bankruptcy of Lehman Brothers led to a run on money market funds and a financial market shock that required massive central banks’ interventions, and bailouts of banks to prevent a collapse of the financial system. The global economy still entered a recession as the global real GDP growth declined from 5.6% in 2007 to 0.1% in 2009. 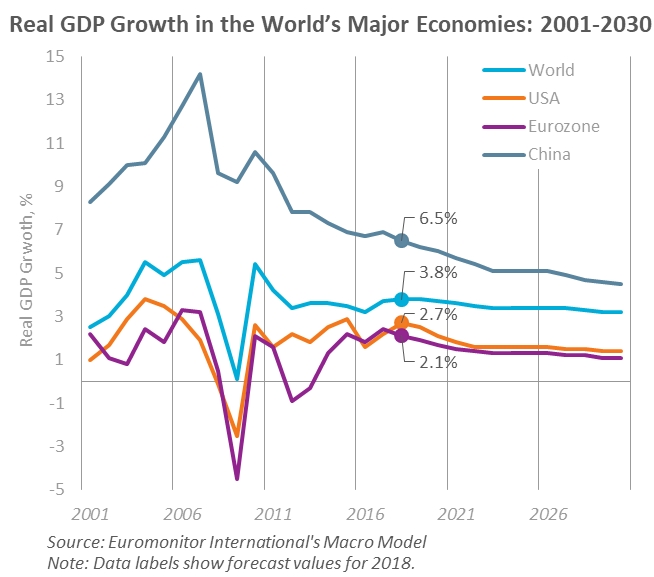 Over 10 years after the GFC, the global economy has gradually recovered. The US economy is undergoing a temporary boom with 2.6% growth forecast in 2018-2019. The Eurozone outlook is also optimistic with the real GDP growth projected at 2.0% in 2018-2019.

The long-term view, however, shows that household income and consumption are still depressed under negative effects of the GFC. Per capita consumption in the US is still 10% lower than it would have been under the trend growth over the last 50 years. The Eurozone as a whole has significantly underperformed the US economy in 2001-2017 by this measure, due to the extra shocks of the Eurozone crisis in 2011-2014, followed by a weak recovery. Eurozone per capita consumption is still just 1.6% above its pre-GFC level, with the aggregate average also masking strong differences among the member countries.

In China, the GFC’s impact has been smoothed out by a large fiscal and credit stimulus programme, though economic growth still slowed down gradually. Real GDP growth declined from 14.2% in 2007 to 6.3% in 2018-2019. The cost of the stimulus was an excessive rise in debt and investment levels and decline of consumption to GDP. Despite the recent rebalancing of the economy, China’s consumption to GDP ratio was 38% in 2017, compared to an emerging markets average of 51.5%. On the positive side, China saw a massive rise in living standards, with GDP per capita in PPP terms rising from 9% of the US in 2001 to 28% in 2017.

Slow increases in labour productivity are a global phenomenon in the last 15-20 years. Part of the productivity growth slowdown reflects persistent effects of the GFC. In the Eurozone and the US, fixed investment to GDP ratios remain below their pre-GFC levels. Lower investment rates have cumulated into less production capital, less research and development and lower gains from capital-biased technical progress. The GFC also contributed to a decline in new business entry rates and greater misallocation of capital across firms.

But the Eurozone economy’s performance has lagged behind the US, suggesting several Eurozone-specific factors. Labour productivity over 2001-2018 has increased at a 1.8% annual rate in the US, compared to below 1% annually in the Eurozone, which has been one of the main negative factors for the Eurozone economy in 2001-2018. A smaller proportion of high-skilled workers and stricter product and labour market regulations in the Eurozone relative to the US have reduced the ability of Eurozone firms to benefit from new information and communication technologies.

Deleveraging after the GFC

Despite broad expectations to see deleveraging after the GFC, the global debt continues to grow. The global non-financial sector debt has soared from 206% in 2008 to 243% in 2017. However, there are important differences among countries in terms of borrowing sector.

Excessive household borrowing was a key contributor to the financial crisis. US household sector has deleveraged after 2008, though household debt to GDP is still higher than in 2001. US corporate debt ratios, on the other hand, are rising again after some deleveraging in 2012. As of now, the rise in corporate debt levels does not appear to pose a major risk to the financial system, but it could emerge as a threat over a 5-year horizon.

In contrast to the US, the Eurozone economy has barely deleveraged since 2008. Total non-financial private sector debt to GDP is now higher than in the US. While the Eurozone household sector is much less indebted than the US, the non-financial corporate sector has a high debt burden, still exceeding 100% of GDP. This leaves it vulnerable to faster than expected interest rate increases or other financial shocks.

China’s credit and fiscal stimulus programmes have led to ballooning non-financial sector debt levels, rising from 143% of GDP in 2008 to 256% of GDP in 2017. Corporate debt to GDP started falling in 2016, but this was compensated by rising government and household debt. Household debt levels have increased above the average for emerging markets (40% of GDP); however, they are still quite low at 47%. While China’s debt levels are likely to remain extremely high by emerging markets’ standards over the next five years, any banking crisis is likely to be contained, causing a major downturn but avoiding a hard landing.

Macro Model is Euromonitor International’s quarterly forecast model for the global economy. Macro Model provides forecasts of the world’s major economies for GDP, inflation, interest rates and unemployment in 58 countries. It is also a powerful interactive tool to examine alternative “what if” scenarios, like a major trade war, and to see the flow-on effects across countries. This enables businesses to stress-test their strategy against hypothetical economic shocks.