The global economy is facing another year of uncertainty and anxiety in 2013. Throughout 2012, hopes were rife that a recovery would begin and resolutions would be found for the myriad of challenges facing both developed and developing economies. Unfortunately, 2013 will see austerity in developed economies backfire while emerging markets will have to look to each other and to their domestic markets for growth. On the bright side, the global economy is forecast to grow by 3.5% in real terms in 2013, a slight improvement on the 2012 figure of 3.3% but still nowhere near the pre-crisis record of 5.4%, reached in 2007. As 2013 progresses, growth will pick up and as such, Euromonitor International is expecting a recovery, albeit uneven and unstable. 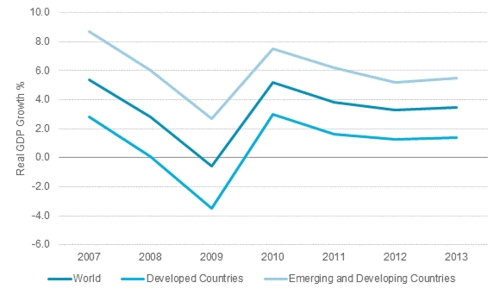 Our recently published Special Report: Global Economic Prospects for 2013 looks at the issues likely to impact negatively on global economic growth in 2013:

2013 will see most regions grow to some extent in real terms, despite the on-going fiscal crises in the USA and Western Europe, high unemployment and waning consumer confidence. The eurozone will be the only region to shrink in 2013, with -0.1% real GDP growth forecast. Our recent Special Report: Short-Term Forecast of Global Real GDP Growth looks at prospective growth rates for 2013 across the world:

2013 will see policymakers across the world struggle with many of the same issues they were faced with in 2012. However, lessons have been learnt in 2012 and Euromonitor International is looking forward to the green shoots of recovery appearing in the second half of 2013.