In 2015, consumers in emerging markets are more obviously aware of and concerned about sustainability and ethical issues as greener lifestyle aspirations are starting to be expressed in daily life and not just surveys. This trend is fuelled by drivers ranging from food safety worries to the sharing economy to a greater appreciation that luxury can be enjoyed via the consumption of experiences. Other drivers are the popularity of pet ownership and the visible negative consequences of a disregard for the environment, apparent in pollution, for instance. The sense that it’s cool to care is one shared by more consumers globally too. Concerns about environmental safety and responses to emergencies like flooding are increasingly being expressed over social media. 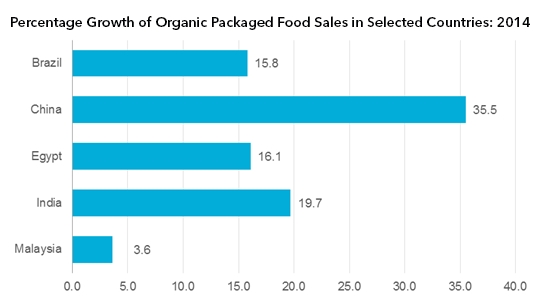 Note:  Organic packaged food includes food that is certified organic by an approved certification body and based on a system of farming that maintains and replenishes soil fertility without the use of toxic and persistent pesticides and fertilisers. This is an aggregation of organic baby food, bakery, confectionery, dairy, ice cream, oils and fats, ready meals, rice, sauces, dressings and condiments, snack bars, soups, spreads, sweet and savoury snacks and other organic food.

In 2015 the sharing economy is growing as consumers are preoccupied with access rather than ownership and pooling resources is becoming integral to urban life in emerging economies too. Cycling is racing towards the mainstream. On March the 2nd, tens of thousands of locals participated in the sixth annual Taiwan Cycling Festival.  In Taipei, a hit bike rental programme notched up 22 million rentals in 2014 alone.  Some 3,000km of cycling paths have been built in Taiwan in recent years, with almost 100% more planned, while half of Taiwanese households owned a bicycle in 2014. More consumers are buying green.  In China, companies such as Beijing Organic & Beyond Corp, have online stores, allowing consumers to purchase products over the internet. Many affluent Peruvians are purchasing organic baby clothing from brands like Lyda Baby.

Few were unmoved by the recent media image of a crying Vietnamese girl beside a roasted dog’s body – that of her missing pet. Animal welfare concerns have risen with the growth in pet ownership. Recent Chinese New Year celebrations that saw goats used in New Year marketing efforts, including a Hong Kong mall campaign inviting customers to feed a goat in return for a charity donation, saw thousands of online complaints.

Brazilians are highly focused on protecting their natural resources.  Beef sold in supermarkets is now labelled, certifying that it is not from a farm built on former Amazonian rainforest land.  A corruption scandal involving state oil company Petrobras has sparked huge street protests in Brazil, leading consumers to boycott firms they see as irresponsible, and to campaign against sales of environmentally harmful products and poor working conditions. A 2014 study by consultancy Opinion Box concluded that “ethical consumption is on the rise throughout Brazil”.

Pollution has proved a boon for gyms in China where rising spending power and worsening city pollution are driving many to exercise indoors. A local documentary, “Under the Dome”, highlighting the environmental damage caused by economic development, was viewed over 100 million times in just over two days after its release at the end of February 2015. In Chili, a nationwide late 2014 Environmental Ministry survey found that 33% of respondents considered air pollution to be the country’s main environmental problem with 86% of them keen on practical steps such as controlled car use.

Jakarta residents turned to Twitter to navigate high water levels and traffic chaos due to flooding during this February’s rainy season. PetaJakarta.org, a crowdsourcing website that pools flood-related tweets, recorded 800 tweets hourly on February the 9th.  The response of Etienne Turpin, a researcher from Australia’s Wollongong University, collaborating with Jakarta’s Disaster Management Agency, was:  “People see the value of using a social media network to do things other than just chat”.

More organic farms, some working closely with popular brands, are opening to the public to share their enthusiasm for sustainability and biodiversity. Two examples in Colombia are El Solar de Mao and the Eco Yoga Farm.

Segun Oyeyiola, a student at Nigeria’s Obagemi Awolowo University converted his old Volkswagen Beetle into a clean energy car by installing a wind turbine in the hood and a solar panel on the roof. Website fastcoexist.com discusses his green motivation and plans to make his prototype market-ready.

The Rising Importance of Sustainability Strategies