Harvey Nichols, the fourth biggest luxury goods retailer in the UK by retail sales value, has launched a state-of-the-art loyalty app that will reward customers for every pound they spend in its stores, its online platforms or in any of the brand’s upmarket bars and restaurants (including the famous OXO Tower on London’s South Bank).

Rewards will range from Champagne dinners to Botox and luxury massages. “We want to give our customers more than just pennies for points”, says Shadi Halliwell, Group Marketing and Creative Director at Harvey Nichols. The rewards are more luxurious than most loyalty schemes on the market, but the rationale behind the strategy is the same. It is about driving up sales.

Loyalty programmes and luxury goods are not obvious bedfellows, but there are a number of reasons why this type of scheme could soon become the norm. Firstly, money saving and deal culture has gripped UK retailing for some years. Luxury retailers have kept their distance for fear of diminishing their cachet, but this has not stopped a torrent of heavy discounting across the industry. Secondly, apps are at the forefront of retail digital innovation and are identified as key to attracting “internet junky” millennials. Thirdly, the UK’s luxury retail market has never been more competitive, so coming up with clever ways to attract customers is a key battleground. 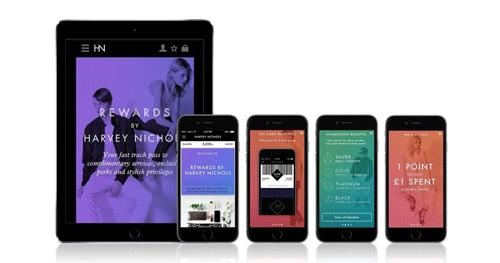 There is nothing groundbreaking about the way the Harvey Nichols rewards programme works. Customers are credited with points in return for spending cash. The more they spend, the higher up the points ladder they climb, and the more indulgent the rewards they can claim. Four different customer tiers are available: Silver, Gold, Platinum and Black, and customers are assigned according to how much they spend.

What is different about the programme is the decision to use an app rather than a card. According to Harvey Nichols, its own customer research showed that over 80% of its customers preferred an app rather than another card in their wallet. This makes sense given the soaring penetration of smartphones. Indeed, sales of smartphones reached 25 million units in the UK last year, according to data from Euromonitor International.

The wider question is whether this app is the opening salvo of a potentially more pushy digital strategy. It is being sold to consumers as a rewards programme, but once it is up and running it is certain to provide Harvey Nichols with more detailed data and information on the specific shopping habits of its customers.

That sort of information is hugely valuable, not only in terms of getting the brand’s product mix right, but also in terms of providing more bespoke marketing to its customers. In the wider retail landscape, pop-up messages on our smartphones, with personalised special offers, are set to become much more common, facilitated by in-store Bluetooth beacons. Such digital innovation could become attractive to Harvey Nichols assuming enough customers download the app.

In the luxury goods industry as a whole, personalised marketing ought to be especially attractive as it is potentially a way to offer promotions and discounts without harming brand image. Bespoke marketing is under the radar in terms of wider consumer perception, after all.

Digital innovation is set to be a key industry battleground

The scheme’s rewards are not limitless. They will be dished out to customers four times a year based on the previous quarter’s points total. Customers will have one choice of reward per quarter and the first rewards will be issued in September 2015. Harvey Nichols also says it plans to surprise loyal customers with “treats” throughout the year, including discount days, double points days, secret sales and sale previews, plus exclusive event invitations.

Like virtually everyone else in the retail industry, luxury retailers are necessarily adapting to the digitalisation of consumer lifestyles. Smartphones are ubiquitous and apps are here to stay, so an app-cum-loyalty-scheme is simply tapping into this reality. Expect other luxury retailers, if not to follow suit, then at least to come up with their own take on a luxury reward programme in the near term.

Three Key Trends That Will Shape the Future of Fashion

World Market for Apparel and Footwear

Apparel and footwear was among the industries worst hit by the COVID-19 pandemic, and as the ongoing conflict in Ukraine further disrupts the world’s economy,…

Bags and Luggage in Western Europe

Coronavirus (COVID-19) meant that Western European bags and luggage sales recorded a major decline in 2020. The closure of non-essential bricks-and-mortar…