SABMiller Plc’s move to buy the majority family-owned Heineken NV was a surprise to the global beer industry, but it being rebuffed was not. This seems to be a defensive move by SABMiller and a reactionary one to speculation of an Anheuser-Busch NV take-over at a time when the latter is accumulating capital in preparation for the biggest ever buy-out in the beer market. Heineken’s decision to rebuff the offer is of no surprise due to the majority ownership by the de Carvalho-Heineken family.

According to Euromonitor, the consequences of this buyout would significantly reshape the competitive landscape for the global beer market as the second and third largest brewers would bring together over 37 billion liters of beer sales at around a 19% share of global market volume sales in 2014. The combined companies would reassert their dominance on the beer market in Western and Eastern Europe, and Middle East and Africa (MEA) placing them on the heels of Anheuser-Busch InBev NV in second place on a global level with less than 1% volume share separating the top two brewers. A-B InBev’s chances to buy out SABMiller, as speculated by the industry, would weaken as the capital required for the buy-out significantly expands. Furthermore, A-B InBev would have to deal with a major competitor in future consolidation moves, beyond those that would already exist.

On a regional level the combined company would lead Europe’s beer market as they take over the top spot from Carlsberg A/S in Eastern Europe and reassert Heineken’s top position in Western Europe.  Furthermore the combination would form a virtual monopoly in Middle East and Africa considering that both brewers hold the top two positions.

If the SABMiller bid for Heineken was a high possibility it would make mutual sense in some instances and complications in others.In Europe, where Heineken leads the western market, SABMiller’s regional gains would be the biggest in actual volume sales. Additionally, Heineken’s holding of the Fosters brand license in the UK makes it complimentary to SABMiller’s global current ownership of the Australian subsidiary.

The impact of this buy-out in Asia Pacific is limited firstly due to SABMiller’s hidden share under the CR Snow joint venture and secondly due to Heineken’s almost 2% volume share of the region, even with the Asia Pacific Breweries ownership. In the Americas A-B InBev maintains its lead of both regions, however Heineken will expand its presence in Latin American markets outside of Brazil due to SABMiller’s monopoly in Colombia, Peru and Ecuador.

SABMiller’s foothold in the US can be complicated by anti-trust regulations if the government identifies a high degree of consolidation amongst three of the top five brewers in the market, via the MillerCoors joint-venture. However, the Heineken brand would potentially benefit from SABMiller’s wider distribution network in the US, if there were no competition issues raised. Simultaneously SABMiller would gain a vast foothold in the Mexican market, but the role of FEMSA’s 12.5% ownership of global Heineken NV via Mexico can possibly further block a total buy-out.

In the MEA the two brewers complement each other as they collectively cover a wider geography with significant market depth in each of the major African markets. Their soft drinks license for Coca-Cola across Africa would also present matching synergies in the distribution of carbonates and beer across sub-Saharan Africa where logistics are a major barrier in production and distribution.

Heineken NV and SABMiller Key Players in African Markets in 2013 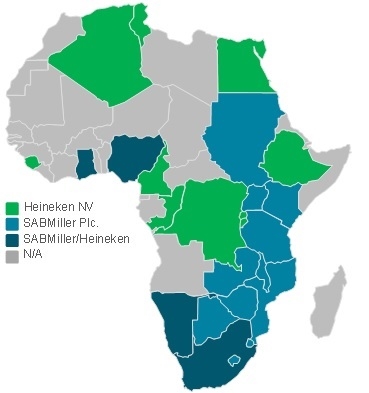 Further complications will arise from anti-trust issues in a wide range of markets considering both companies extensive geographic breadth and depth. EU markets will highlight the biggest complications where in examples such as Netherlands, Czech Republic, Italy, and Poland the combined ownership would place them above 50% of market volume in 2014.

The ramifications of this rebuffed offer in the market will put A-B InBev under pressure if it is serious about taking over SABMiller. The longer the top brewer waits the more likely that SABMiller will increase its net worth and the capital needed by A-B InBev for that takeover. This is likely to result in further consolidation action by SABMiller to stave off the take-over; whereas A-B InBev’s possible expansionary move in China could be placed on hold, depending on their priorities. The coming year would seem like an exciting time for the global brewing industry with a major consolidating move on the horizon.

Cannavision: Focus on the Consumer