Pro-democracy protests in Hong Kong, which appear to be getting bigger by the week, are the latest threat to luxury goods brands in an increasingly testing Asia Pacific market.

Hong Kong is a key regional hub for luxury goods shopping, generating sales worth US$7.5 billion in 2014. That puts it above countries such as Brazil and Singapore in the global luxury goods sales ranking (see chart 1). The problem is that wealthy shoppers from mainland China – a critical consumer base for the Hong Kong market – are choosing to stay away from the city while the unrest prevails.

To date, it is unclear whether Hong Kong’s loss is another city’s gain. There is some evidence that Seoul (South Korea) and Taipei (Taiwan) have been hosting bigger volumes of Chinese visitors over recent months. Equally, Western European and North American cities are also thought to be picking up some of the slack. Ultimately, however, it seems likely that luxury goods growth in Asia Pacific will be weakened by a slowdown in Hong Kong, especially categories such as designer apparel and luxury timepieces (see chart 2). This is more bad news for companies that rely on the region for a big chunk of their business. 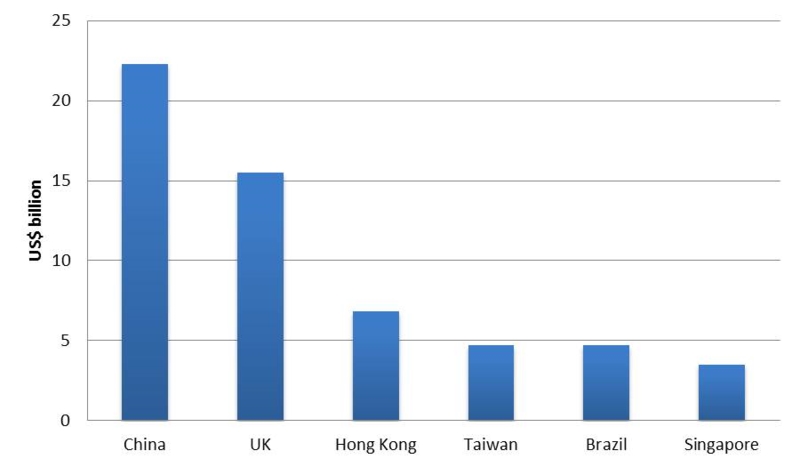 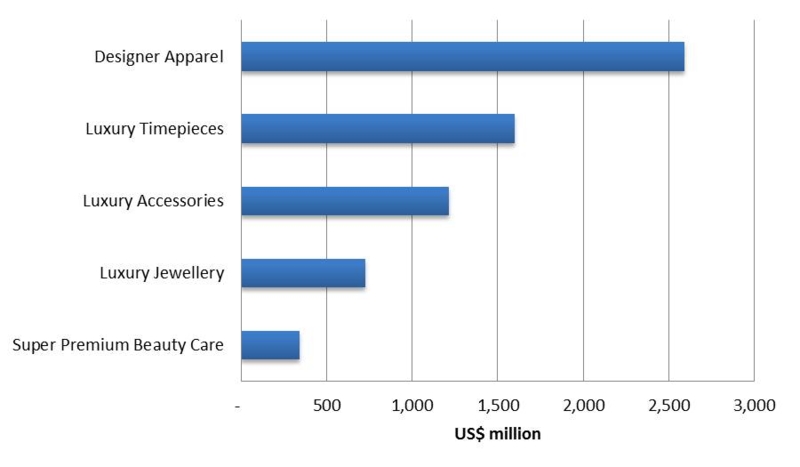 These are difficult times for luxury goods brands in Asia Pacific. The market in China is going through a period of readjustment as the industry wrestles with the challenges of a clampdown on extravagance and a cooling economy, whilst Japan’s luxury sales have been weakened by a hike in consumption tax. At the same time, Singapore has lost some of its retail swagger as international tourists seek new places to shop and Macau – once a mecca for gamblers – has seen a drop off in high-rolling visitors. And now, Hong Kong – formerly a safe haven for luxury goods shopping – has morphed into a centre for anti-Beijing political protests, turning it into a less attractive destination for millions of people from the Chinese mainland.

Small wonder, perhaps, that luxury goods companies which have invested so heavily in Asia Pacific over the last decade are now feeling the pain. Luxury jewellery maker Richemont, which counts on the region for around 40% of its global revenue, is having its worst year since 2009, for example. Its global sales were up 4% (at constant exchange rates) during the five months ended 31 August 2014, compared with the same period in the previous year. compared to the same period in the previous year, but growth in Asia Pacific (excluding Japan) was flat and sales in Japan dropped by 8%. Given the events taking shape in Hong Kong at the moment, the next five months could potentially be worse still.

The rise of the Americas

This latest derailment of growth prospects in Asia Pacific is a further signal that luxury brands need to shore up opportunities (and investment) in the developed markets of Western Europe and North America. Indeed, resurgent growth in the US especially has been a recurrent theme of the luxury industry’s financial results over the past year.

Tiffany & Co, for example, reported same store sales growth of 8% in the Americas during the second quarter of this year compared with 7% growth in Asia Pacific and a contraction of 13% in Japan (all growth rates on a constant exchange rate basis). Prada reported 14% sales growth in the Americas for the first half of the year, compared with 2% in the Far East (and 3% in greater China). And Gucci (Kering) reported a 7% sales uptick in the US during the first half of the year, against contractions in markets such as Singapore, Taiwan and Hong Kong.

It is true that the performance of luxury goods is not simply a matter of one region doing better than another. Some brands are continuing to do well in China, after all. Hermès, notably, saw sales growth in Asia Pacific (excluding Japan) climb 17% during the first half of the year (at constant exchange rates), compared with 13% in the Americas. However, the strong upward trajectory of the Americas (and the US in particular) does seem to be a unifying theme.

The search for new horizons

The slowdown in Hong Kong is also a reminder that the luxury industry needs to work harder at developing new urban consumption hubs. Indeed, cities that are not normally associated with luxury goods shopping could become much more important over the next decade and a half, such as Shenzhen, Guangzhou and Wuhan in China, Rio de Janeiro in Brazil and Mumbai in India (See Luxury Brands and the Irresistible Rise of Cities).

What seems clear is that luxury brands need to be more effective at spreading their risk. Too many are over dependent on the Asia Pacific region, while others have taken their eye off the ball in Europe and North America. And in the specific case of Hong Kong, shoppers who have been put off by the recent spate of political rallies will not necessarily flock back to the city’s shopping malls and department stores once things calm down. By then, they might have been lured by newer, more exciting shopping destinations. Luxury goods companies need to identify those emerging hubs and start building for a less risk-sensitive future.

Learn more about doing business in China in our free whitepaper

Hallyu 2.0 and the Korean Influence on Western European Luxury

Sustainability in Luxury Goods: An Interview with Euromonitor International and Valuence Holdings

While just a few global players own many of the top-selling personal accessories brands, the industry remains highly fragmented, with unbranded and private…

Survival of the Fittest in Luxury and Fashion

Luxury and fashion players are facing a deeply transformed consumer and retail landscape post-Coronavirus (COVID-19). Survival and recovery strategies are…

Voice of the Industry: Luxury Goods 2021

In the Voice of the Industry series, Euromonitor International connects with industry professionals to explore trends and innovations. This report focuses on…