The UK has voted, and a Brexit besiege is a closer reality. Quantifying its impact is difficult, and speculation is inevitable, given the volatile, unpredictable and unprecedented political scenario.

Using Euromonitor International’s Industry Forecast Model to assess Brexit’s impact on beauty and personal care, an initial examination suggests that the extent of the impact depends on industry players’ exposure to the UK, and their premium-mass offering.

Overall, UK sales over 2015-2020 are anticipated to be US$205 million less in a Brexit scenario. A mixture of higher operational costs and lower consumer spending could result in the premium segment being hit hardest, especially at the mid- to low-end of this segment. Consumers are likely to trade down, and the industry may have to scale back its premiumisation efforts, retaining only high-yield innovation in the resilient super-premium segment, the domain of affluent, price-inelastic consumers.

Premium fragrances over 2010-2015 have benefitted from consumers trading up due to various initiatives by brand owners and retailers to widen access and boost revenues. This, however, could be reversed if consumers curb premium spending (switching to smaller packs, lower concentrations and less frequent purchases). Raw materials, especially in high-end perfumery, can be quite costly to import, and trade restrictions, coupled with a weak pound, could see costs of development spiral upwards. This will either result in higher cost to the consumer (prompting them to trade down) or fragrance houses absorbing the cost and/or lessening the quality of the fragrance to limit price rises. The single market is paramount to beauty players and those that operate from the UK to serve Europe may decide to move operations to the continent in order to remain competitive.

The impact on price-inelastic consumers is likely to be absorbed, spelling good news to niche and luxury players. The result would be a stronger premium-mass polarisation in fragrances. Skin care and colour cosmetics would also witness weaker activity. Potentially, this could facilitate a resurgence of the mass segment, which in pre-Brexit times had weaker prospects than its premium counterpart in these beauty categories.

Slowdown in GDP per capita may hit income-elastic categories

Beauty categories such as men’s grooming and skin care are strongly tied to income rises. For example, men’s grooming would see a rise of 0.73% value growth for every 1% rise in GDP per capita. However, if disposable incomes fall (and this prospect is likely to impact existing high-earning men too if several businesses move some of their job functions to the European heartland), discretionary categories, which tend to rely on delivering a unique proposition to the discerning consumer who spends on product merit, could see weaker activity.

What could be the saving the grace is habit persistence in growing categories. It is rather unlikely that consumers dedicated to a beauty routine will cease to exercise their habits. Indeed, this is where mass brands could benefit, as consumers seek to stretch their pounds further. Furthermore, staple and health-related categories, such as oral care and dermacosmetics* (unlike overall skin care, prospects of which were rather tepid, even pre-Brexit), are likely to remain buoyant, as consumers assess their priorities in health-aligned beauty regimes. The price-efficacy value equation becomes crucial more than ever, and quality non-negotiable.

A global presence a cushion against risks 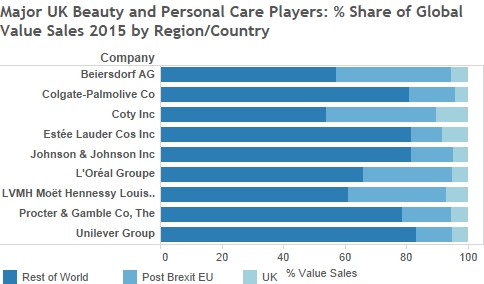 All major industry players have a diverse global footprint, and Brexit may not affect their business as adversely. Companies such as Coty and Estée Lauder witnessed fast expansion in the UK in 2015 (growing 12% and 10% respectively) owing to high-performing premium labels including La Mer, Jo Malone, Tom Ford, MAC, OPI and Philosophy. Most of these brands are likely to withstand a Brexit scenario due to the type of consumer they attract, coupled with their unique proposition and perceived value for money. Their standing in the UK is likely to remain unharmed. Similarly, the likes of Burberry not only benefit from their prestige reputation but also stand to benefit from a weaker pound, given this is likely to attract luxury shoppers from abroad.

Beauty players such as LVMH and L’Oréal are, arguably, among the most successful contenders in tapping into the opportunities offered in emerging markets over the past decade. Their continual strive to penetrate global markets is a robust buffer against external shocks, and Brexit may prove to be no more risky than a slowdown in far bigger markets such as China.