Euromonitor International’s Indonesia Economy, Finance and Trade Country Briefing focuses on one of the key emerging markets with immense growth potential. To accelerate economic growth amidst numerous global challenges, Indonesia has been implementing various reforms. A series of interest rate cuts was carried out by the central bank to stimulate credit growth. Additionally, the government has been announcing large fiscal spending plans, with an aim to achieve an economic growth rate of over 7.0% annually, which it has not yet achieved, given soft commodity prices and a slowdown in China. Although, the economy grew at a robust pace of 5.0% year-on-year in real terms in 2016, which is expected to rise to 5.2% in 2017, it is not sufficient to generate enough revenue for the government’s ambitious plans, including eradicating all slums across the nation by 2019, amidst a high budget deficit and weaker than expected public revenue. 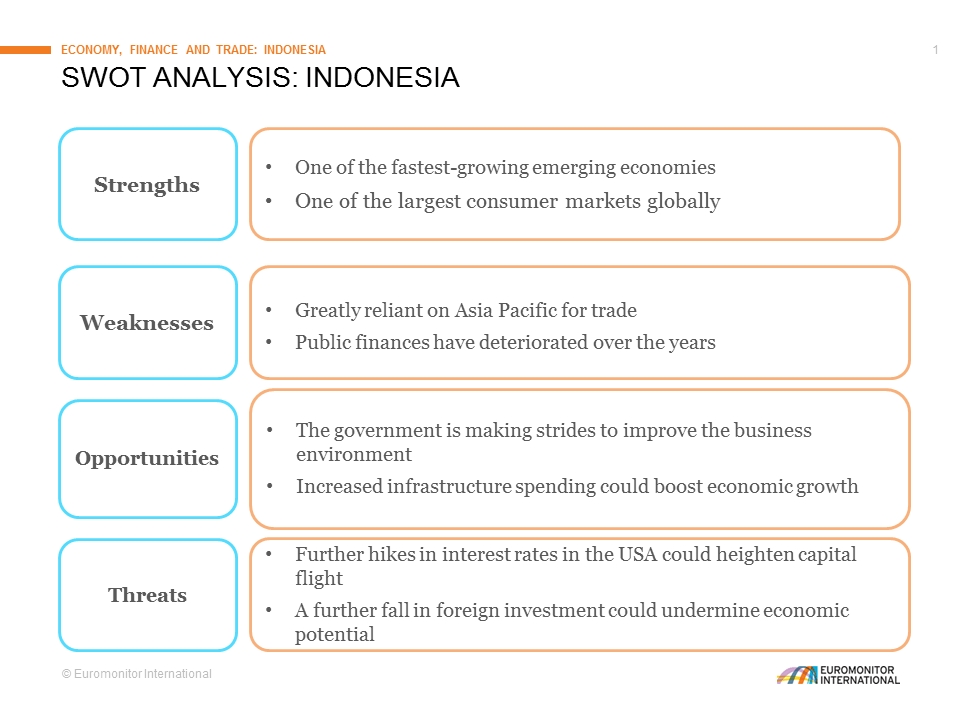 Medium- to long-term economic outlook remains strong, but the high budget deficit is a concern

The government continues to implement major monetary and economic reforms

In a bid to accelerate the economic growth rate, the country’s central bank, Bank Indonesia (BI), slashed its key interest rate six times from a high of 7.5% in 2015 to a record-low of 4.75% in 2016, and became the biggest rate cutter in Asia in 2016. However, given a rising trend in inflation and likely hikes in interest rates in the USA, Indonesia remains exposed to potential large capital outflows. To avoid this, the BI has left its key interest rate unaltered since October 2016; thereby causing a lag in credit growth. However, to address this issue, the central bank has eased guidelines on the proportion of cash that commercial creditors must reserve, offering them more freedom in managing liquidity. In July 2017, the quantity of total deposits kept by the banks with BI on a daily basis was further cut to 5.0% from 6.5%. On the fiscal front, the government has been promoting public private partnership (PPP) infrastructural programmes and its current medium-term development plan for 2015-2019 focuses on attaining inclusive and environmentally sustainable growth, which is a part of its broader National Long-Term Development Plan (2005-2025). Additionally, in order to boost Indonesia’s industrial sector, the government has introduced fiscal stimulus and deregulation measures through a series of economic policy packages since September 2015. The above measures have helped the real economy grow at a healthy pace of 5.0% year-on-year in 2016, but this remains below the government’s expectations.