With a retail value of US$9.6 billion, China is far and away the world’s value leader for tea, accounting for over 23% of the global market. Given the traditional consumption of this product across much of Asia, China’s position is unsurprising. However, most do not realise that 38% of this value (and 55%% of China’s 2007-12 tea value growth) comes from the instant tea category. In 2002, instant tea was a mere 4% of tea sales and has grown US$22 billion in the last ten years. Examining these products more closely, both in their formulation and positioning, it becomes clear that instant tea is not only a dominant force in China’s hot drinks culture, but represents its future due to its resonance with China’s youth.

From street stalls to supermarkets

China dominates all other nations, with 93% of the world’s instant tea sales. Leading Western European instant tea brands, France’s Les Infuselles and Italy’s Sogni d’Oro, are instant teas with herbal flavours often used for their medicinal qualities. Unlike the medicinal instant teas of Western Europe, China’s instant teas capitalise on the popular “milk tea” phenomenon that has swept much of Asia. These are tea products that contain milk, can be served sweetened or unsweetened, and feature flavours such as red bean, jasmine green, or oolong. China’s instant teas mimic these flavours, with some even including the ability to add “bobas” (tapioca pearls used in bubble tea) to the beverages.

The popularity of instant milk teas can be traced to foodservice where cafés and street stalls and kiosks would serve milk and bubble teas to consumers of all ages. Street stall/kiosk operators like Happy Lemon, Tea Storm and Jack Hut would mix brewed black and green teas with dairy or non-dairy products, syrups, and various types of bobas to make a wide selection of hot and cold beverages. These products, which saw great popularity with young consumers with a sweet tooth, helped grow the retail sales at these chains by a combined US$143.6 million from 2007-2012. But it was the affordable, instant retail version of these products that has taken tea by storm recently.

Guangdong Strong’s U-loveit and Zhejuian Xiangpiaopiao’s Xiangpiaopiao brands have emerged as the leading players in instant tea with 2012 retail sales of US$554 and US$536 million, respectively. This represents a combined US$946 million in growth since 2007, and outlook for the future is strong as both companies have expanded distribution to second and third tier cities across all of China. Along with providing a product similar in taste to the teas available at foodservice, convenience in format and packaging, as well as a marketing campaign targeting youth have been instrumental in this growth.

The innovative single-serve packaging of U-loveit and Xiangpiaopiao is a huge hit amongst Chinese consumers. The instant teas are served in on-the-go paper cups with plastic lids. These containers are shrink-wrapped in plastic, demonstrating another layer of protection against possible contamination (an important factor after Lipton became embroiled in a pesticide issue in 2012). Inside the cup is a sealed pouch of instant tea and a straw. (The bubble tea variants also contain a separate sealed pouch, as pictured below). Consumers then merely add hot water, mix, cover, and they have their very own milk tea that they can leisurely sip and carry with them, all with a prep time of under 2 minutes. This on-the-go packaging is important for Chinese consumers as urbanisation, busier lifestyles, and longer work hours have made the time intensive process of traditional tea brewing impractical for many. And the availability of the product at retail lets consumers quickly prepare the product at home or bring to school or work and prepare with hot water. 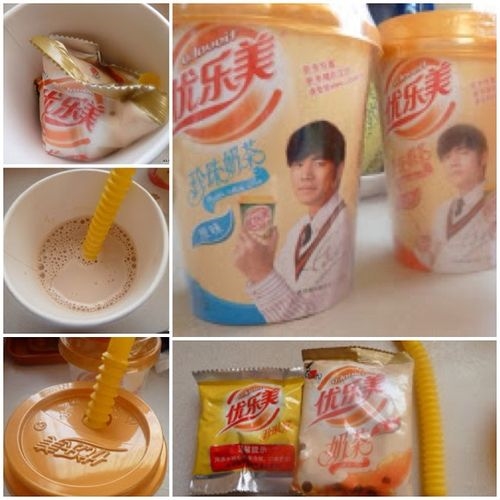 Price has also been a key factor for growth. Milk teas from street stalls and kiosks can be quite pricey, especially for penny pinching students and young professionals. A 500 mL cup of redbean milk tea can be purchased from Tea Storm for US$0.98. Compare this to a cup of Xiangpiaopiao’s red bean milk tea, which retails for US$0.57 at supermarkets. Whereas such price differentiation can make a difference in markets like the US and Western Europe (where café culture includes a social experience that justifies higher prices) street stalls and kiosks do not provide a similar “third place” experience in China. Thus, the higher foodservice prices seem less justified when Chinese consumers can simply add hot water to their own on-the-go cups and converse with friends at work or school.

But perhaps most important has been the market position of the products. The design, logos, and colours of these products also resonate with this a young consumer base. The cups are distinctive in their shape and the colour of the prominent plastic lids and labels designate the flavour of the milk tea. Examples include Xiangpiaopiao’s green for green tea, red for chocolate, pink for strawberry, purple for yam, illustrated above. Television commercials also feature the beverage being consumed by young students at bus stops or on school campuses. 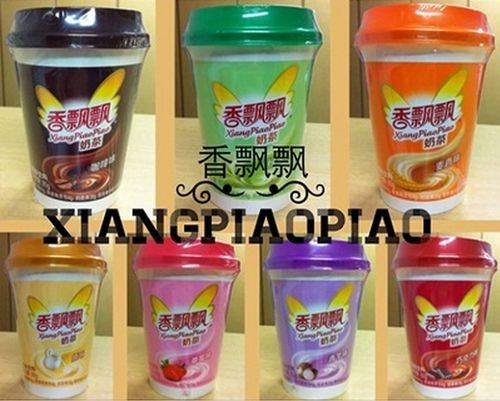 Celebrity endorsement has also made an impact. Xiangpiaopiao has employed famous actresses to be its spokespeople to enhance its brand influence among young people. U-loveit has also been at the forefront of celebrity endorsement, signing well-known pop music sensation Jay Chou to a sponsorship deal in 2010. Since then, the company has featured Chou’s image on their tea cups and instant multi-serve bags. It also ran a series of international commercials with Chou and actress/singer Jiang Yu Chen entitled “Story of Love in 21 Days”, which featured the couple courting one another over a cup of U-loveit while Chou’s ballads played in the background. Such marketing efforts have been boons to both brands, which have each expanded distribution and manufacturing to second and third tier cities across all of China while adding almost US$500 million each in retail sales from 2007-12.

Takeaways for other beverages categories

While instant milk tea has shaken up the tea category in China, its success is instructive for all beverage manufacturers. Global and local producers alike are constantly on the search for products that appeal to China’s youth consumers and meet the country’s changing macro-economic factors such as urbanisation and busier lifestyles. Instant tea manufacturers has found the successful formula by taking a product already popular thanks to local foodservice operators, adding their own unique single-serve packaging format, and coloured the product with pop culture spokesmen that speak specifically to Chinese youth culture. U-loveit and Xiangpiaopiao have also done this while keeping prices affordable and working in a category (tea) that is entrenched in Chinese culture. This innovation and growth should serve as strong examples for global beverage players, as well as make both Guangdong Strong and Zhejiang Xiangpiaopiao ripe targets for acquisition.

Trends and Outlook for BNPL

Buy now, pay later (BNPL) lending has rapidly become one of the more popular lending formats in recent years. Instalment billing is growing, with a variety of…