From smartphones to desktop PCs, washing machines and shampoos to cognac and UHT milk, the Chinese market is now the largest prize for an FMCG company. It is hard to not see China’s growing importance in the global consumer landscape. In 2013, China became the second largest consumer market globally, marking a symbolic transition for a country previously known as a manufacturing hub for Western companies to a US$3.4 trillion consumer economy. In 2014, China had the largest market size in value terms (not volume!) for 241 categories, behind only the US.

Figure 1: Number of Categories Where Country Has the Largest Market Size Globally, 2014 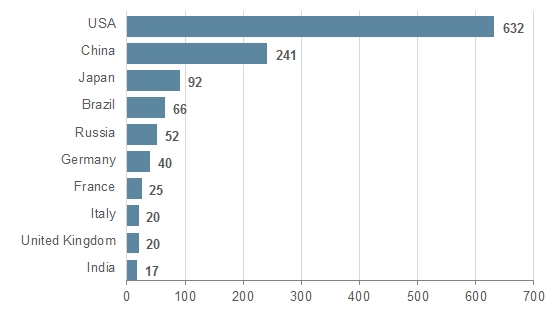 Over the past quarter of a century, the economic growth achieved by China has been phenomenal. Through a combination of exports, massive infrastructure spending and gradual market liberalisation, China developed from a poverty-stricken economy 30 years ago into the world’s second largest economy. Annual real GDP growth has averaged 10% in real terms since 2000, and China contributed US$7.4 billion to global GDP over 2000-2014 (in constant prices), or the equivalent of adding two new economies the size of Germany to the global economy. Combining both scale and speed, the country became by far the biggest game-changer in the world’s modern economic history.

Historically, however, much of the Chinese growth has been driven by exports and investment rather than consumption. Private consumption today still accounts for a relatively small share of China’s GDP: 37% in 2014. By comparison, consumer expenditure in the US made up 67% of total GDP, 59% in Japan, and 54% in Germany. However, given the absolute size of the Chinese economy, even a fairly small proportion can produce significant outcomes.

In absolute terms, China added more to global consumption than any other economy, including the US. The implications for the global economy are huge. The world saw a US$13.6 trillion increase in consumer expenditure in 2000-2014, in constant price terms. Of that, almost 20%, or US$2.7 trillion, originated from China. For the 2008-2014 period, the increase in Chinese consumption was even more important, and accounted for a third of total new consumer spending globally, generating an additional US$1.6 trillion of new spending (or the equivalent of what UK consumers spend in total).

The single biggest driver behind growth in Chinese consumption in 2000-2014 was its soaring food and beverages expenditure. Since 2000, consumer expenditure on food expanded by 7.5% annually in constant value terms and added almost US$601 billion of new consumption. Of that, spending on meat (especially pork and poultry) and vegetables contributed the most: 26% and 21% of all new food consumption respectively, indicating that Chinese consumers are moving away from the grain-based diet, and towards Western eating patterns. In 2014, total Chinese consumption of food and non-alcoholic beverages reached US$943 billion – twice the GDP of Austria.

Other major categories where the largest part of new spending went were housing and utilities (US$463 billion of new spending), clothing and footwear (US$239 billion) and transport and autos (US$249 billion). The latter is interesting, since it marks the transition of consumer spending from necessities to more expensive items – even though the majority of this category went to transport services, automotive vehicle purchases increasingly account for a larger share and China is already the largest market for automakers like Audi.

Figure 3. Biggest Contributors to Consumption Growth in China During 2000-2014 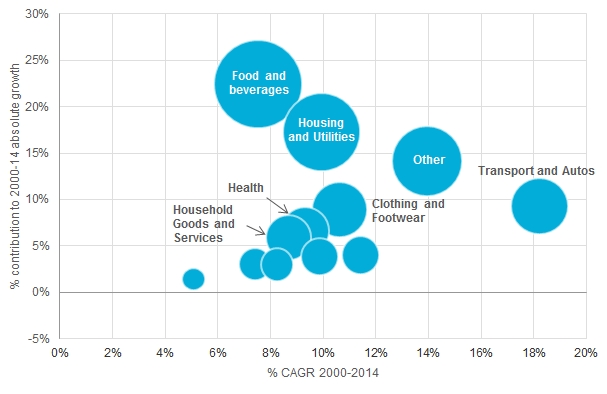 How much China spends is remarkable by any scale. What is even more interesting is its anticipated future spending, as rising wages combined with higher government spending on healthcare and pensions will shift a higher share of income from savings to consumption (Chinese savings rates are currently among the highest in the world, partially due to lower levels of social security). Over 2014-2020, per capita consumer expenditure in China is expected to grow by around 7% per year, bringing total spending to US$5.7 trillion by 2020.

Consumption will also be strengthened by China’s ongoing urbanisation, which should produce tens of millions of new middle-class citizens in the next decade. In March 2014, the Chinese government launched the National New-type Urbanisation Plan for 2014-2020, which aims to increase the country’s urban population share to 60% by 2020, up from 53% in 2013. Already, consumption in China’s major cities is 1.5-2 times higher than the national average, and the trend is expected to persist.

With US$2.3 billion of new Chinese consumption coming our way in 2014-2020, it is quite clear that tapping into that growth will be at the core of strategic plans for many FMCG companies. By 2018, the number of Passport categories where China is forecast to be the global leader in value sales will grow to 305. By 2020, the Chinese will account for 11% of the world’s total consumer expenditure, up from the current 8%. In some product areas – including tobacco and milk formula, among others – Chinese consumption is expected to reach about 50% of the global total.

Figure 4: Number of Categories where China had the Largest Market Size Globally, 1999-2018 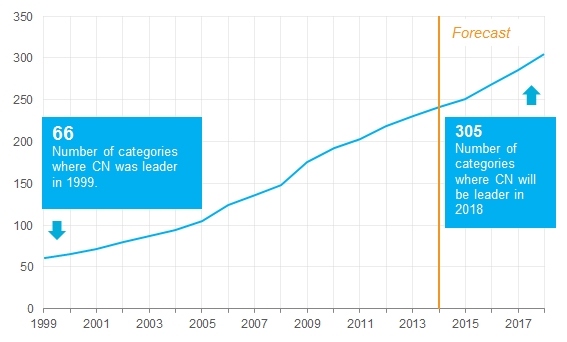 The potential is there – tapping into it is the challenge. The times when foreign brands enjoyed consumer preference due to safety and quality association are fading, as domestic firms are starting to catch up with their foreign rivals in a number of industries, and Chinese shoppers are becoming more demanding than ever before, no longer willing to pay a premium for a foreign brand just because it is foreign. As the competition is becoming more intense, multinationals will have to work harder to grow their brands in China, where consumers are becoming increasingly discerning and sophisticated as well as shopping increasingly more online.

Learn more about our Center For Analytics, Modelling and Innovation