Prior to about 2009, one cannot really speak of a“global” market for coffee pods, because the market was so heavily centralized in Western Europe that Switzerland by itself had more annual sales than the entire developing world. However, in the relatively short amount of time since then, Europe has fallen in share to less than half of the global market. The primary reason for this was the astounding expansion of the North American pod market, which quadrupled in size during the review period to reach USD5.7 billion in annual sales in 2016. 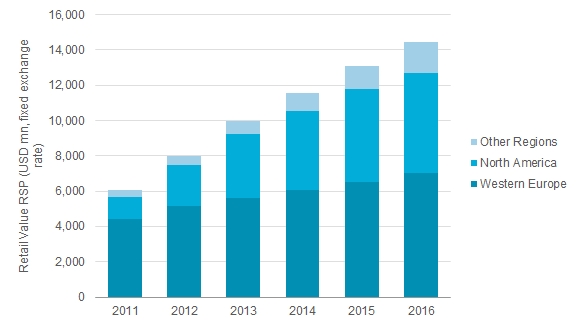 The boom years of North American growth, however, are over. By 2019 North America will be the slowest-growing pod region of all, with annual volume growth falling to 4%; a far cry from the 82% rate it achieved in 2012. While much of this has to do with market maturity, there is another factor playing a major role: the supremacy of the Keurig system. Although parent company Keurig Green Mountain (KGM) has benefitted a great deal from its near-total control of the American and Canadian pod markets, this has been detrimental to the category as a whole, keeping prices high and limiting consumer choice. This has become a greater issue as KGM struggles to regain its footing after the negative response to the launch of its Keurig 2.0 system. KGM was very successful in making the K-cup virtually synonymous with pod coffee in the minds of most North Americans, but the flip side of this success is that if the Keurig system struggles, it takes the whole category along with it.

It would be easy to blame the slowdown in North America purely on a maturing market. While that is of course part of it, it cannot be the only factor because of the evidence that indicates unmet potential still does exists. Even with the dramatic expansion of the market in the recent past, pod penetration remains well below that of Western Europe. 15% of the coffee that Canadians drank at home in 2016 was brewed from a pod, about in line with the proportion in countries like Germany and Switzerland, but the figure in the US was only 9%, above the global average but still well behind many comparable European countries. That suggests that there is still a great deal of theoretical room for US pod consumption to expand. 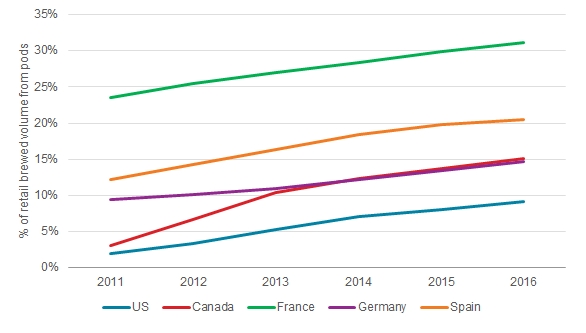 Indeed, according to Euromonitor’s Industry Forecast Model, volumes in the US are probably less than half of what they could hypothetically be, based on analysis of comparable markets where pods are more developed. Canada too, has plenty of unmet potential, but far less than the US given Canada’s already-high consumption numbers.

Despite its problems, the Keurig system still dominates the North American market

North America is the only one of the world’s regions where a Nestlé system is not the most popular. Nespresso has been gaining share, but it still accounts for not even a tenth of annual machine sales, and no other system, Nestlé or otherwise, has more than 1%. For as long as North America has had a sizeable pod category, the Keurig system has been the only system that mattered. This lack of competition has had considerable implications for the market as a whole. 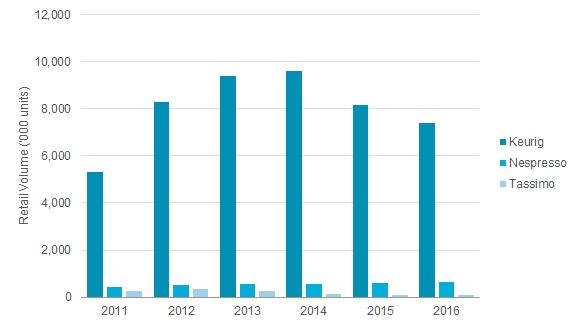 The trouble began around 2012, with the expiration of Keurig’s K-cup patent. Although it retained control of most major brands through licencing deals, the prospect of unlicensed pods taking over the system concerned KGM enough that its second-generation brewer, the Keurig 2.0, featured digital rights management technology that prevented it from working with any non-approved pod.

This move went over poorly. While consumers had accepted that they were forced into purchasing Keurig-compatible pods that did not mean that they ever liked it, and Keurig’s attempt to extend its monopoly rubbed many people the wrong way. A public backlash set in against the company, which was compounded by its initial refusal to launch a 2.0-compatible My K-Cup (a reusable pod that can be filled with any standard ground coffee), creating a black eye for a company whose commitment tosustainability was already widely questioned. Sales of both Keurig machines and Keurig-branded pods peaked around this time and have yet to recover. The share price plummeted and the company was purchased and taken private by JAB Holdings in 2015.

While US pod sales continue to grow, sales of both Keurig-owned and Keurig-licenced brands have largely been stagnant since 2013 and the wide emergence of low-cost unlicensed competitors. The only official brands that are gaining in sales are those at the low end of the value spectrum like Donut Shop and Maxwell House. The fact that this is uniquely a Keurig problem can be seen by looking at North American sales of Nespresso, sales of which are up and unit prices are stable. The issue is less that American and Canadian consumers are unwilling to pay for pods so much as that they do not feel that Keurig’s pods specifically are worth the mark-up. 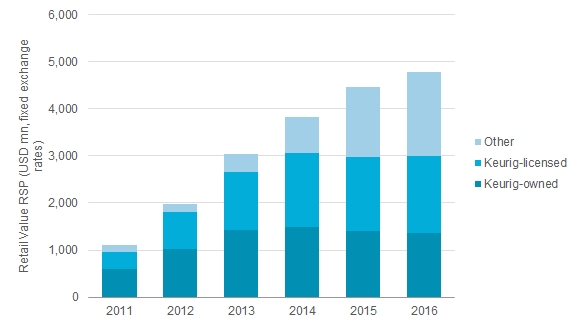 Keurig’s monopoly is driving consumers away from the category

Even with the expiration of the K-cup patent, Keurig still enjoys a great deal of pricing power. A litre of coffee brewed from pods is six times as expensive as a litre brewed from standard ground in North America, compared to four times in Australasia and just two times in Western Europe. This disparity strongly suggests that there is still a base of consumers who are being priced out of the category.

Keurig’s dominance also means that American and Canadians are not getting access to all of the advancements being made in the category. For example, Lavazza recently released a line extension to the A Modo Mio system called the Jolie which can brew an espresso without making any more noise than a refrigerator. Lavazza plans to release the Jolie in the US in the near future, but it isdoubtful most consumers will ever hear about. Presumably there are consumers who might be interested in purchasing a machine, but most will never get the chance to because of NorthAmerica’s market structure.

Is there life in North American beyond Keurig?

The mostly likely future for North America is continuation of the status quo. KGM tries to take advantage of its wide brand roster to convince consumers that all of the quality pod products remain in the Keurig stable and that they are worth paying for over less expensive unlicensed K-cups. While this helps the company to keep its margins intact, it means that growth in the category slows as consumers are turned off by cost, sustainability concerns, and frustration with the 2.0 system. This will likely be particularly apparent on the higher end. Higher-priced brands like Green Mountain have been Keurig’s worst performers in recent years, making prospects for mid-tier brands like Starbucks or value brands like Donut Shop much better. Other pod systems exert no noticeable impact other than moderate growth by Nespresso, which peels off some of the higher end of the price tier that Keurig is losing.

To deviate from this future and to start to bring North America’s untapped potential into the category would require one or both of two things to happen. One possibility is dramatically falling prices in the category bringing in consumers who were previously avoiding it because of how expensive it was. KGM itself could be the impetus of this by deep discounts in order to battle the increasing number of private label brands out there, or a value-oriented competing pod system could successfully enter the market and begin a price war (current number-two Nespresso is unlikely to do this because of its premium positioning).

The other option is to attract some other group of consumers that is currently avoiding the category. Many of these are probably unreachable (non-coffee drinkers, people who have brewing needs that single-serve does not make sense for, etc.). The most promising is probably environmentally-minded consumers who have avoided the category because of the amount of waste it generates. Single-serve coffee has a great deal going for it in a green sense (it cuts down on undrunk coffee that needs to be poured down the drain, for example) but many people remain fundamentally uncomfortable with the large amount of packaging waste pod coffee currently generates. Should KGM or someone else do something that causes a major reversal in the category’s green reputation (changing its pods to an inexpensive but fully biodegradable pack type, for example), these consumers might be persuaded to abandon their objections to pod coffee. This will be a major struggle, though, whether or not the category goes after environmentalists or some other group instead; the low-hanging fruit in the category is gone. Everyone left has at least one serious objection to pod coffee that will take a great deal of effort to overcome.

If neither happens, then the current structure will likely endure, with the Keurig system dominant and no other brand except Nespresso even being worth mentioning. In such a scenario, North America’s considerable unmet pod potential will in all likelihood remain just that: unmet.

Cannabis in North America: Ease of Access and Format Diversity Drive Adult Use