Lactalis, the brand owner of President, grew sales of juices internationally thanks to a string of acquisitions in dairy. It ranks third in the global dairy market, after Danone and Nestlé. The acquisition of Parmalat in 2011 made the privately-owned French company a major player in juices in a few countries. Euromonitor International’s data show that Lactalis registered off-trade value shares in soft drinks in 13 markets across Europe, the Americas and Africa, and it just needs to expand into Asia and the Middle East to make itself a truly global juice player. In 2011-2013, the company outpaced the global soft drinks market, having achieved a net sales increase of US$150 million. The Lactalis off-trade sales of soft drinks amounted to US$947 million in 2013, ranking it 19th in juices and 44th in soft drinks globally. This is good progress for a company that is essentially a dairy company with no focus on soft drinks. As the company is continuously expanding its dairy businesses, its juices sales are expected to grow as a sideline thanks to the opportunity of leveraging its dairy facilities. 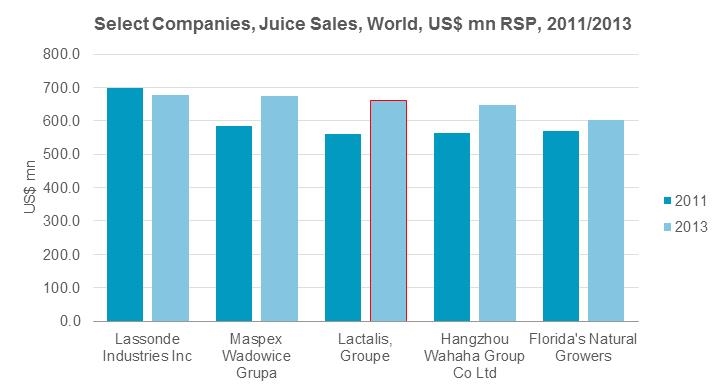 As the 15th largest agri-food group worldwide, Lactalis has 192 industrial sites around the world and a workforce of 61,000. In 2013, dairy accounted for over 90% of the company’s packaged food value sales, with dairy also providing the foundation for the company's presence in the oils and fats and baby food categories. According to the company’s corporate website, cheese is the core category, contributing 34%, and soft drinks is apparently included in the “Other” division, accounting for 7% of the group’s turnover. As a private family-run company, Lactalis disclosed little financial information and corporate strategy in the public domain.

However, it is clear that the company’s regional market diversification has been ongoing through an active acquisition strategy between 2008 and 2014, as a result of which its reliance on Western Europe has gradually declined. At the same time, the company has expanded most significantly in the Americas and in the Middle East and Africa in its dairy operations.

As the company looked for opportunities in emerging markets, Asia Pacific has not been a major focus, even though other global dairy players are looking to expand in this region, establishing Chinese dairy operations. With China set to lead dairy market growth over the forecast period, Lactalis may find it is frozen out by other players if it does not move soon. Reliance on exporting has little impact and influence on this market. Key to establishing a consumer retail presence in this market are local production and supply chains. Without a prominent dairy presence, it is unlikely Lactalis will suddenly emerge as a major juice player in China based on its historical growth tactics and pattern. China is set to see absolute growth of dairy sales of around US$32 billion, compared to juice’s US$14 billion, in 2013-2018, suggesting that even securing a minor slice of the market growth could mean business worth millions. Thus far, Coca-Cola, Ting Hsin and Uni-President may not need to be too concerned about any Lactalis aggression in dairy, but they do need to note that Lactalis can advance its game plans in juice once its dairy investments are in place.

In 2012, Lactalis added Skånemejerier in Sweden to its line-up in dairy and acquired Ljubljanske Mlekarne in Slovenia in 2013, reinforcing its presence in Europe. In Brazil, Lactalis purchased Balkis. In 2014, the French company bought Tirumala in India, marking its first major acquisition in Asia Pacific. In 2014, Lactalis acquired the Harvey Fresh dairy company in Australia, producing both dairy and juice products. Some of the acquired companies already had juices in their product lines prior to the deal, meaning Lactalis would inherit them and continue the juices businesses.

Performance in its key juice markets

Euromonitor International data show that juices accounted for around 70% of soft drinks value sales at Lactalis in 2013, with Venezuela, Italy and Russia being key markets, and it managed to grow its juice sales by nearly 20% in 2011-2013. Other soft drinks products include RTD tea, liquid concentrates and RTD coffee. There are different opportunities and challenges for the company in these core markets. Its international juice brand Santàl has prominent positions in Venezuela and Italy and a good position in Russia, while its Frica brand ranks second in Venezuela’s juice market.

In Venezuela, the local Lactalis subsidiary Industria Láctea Venezolana CA (Indulac), part of Parmalat Group, led juice value sales with a 27% value share in 2013. This company manufactures and markets Frica, a brand with a long tradition and high recognition levels in nectars and juice drinks. Lactalis also has Santàl, an international brand that leads reduced-sugar nectars. Juice is set to see a volume CAGR of 3% in 2013-2018, improving on the 2% CAGR of the historical period. Price will continue to be one of the main competitive advantages supporting growth in the coming years. A marketing message targeting family consumption that competes against carbonates is likely to gain space, given the fact that Venezuelans will continue to look for affordable and versatile options that can be consumed by all family members. As well as local brands such as Yukery, Frica faces competition from international brands such as Coca-Cola’s Del Valle and Kapo and Aje’s Cifrut. As Coca-Cola’s key juice brand for Latin America, Del Valle largely outpaced Frica in 2013, backed by good marketing and wide distribution.

Lactalis has been making incremental gains in both market share and ranking in Australia’s packaged food market since 2011, with off-trade value sales reaching US$1.2 billion. With its prominent position in packaged food, the company may well leverage the existing food facilities to develop Harvey Fresh’s juices business and gradually grab share from existing juice companies.

In Western Europe, Lactalis saw its juice sales decline in Italy, with off-trade value sales down by around 20% in 2011-2013, partly affected by the economic slowdown. Going forward, Italian consumers will prefer organic 100% juice and organic nectars. Despite these types of products being sold at premium prices, due to their more natural composition, consumers appreciate these types of drinks. Organic products have good potential for growth, as the flavour variety is still limited as of today. Innovation is particularly orientated towards introducing new flavours and formats that can widen the consumption occasions. Thus, Lactalis may need to consider widening its product portfolios and launching premium juices.

In brief, juices is a growth revenue stream for the French dairy giant and the company is consciously developing the business alongside its dairy acquisitions. The nature and image of juices fit well with the health and wellness consumption trend and also match its corporate marketing message of “nutrition and pleasure”. It is not uncommon for a packaged food company to expand into juices. Heinz, for example, leads Australia’s juice category, underpinned by the Golden Circle family brand. However, taking into account all the challenges and opportunities, Lactalis still has plenty of work to do in juices.

Asia Pacific is the key region for RTD coffee globally, accounting for nearly 80% of global sales. Much of this is due to Japan, with sales of USD11 billion.…